2015 is poised to be the year of the Solid Snake. There’s almost always a reason to be hyped for a new MGS game, but Metal Gear Solid V: The Phantom Pain looks like Hideo Kojima’s greatest title yet. While we can’t yet say whether it will live up to the hype, we can definitely say that about existing games in the series. Metal Gear Solid: Peace Walker for the PSP is a prime candidate, as Ground Zeroes is a direct sequel. If you were a fan at the time then you may recall the immense push Sony made for the game, with not one but two Peace Walker-themed PSP systems.

There was the Limited Edition Metal Gear Solid: Peace Walker Entertainment Pack, which came with a dark metallic green PSP, a movie download, a copy of the game, and a 4GB memory card. Beyond that was the Big Boss Pack, and despite the lack of “entertainment” in its title, it still included all the same goodies – with a little extra as well. The biggest difference (as far as console variant collectors are concerned) is that the PSP is camo print rather than solid green. 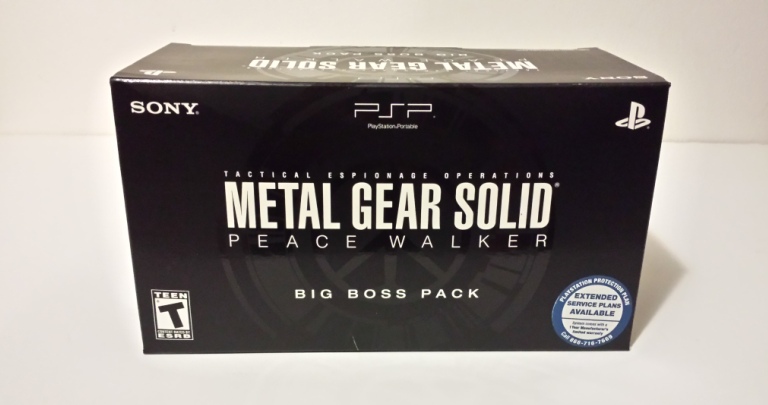 For the curious, both bundles include a PSP-3000, which was the last version to include a UMD drive. Camo looks a little silly on a gaming handheld, but the paintjob is solid nonetheless. Despite many rigorous play sessions the print has yet to wear off or chip in any noticeable way. Outside of the varied color scheme, everything else remains the same. The XMB theme is standard as well, unfortunately – a custom theme would have been a nice addition. Unlike modern day digital bundles, this comes with Peace Walker on a physical UMD in a small cardboard sleeve. There’s also a copy of its, manual included which is identical to the insert from retail versions of the game.

Another stand out of the package is an appropriately themed soft case for PSP. This exclusive item features a Metal Gear Solid logo on the tag, an outside pocket, and a soft lining inside. The only othe accessory is a 4GB Memory Stick Pro Duo – again just your typical Sony-branded memory card, though it does contain two pieces of DLC for Peace Walker. You can wear a FOX t-shirt in game and brandish a stealth gun weapon – two nice bonuses for hardcore fans. The DLC was not included in the other PSP bundle, either. 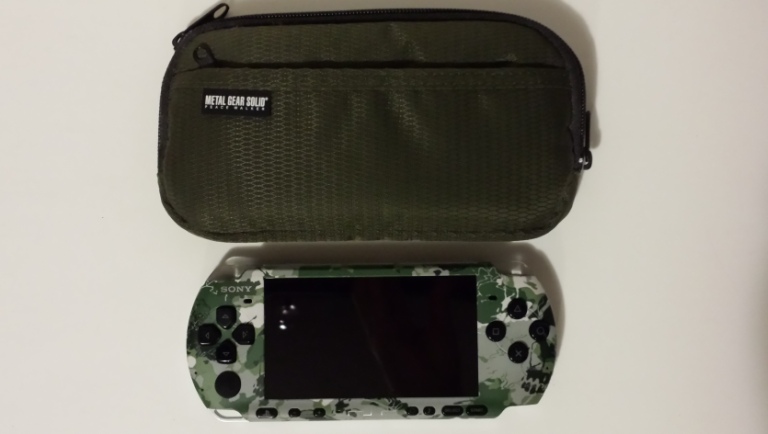 The strangest thing about both packages is the inclusion of a PlayStation Network voucher for the film 2012. It was a Sony Pictures release, but aside from the fact that Roland Emerich is Hideo Kojima’s favourite director, it has nothing to do with Metal Gear Solid. Both bonuses are advertised via cardboard flyers with a code on the back. As does every other PSP model on the market, the Big Boss edition also includes a PSP manual and advertisements for other Sony products (headphones, headsets, etc).

There’s not much reason for gamers to seek out a PSP – let alone the Big Boss pack – considering they can simply pick up the Metal Gear Solid HD Collection for PS3 or 360 and play Peace Walker there (,oddly the game is not included on the Vita collection). Those who still want the “authentic” portable rendition can instead purchase Peace Walker on PSN for a much lower asking price. In all, the Big Boss Pack is a nice piece for Metal Gear Solid megafans and console collectors, but that’s about it. 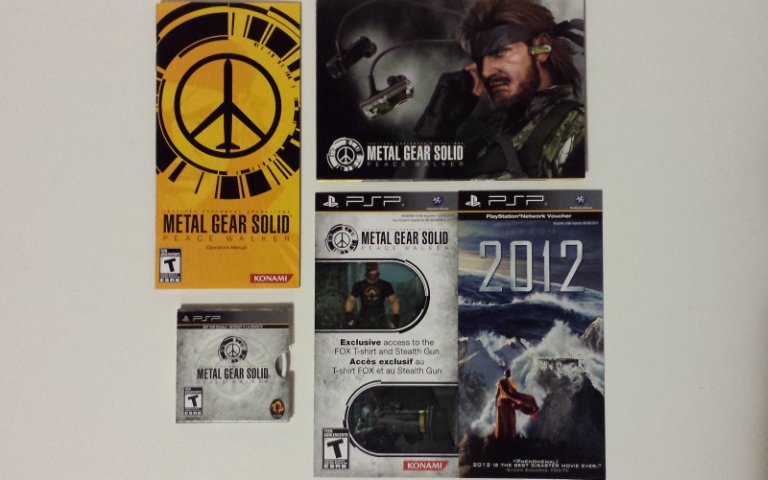