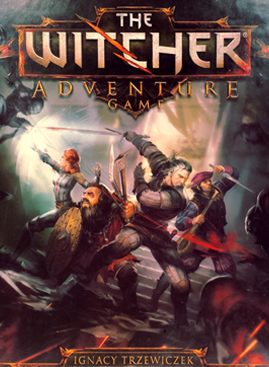 If you’re looking for something to keep your hands busy while watching TV, I can think of few games better suited than The Witcher Adventure Game. As a PC port of a board game, its turn-based nature and relaxed playstyle mean that you can multitask while playing it without missing a beat. In fact, I would advise that you play it this way, because there isn’t really enough here for the game to hold your interest by itself.

The Witcher Adventure Game takes place across the vast expanse of the Northern kingdoms, a setting that should be very familiar to fans of the games and books. Players can take the role of four prominent heroes from the series: the eponymous Witcher Geralt of Rivia, the talented (and womanizing) bard Dandelion, the powerful Sorceress Triss Merigold, and the thick-skinned dwarven warrior Yarpen Zigrin. Each of the four heroes races to complete quests as the forces of the Nilfgaardian empire encroach upon the land. In keeping with the themes of the books and games, the flavor text for these quests often concerns noble scandals and shady business dealings, but ultimately all of them boil down to running around the board collecting points.

There are many different kinds of points in The Witcher Adventure Game – red, blue, and purple investigation points, action points for items, and gold – but only one type ultimately matters: victory points. Victory points are generally acquired by building up other point totals to fulfill quest goals – for instance, you might be able to trade three blue lead points or three gold pieces for three VP if one of your sub-quests allows it. You can acquire leads and gold by travelling around the map (each city you visit rewards you with one or more different colors of lead) and performing investigations, but as you do you need to be ever wary of the foul fates that might befall you – as well as the vicious monsters that roam the world.

Combat in The Witcher Adventure Game all comes down to dice rolls. Each character has a set of combat dice, with each side marked by a sword or shield. In battle you want your number of shields and swords to beat the threshold of the monster you’re facing – generally beating their sword total nets you some sort of reward (ranging from gold to victory points), while falling short of their shield total means you’ll be hit with some kind of penalty. Combat is far from pure luck – each character can develop items that help them in combat, generally by increasing their roll totals. These developments suit each character’s personality and skill set – Geralt can brew potions and craft Witcher marks, while Triss can prepare spells and use magical objects – and lend each of them their own distinctive playstyle. 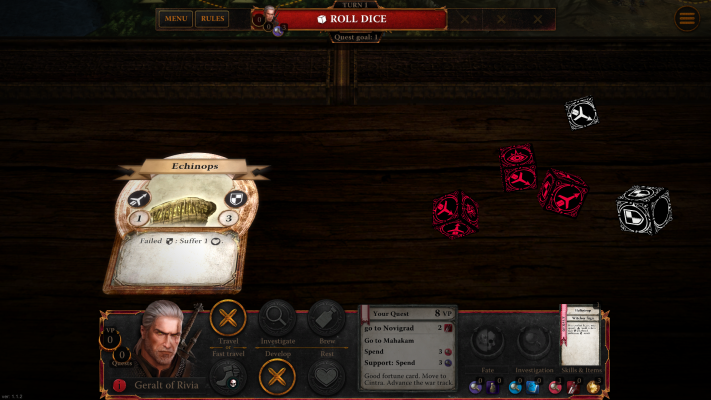 Ignacy Trzewiczek has done a great job of systemizing each character’s particular quirks. Geralt is fast  at completing quests and earns some suitably high rewards for his efforts, but he can quickly run into trouble if he’s not careful. Yarpen is tough, able to endure two wounds before he even starts to feel them, and he can complete a large number of small tasks in a turn by calling on the help of his fellow warriors. By contrast Triss is something of a glass cannon, easily decimated by enemies early on, but as she spends time preparing spells she can easily become a powerhouse. Dandelion has the unique ability to earn money with his singing, and he also can find some unique encounters by investigating – many investigation cards depict his lovers, and he gains additional rewards (or on occasion penalties) when he draws them.

If this all sounds rather complex, that’s because it is, but don’t mistake that complexity for depth. You’ll draw a lot of cards – often adorned with lovely art and entertaining flavor text – and accrue many different resources as you play, but it all ultimately boils down to a race for victory points – everything else is just a means to that end. You can mitigate risks using development cards, but what quests you get, what investigation cards you draw, and even what developments you have at your disposal are all ultimately left to fate. Even worse, there’s almost no interaction between players, save for specific random effects that can affect everyone. Behind a smokescreen of special cards and dice (and there are a lot – the physical version of the game is a bit of a nightmare), The Witcher Adventure Game ultimately has little more strategic depth than Snakes and Ladders. For a game meant to spearhead GOG’s online multiplayer client, a complete lack of player interaction is more than a little distressing. 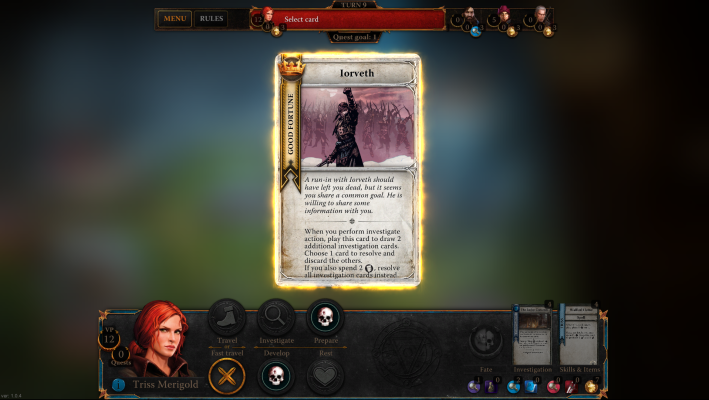 Despite the fact that players are essentially racing each other to finish a game of solitaire, The Witcher Adventure Game doesn’t fare well as a single-player experience either. The AI is rock-stupid, and even playing at a leisurely pace you’ll have left it in the dust by turn ten. That doesn’t stop the computer from playing out every turn after you finish yours, however, and that play isn’t even accelerated, so for every two minutes you get to interact with the game board, you’ll spend three watching the other heroes bumble around the map. You can disable all computer-controlled characters and play solo, and that’s probably the best way to experience the game’s engrossing lore and stunning hand-painted visuals.

If there’s one thing I’ll say for Can Explode Games, it’s that they know how to present a digital board game. The topography of the Northern Kingdoms pops up from the stylized game board in an appealing fashion, and particle effects like rain and fire help to bring the action to life. Around the board you’ll see goblets and other random objects you might expect to find in a tavern, and upbeat music plays in the background. Details like this, as well as the fact that the dice are rolled with real physics, help to make the game strangely immersive. Unfortunately, appealing as it is to look at, the art gives rise to some troubling UI issues. It can be difficult to find a specific city on the map or even tell at a glance how they’re all connected, and to compound this you can’t even look at the board when deciding which quest to take next – more or less the only strategic decision you get to make at any point during play. 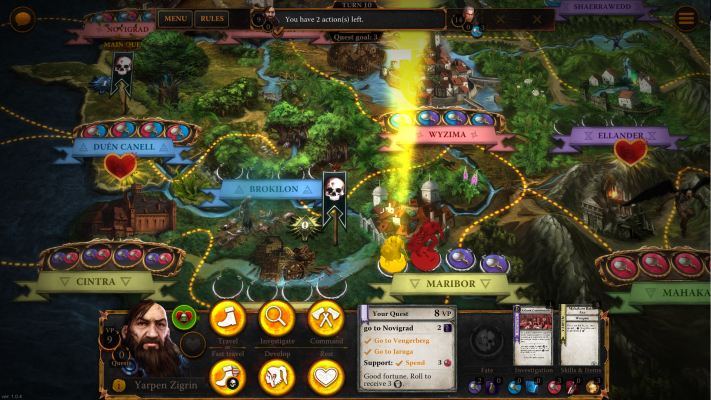 The Witcher Adventure Game takes everything from the tabletop game of the same name and digitizes it, with a great deal of attention paid to aesthetics. Unfortunately, the board game being emulated here is poorly-designed, and the gorgeous visuals sometimes get in the way of its functionality. As a multiplayer title, it doesn’t bring much to the table, and once you’ve run through with all four characters you’ll have exhausted everything it has to offer. The physical version of the game might make a nice showpiece for die hard Witcher fans, but the digital version doesn’t even have that benefit. There are far better uses for both your money and your time.