There’s an old Japanese saying I made up for this post that fits Team Ninja’s latest leak like a blouse and pleated skirt: “with no more schoolgirl, there is no more game.” That said, it also stands true when you consider the plethora of costume options featured prominently (often as selling points) in Japanese games. Team Ninja clearly means business.

The new character, which was teased in a ridiculously small shot of this weeks Famitsu, is named Honoka. There’s little info about her other than that she’s a schoolgirl and has some sort of unknown power. And she has pink hair, of course.

Fans of the series (and big-breasted, under-dressed and beat down-capable ladies) won’t have to wait long for more information, not to mention the entire game. Dead or Alive 5: Last Round drops on PlayStation 4, PlayStation 3, Xbox One, Xbox 360 and PC in February. 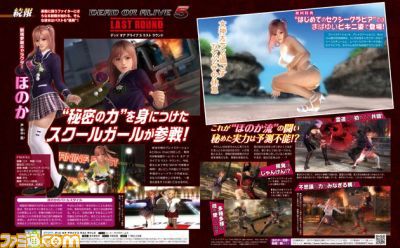