Assassin’s Creed has had bad lucks with leaks (and Kotaku). The last three Assassin’s Creed game have been leaked, with Unity and Victory (likely) being leaked months ahead of their reveal and Black Flag being spoiled inadvertently revealed by a marketing rep sitting next to a journalist on a plane. All this time, however, it’s possible that the locations of the next Assassin’s Creed games have been sitting right under our noses this entire time.

Ubisoft Forums user Cornik22 has discovered that a page of concept art might have given away the locations of every Assassin’s Creed since Black Flag. A piece of concept art drawn by Ubisoft artist Martin Deschambault shows a Abstergo Entertainment lobby with a huge flat screen in the background that features multiple fragments of areas from around the world. But here’s where it gets interesting; every fragment can correspond to a game in the series:

Assassin’s Creed Victory (The Houses of Parliament and Big Ben in London):

As you can see, everything matches up. Except one image, that is, which is the most exciting yet. Sensoji Temple, Tokyo’s oldest temple, is shown in one of the image fragments:

If this is indeed more than a coincidence, it looks like Assassin’s Creed VII could be heading to the Land of the Rising Sun. This would make sense as it’s an area of the world conspicuously missing from the series and fans have been begging for it for nearly a decade.

The crazy thing about all this is that the concept art has been published in multiple things including Assassin’s Creed Unity: The Complete Official Guide, The Art of Assassin’s Creed IV: Black Flag and Abstergo Entertainment: Employee Handbook. 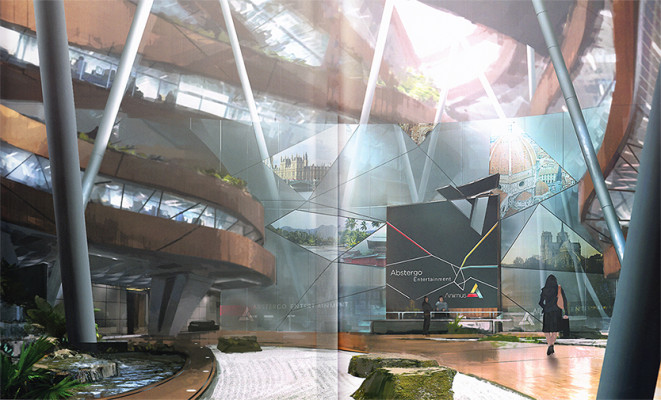