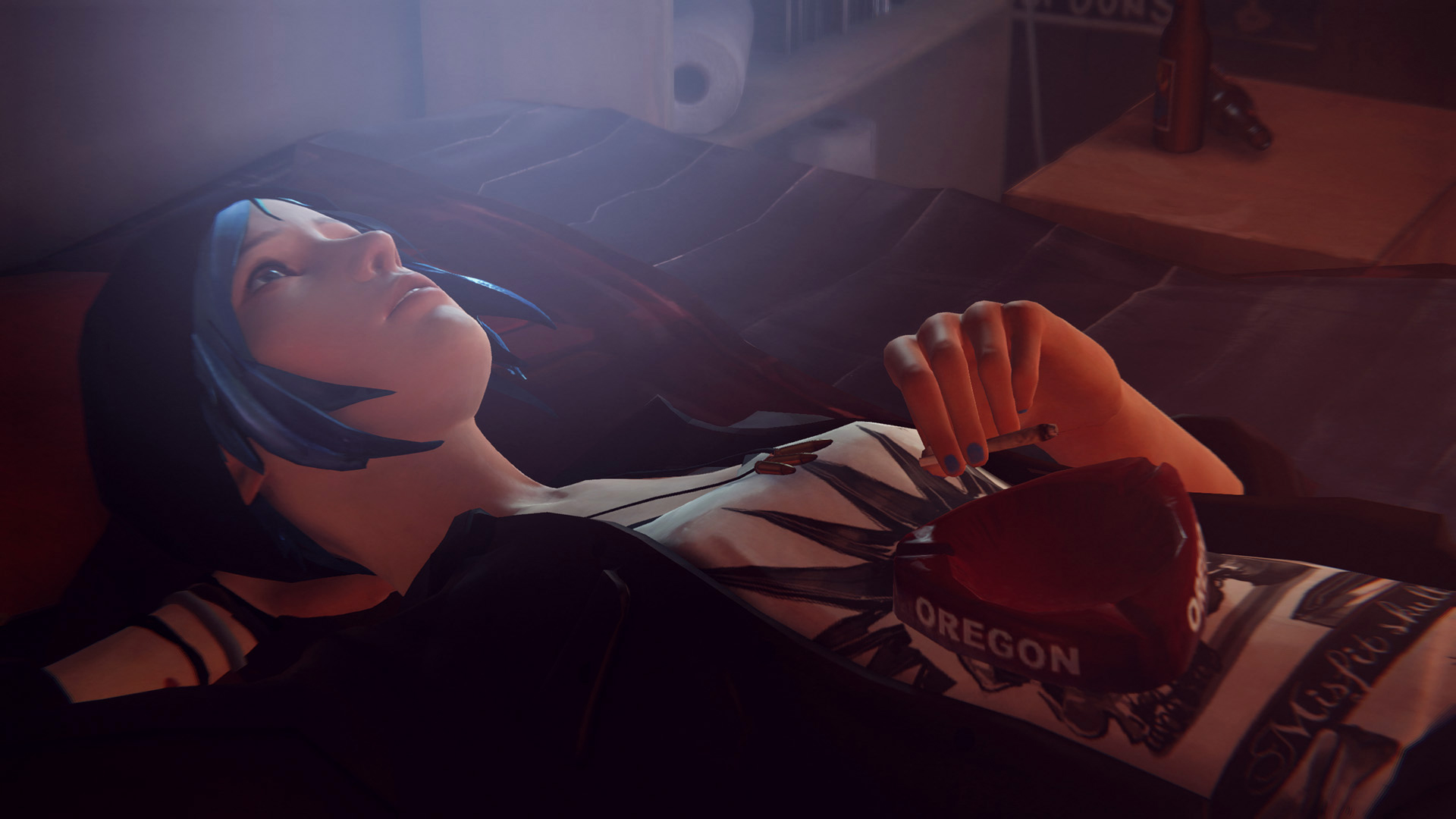 Life is Strange presents what might be the single most appealing power fantasy I’ve ever seen in a game. When we consider abilities like time manipulation, we mostly think in terms of superheroics and disaster prevention. There are certainly elements of that here, but 18 year old Max Caulfield uses her gift primarily to navigate the social minefield that is senior year in America. That, to me, is infinitely more relatable than, say, using my ghost twin’s Angry Birds powers to save the world. Back in my own high school days, right after I played through Prince of Persia: The Sands of Time HD, I would reflexively twitch my left index finger in response to embarrassment. At that time I would have given anything to be Max.

Max is quite the atypical protagonist – at least in the gaming space – a shy, geeky girl with a knack for taking pictures. After living for five years in Seattle, she finds herself drawn back to her home town of Arcadia Bay, Oregon to attend Blackwell Academy, a prestigious high school with a photography class helmed by a world-famous photojournalist. She believes that she’ll be able to start fresh there among students with similar bohemian sensibilities, but she quickly finds the campus to be infested with the same cliquey nonsense that permeates the entirety of the American school system. Up to this point she seems to be living the life of a John Green protagonist, but after run-in with a gun-toting preppy boy she discovers that she can rewind time at will.

Beyond simply working as a plot point, Max’s time manipulation powers do a lot to enhance the Telltale-style adventure gameplay. There are a few interesting dialogue and inventory puzzles that involve rewinding time to keep items you shouldn’t have or say something you shouldn’t know, as well as some interesting investigation scenes where you can erase evidence of your snooping by reversing the clock. More interestingly, the abilities allow you to instantly go back to any moral choice you might regret – a welcome change for anyone who’s gone through reloading their save in The Walking Dead. In regard to the moral choices, there is one moment of inconsistency in how the powers operate (Max ought to be able to keep a photograph that she takes after she rewinds time to intervene instead) but for the most part they feel great to use.

Much like the work of Quantic Dream and Telltale, Life is Strange applies cinematic techniques to its choice-driven narrative, but where those developers constantly borrow from Horror movies and Thrillers, DONTNOD (creators of the action game Remember Me) has drawn from different sources entirely.  For the most part they ape the style of hipster films like Juno, (500) Days of Summer, and The Perks of Being a Wallflower. Like most those movies, the plot reads like something out of a YA novel – a young woman with artistic sensibilities trying to find herself after transferring to a boarding school in a small town. The injection of time travel into this mundane setting keeps things more interesting than your standard coming-of-age story. In this, the plot has a lot more in common with the films of Mamoru Hosoda than any specific Sundance nominee, but the influence of those Western films is more readily apparent in its HDR visuals and shaky cinematography.

With sketchy title fonts straight out of Nick and Norah’s Infinite Playlist and an eclectic licensed indie soundtrack featuring the work of Syd Matters, Mogwai, and Alt-J, Life is Strange certainly nails the indie movie aesthetic. The game can match the very best indie films in its application of that soundtrack, with Max using her headphones to drown out the world, or relaxing in her room for a moment before continuing with her day. Hell, even the UI incorporates the chalky white diagrams and sketchy writing that typify zine culture, and it does so a lot more effectively than the similarly-themed Gone Home. It’s hard not to draw comparisons between this and the Fullbright Company’s award-winning ‘90s house simulator. Both are thoroughly entrenched in millennial culture, though Life is Strange is noticeably more modern and much more effective at capturing the voice of youth.

The kids in Life is Strange spend their days coping with social pressures, bullies, and gossip. But they also lose themselves in their hobbies and creative endeavors. They strive to establish their identities, and they’re becoming increasingly aware that their bitter feuds with fellow classmates will ultimately be meaningless – even if they explode all over social media. This is what it’s like to be a senior in the new millennium, simultaneously conscious of and oblivious to the world at large by virtue of exposure through the internet. It’s one thing for these characters to use the right slang or references (and they do – Max texts “kek” instead of “lol” and namedrops Fullmetal Alchemist and Scott Pilgrim), but it’s far more important that they think the right way. Little things, like using the pause menu to have Max shoot off rapid-fire texts to friends, or taking selfies, make the insular world of Blackwell academy feel infinitely more believable than anything written by Diabolo Cody.

There are moments where the high-school melodrama becomes a little overplayed. Max’s snooty rich girl nemesis Victoria comes across as something of a cackling witch, and though you do see one moment of genuine humanity from her (assuming you make a certain choice), it’s almost immediately undermined by an act of wholly senseless cruelty. Toward the end of the episode, a pot-smoking punk chick gets into an argument with her step-father that climaxes in a very stereotypical slap across the face – followed, of course, by a panicked apology. It’s kinda true to life, sure, but arguments like that don’t need to culminate in violence to be stressful, and just once I’d like to see a film or game tackle the less obvious elements of domestic instability. For the most part, though, the game is subtle with its drama, and even some of the heavier moments (in particular a scene where a character recounts an experience with date rape) are remarkably effective.

The drama is the focus of this establishing episode, and I hope that it remains in play as the game continues, but some time is spent establishing an intriguing overarching plot. In addition to rewinding time, Max’s powers seem to allow her peeks into the future, and in them she sees an enormous tornado bearing down on Arcadia Bay. Additionally, there’s a mystery at play concerning Rachel Amber, a missing girl who used to attend Blackwell. The circumstances of her disappearance echo Twin Peaks’ Laura Palmer, though at this point it remains to be seen if she’s actually dead. Like a good TV pilot, Chrysalis lays a lot of plot threads that I’m eager to tie up in future episodes. Life is Strange has me hooked.

It’s very tempting to dismiss Life is Strange out of hand as the same pretentious pabulum that it emulates, but the affectations of hipster cinema prove essential to its narrative goals. DONTNOD’s sophomore effort aims to capture the voice of today’s youth, and outside of a few heavy-handed moments it succeeds. Anyone who went through high school in the last decade is likely to find themselves overcome with nostalgia as they play. Few games – hell, few films – are so genuine and earnest in their execution, and few first episodes of anything are so effective in leaving you wanting more.