This week Japan’s Weekly Famitsu published a page spread on the hottest items available from UFO Catchers (also known as the “crane game”) everywhere.  Unlike the tragic fate of arcades in America and Europe, Japan’s “game centers,” as they often referred to, are quite popular and consistently rake the cash.  Even in the loneliest of areas and desolate countrysides, you can often find at least one bustling game center either owned by Taito or Sega of Japan.  In the streets of Tokyo’s popular Akihabara shopping district, a game center can be found on every street corner.  The clientele?  Pretty much everyone:  elementary school students, giggly high school girls, and elderly salarymen.  If they have one thing in common, it’s that they all love to play their hand at the UFO Catcher game.

For a 100 yen (about $1 in the USA) a play, you can make an attempt to win one of these extraordinary prizes.  Of course, the odds are against and that’s quite a steep price…but, trust me, you’ll want to try again.

Check out the image below: 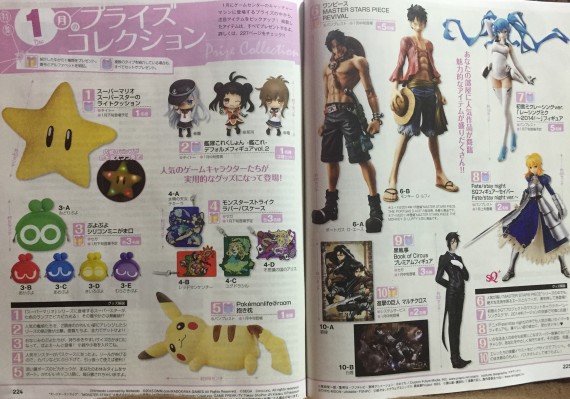 Anyway, I have translated the list.  Here are the most sought after items and their associated game centers: