Today is a day for happy dances because, for the first time in decades, there’s a new Wonder Boy in Monster World game in the works.  The journey there is a bit roundabout and it’s had a  name change due to Sega owning the trademark, but the series creator and designer Ryuichi Nishizawa is heavily involved so that’s good enough for me.  Long story short, here’s what happened-

There was a game called Flying Hamster made by Game Atelier, with releases on PSP and mobile devices.  It was a horizontal shooter starring, obviously, a hamster, and it did well enough to warrant a sequel.  Flying Hamster II got a Kickstarter, and it was to be a Wonder Boy tribute.  While it was going to fall short of its goal, the game still managed to wind up a success due to getting picked up by a publisher.  The last Kickstarter update was July 10, 2014, and then everything went very quiet.  A few months later, over in Japan, Wonder Boy’s original developer Westone went out of business. 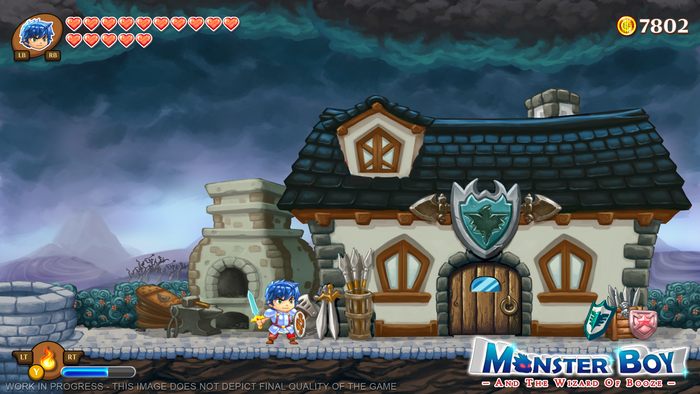 While details on how Nishizawa ended up with the project after Westone folded are nonexistent, the result of him being heavily involved in development means that, though the name has been changed, this is an actual Monster World game.  Admitted, Monster Boy and the Wizard of Booze isn’t a name that inspires confidence, but there’s some excellent talent working on this game to hopefully see it rise above its unfortunate title.  In addition to Ryuichi Nishizawa’s involvement, Michiru Yamane (best known for her tracks in Castlevania and Suikoden) is providing several pieces of music.  The Wonder Boy in Monster World series has been gone far too long, and if it takes a bit of re-naming to see it revived, that won’t be any kind of problem at all so long as the new game lives up to its legacy.