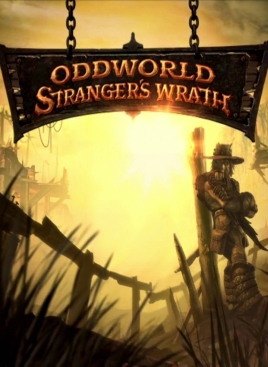 The Oddworld series was a highlight of the PlayStation 1 and its move to the PlayStation 2 seemed like a foregone conclusion. Before the release of Munch’s Oddysee, however, it was revealed that all Oddworld games would be Xbox exclusives for consoles thanks to its superior horsepower. This arrangement resulted in Munch’s Oddysee being a launch highlight for the platform, while Oddworld: Stranger’s Wrath took things in a bold direction. Instead of starring as a bizarre green creature solving puzzles, you’re Stranger — a kick-ass bounty hunter with a thirst for money and a love for bringing in bounties for a hefty price. Bringing them in alive nets more money, but sometimes that isn’t an option.

In order to accomplish your goals, you’ll have to either punch them out in third person with a tornado spin punch or get into the first-person viewpoint with the right stick and slug at them or shoot them with ammo. Unlike every other FPS on the market even today, ammo isn’t bullet-based. Instead, little critters are killed around town or stunned and socked them on the double-barreled crossbow. While Stranger’s Wrath doesn’t have dual-wielding, each barrel can shoot a different kind of ammo — so you get the similar “one side does one thing and the other does something different” effect. Ammo can be mixed and matched in a variety of ways. Sure, it’s tempting to just shoot enemies with it, but there’s more finesse to be had here. If you’ve got the right critters in your crosshairs, you can set a trap for enemies and still get a kill that requires a bit more forethought. They’re harder to get, but more rewarding.

Shooting and the variety of first-person combat is where the game shines, but it falters a bit with platforming. The camera is a bit unwieldy even with customized axises. Tilting to the side to get a more 2D side-scrolling-esque view doesn’t do any good because it just spins around anyway. The left stick movement controls are fine, and the overall button layout is logical although the on-screen blue U button prompts for bounty catching should be made a little darker as it resembles the home button far too much. The actual bounty missions are a bit too samey, but you will get a healthy mix of shooting, puzzle-solving, and even a bit of stealth thrown your way in them. With ten years of age, the lack of combat variety hurts the game slightly, but the combat will hold your attention longer if you focus on a trap-heavy setup instead of just using weapons directly. 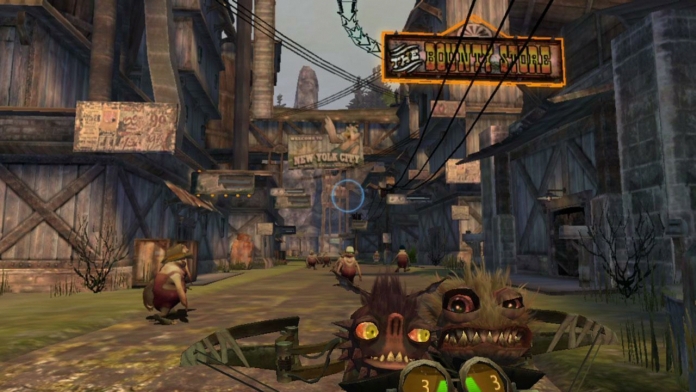 Even with so much time passing since its original release, Stranger’s Wrath stands out because there haven’t been a sea of Western-inspired games afterwards. We’ve seen Red Dead Redemption and that’s really about it other than GUN hitting towards the end of the original Xbox and beginning of the 360’s lifespan. While first-person shooters have been done a lot, a first-person adventure like this hasn’t been done nearly as much since you have a mix of world exploration, shops almost (but not exactly) like an RPG, and then the shooting and fighting mechanics. Stranger’s Wrath blends most things together fairly well and nails the Western theme perfectly.

Visually speaking, Stranger’s Wrath on the OUYA looks somewhere between the original Xbox release and the HD version. It retains the widescreen aspect ratio of the re-release, but features worse-looking cutscenes. The video footage appears to have been compressed quite a bit, which makes sense since this is a 1GB download and the original Xbox release took up far more space than that on a disc. The compression doesn’t kill the graphics, but does make this feel like a fairly cheap product instead of an inexpensive one — and that’s never good. It’s still aided by fantastic world design though, as there’s some stunning architecture hidden underneath the iffy texture work. 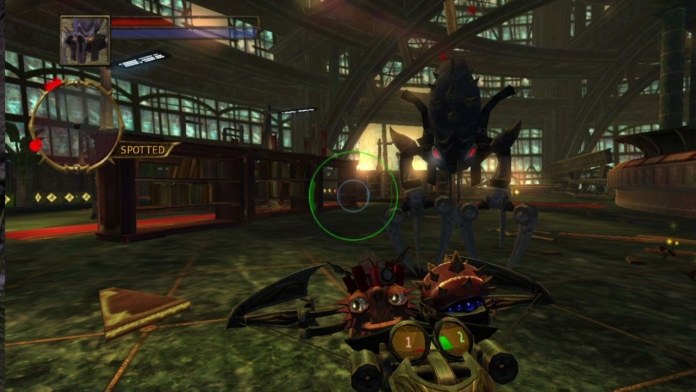 The biggest issue with the game’s graphics is that you can only run them at about 50%. Like a PC release, there a lot of different settings you can tinker with, but the end result is a fairly unimpressive-looking game that looks a little better than the original Xbox version, but doesn’t touch the HD version. Since this is a mobile port and mobile devices vary quite a bit in terms of power, having PC-like settings for everything under the sun makes sense there. However, on a console with a fixed set of specs, it makes less sense and makes this come across like a poorly-optimized version of the game. If you don’t keep the settings at around the halfway mark, you’ll get stuttery, unplayable gameplay. While this option does make some sense in case a successor to the OUYA comes out, or OUYA Anywhere devices enable games to run better there than on the native device, that doesn’t do much good now. If it winds up being future-proofed as a result of this, then great — but here, that doesn’t help.

Fortunately, while this incarnation of Stranger’s Wrath hits some sour notes visually, it’s a joy to hear. The Western-heavy soundtrack perfectly suits Stranger and the voice work is superb. Stranger sounds like what you’d imagine a mutated version of Clint Eastwood in his prime would, but has a bit of a Southern drawl that helps the character stand out a bit more. The ammo sound effects are varied, and beyond sounding different depending on what critter you use, the critters themselves let out different howls as they’re hurdled towards enemies. 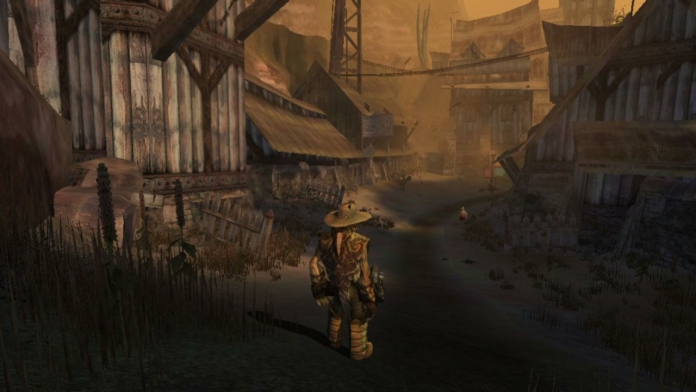 While Oddworld: Stranger’s Wrath on Ouya isn’t quite as good as any other console version of the game, it is still recommended for those yet to play it. It’s greatly hurt by being less-impressive than the original game was, let alone 2011’s HD remake, but the experience is still one that any gamer should undertake if they love a unique concept and Western movie-style storytelling and characterization.