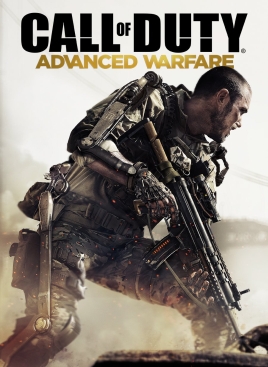 In an alternate Call of Duty: Advanced Warfare timeline, Atlas’s bomb drop made things go from bad to worse. A zombie outbreak is now unleashed and killing all in its wake. A small team of survivors are out to end the outbreak via wave-based combat starring a new cast of characters. They’re voiced by John Malkovich, Bill Paxton, Rose McGowan and Jon Bernthal of The Walking Dead fame. The story is minimal and that’s not really a bad thing as shooting things is what matters and the online co-op-heavy nature of the outbreak story mode keeps the pace fast. Outbreak places you a small area and teams you with up to three other people as you fight wave after wave of foes. You’ll start off with easy folks that exist to be killed before moving onto crazed zombie dogs, jumping zombies and super-powerful ones powered by exo suits that can infect you.

The infected have to haul-ass to a decontamination zone or face inevitable demise. Similarly, death can come quickly when ammo is depleted. It’s a scarcity in this mode, with replenishing power-ups around the map being the only way to get more. The key here is to mix action and stealth — so those with an ally shooting away can come up from behind and either stab or punch enemies to death. In-game currency can be used to activate traps like security laser beams or move around the map with shortcuts. Traps can really come in handy, though, so most money should be directed towards them. There are also decontamination zones that can both help you and kill enemies. Those wanting to be a decoy can hang out near that area and just wait for infected to swarm and then kill them with one blast. It’s risky, but it’s an easy way to rack up kills for those with a ton of ammo. Exo Zombies is a nice change of pace from the regular game, and is further expanded upon with Exo Survival. 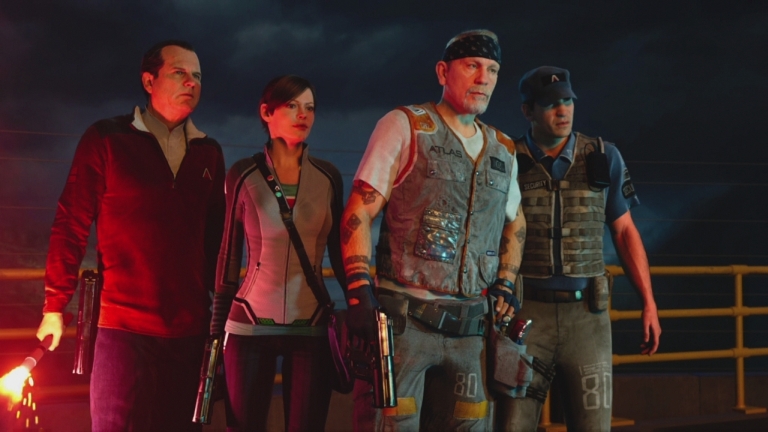 Exo Survival is back and pits players against a variety of enemies in waves, but grants a large team to do it with. Rounds are only a few minutes each, so folks are on a mad dash to rack up kills. This frequently leads to people making mistakes, or needlessly spinning around to try and find everyone. It’s a laugh riot at times, and a real team-builder too since the small maps ensure that there should always be at least one person nearby to act as a medic. The zombie stuff is nice, but feels like something that should have been a free upgrade since it’s just wave-based combat and doesn’t have much depth to it even if the new voice acting performances are good. Exo Survival is quite worthwhile though and a fantastic addition to the game.

Beyond a fantastic survival mode and zombie-related shenanigans, the Havoc DLC pack includes four new maps that you can play online and even take part in Exo Survival mode with. Sideshow takes place at the Clown Inn — a circus-theme hotel without a bed and breakfast, but with hazards. It’s run-down with battered buildings, and that works in your favor strategically. If you want to, you can hop on top of a building to get a makeshift sniper’s perch — even if it leaves you open, you can still snipe people running around the parking lot. That area is filled with opened up semi beds, giving places to ambush enemies while you hide for a bit. The apartments themselves work for that as well and give you more room to move so that if you are discovered, you aren’t trapped. There’s even a clown head sign that explodes and can kill you instantly. It’s a fun map that is very open, easy to explore, and a highlight of the pack. 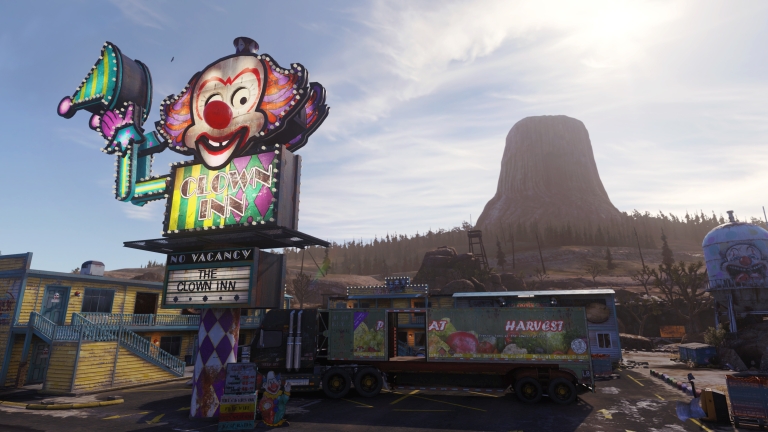 The Drift map is set in a ski resort and stands out immediately thanks to its setting. It’s covered in snow, has a lot of real-life areas like a gift shop and cashier’s area that can be used to your benefit. The whole area is filled with small areas that would theoretically be good for a waiting game, except that they’re accessible fairly easily from another major point on the map or a respawn point. The Core is an industrial area full of busted-up pipes and turbines alongside hidden passages. It appears to be a former nuclear base and is the only sand-heavy area in the DLC. Success and failure are determined by your ability to learn the map because if you don’t, you’re just going to be out in the open in the connecting areas. Urban is a skyscraper-filled area that fits in with Modern Warfare’s maps perfectly. It’s set in a locked down police zone and feels like something out of the the future as seen in the ’80s with hovering cop cars all around the area.

Online, you can engage in either a story-based Outbreak mode, team deathmatch, or the mosh pit where you get a ton of modes blended in so one round might be the Kill Confirmed, where you try to kill then grab a dogtag to confirm it or grab an ally’s tag before the enemy to take that kill away. You can also get the hardpoint mode where you fight to take over territory as the zones change throughout the round and domination where you’ve got the same basic idea, but have to capture flags along the way and the territory is static. The end result here is that everyone knows where things are on the map, which makes the HUD-disabling attacks less useful here when they can be an absolute killer in hardpoint. 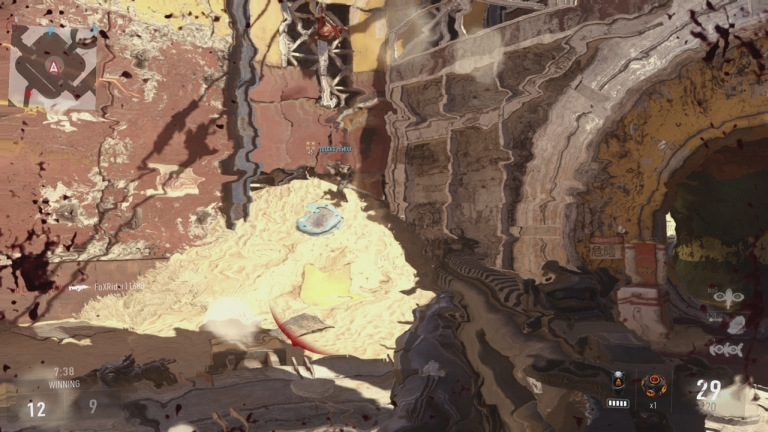 Each map plays off of the various modes different, with sideshow being perfect for the territory modes because of how split up it is. You’ve got a car wash area, the motel room area, and the parking lot as distinct zones right away. You get a better feel for how to approach them very quickly since they’re full of areas to explore. Core works perfectly for Kill Confirmed since it’s so full of small areas that you can rack up a few tags in quick succession — someone’s inevitably going to be killed, then get killed and you can swoop in to attack. Close-range attacks are also very handy here because there are some confined spaces at least one opponent will always try to hind in, and you can just jump in and either punch them to death or snap their neck and grab a tag. It’s the only team-based mode where being a bit of a ballhog actually works for you because you want to swipe up as many tags as you can to prevent an opponent from getting it. While it might be unfair for someone who got a kill to have someone else grab that tag, they could easily be killed and if you have a chance to dash up and grab the tag, do it.

The maps all look great and have some impressive sound design too. Core features giant robots trying to rebuild the area along with other loud machinery doing stuff too. What this means is that you can’t always hear an enemy nearby, so you have to rely on having eagle eyes to get kills. However, this area is also full of things moving and your first instinct in an FPS is to shoot anything that moves — doing so here gives away your position. If you’re trailing a partner to ensure that you can get a come from behind win with a small kill streak, you could easily blow your cover and let every enemy nearby know someone is coming — including snipers. 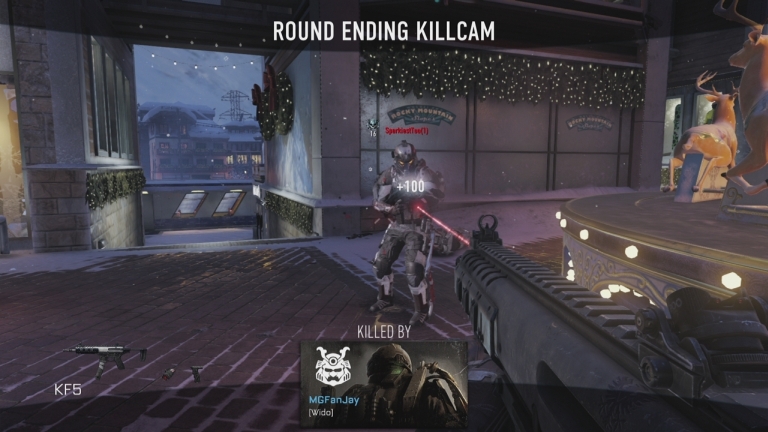 The reworked zombies mode is just one reason to get the Havoc DLC pack. The best reason to get it lies in the four new maps, which have a lot of replay value not only for team deathmatch, but the other modes as well. Each one works perfectly for at least one match type and a couple of them are some of the best maps yet in the series. If you’ve taken a bit of a break from Advanced Warfare, fall back in love with it by picking up the Havoc pack. It’s a solid value given how much time can be spent with the new maps. It’s a shame this DLC can only be enjoyed by Xbox One owners right now, but it’s well-worth owning for those with this version of the game.