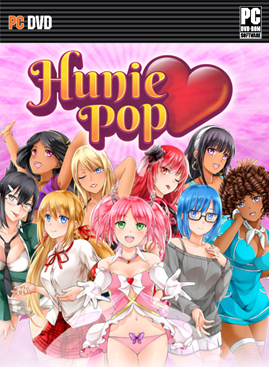 This is a difficult review to write – not because HuniePop is hard to evaluate by any stretch, but because in writing this I have to admit that I played it. HuniePop is one of those “dating simulators” or “galge” (Gal-Games) that’s so popular in Japan, but let’s cut the weak euphemism – it’s convoluted pornography. The goal of the game, such as there is one, is to seduce a multitude of women (the technical term is “waifus”) with diverse personalities and ethnic backgrounds so that they’ll send you increasingly racy pictures and eventually sleep with you. What sets HuniePop apart is that all of this is accomplished through match-three puzzle gameplay – yes, even the sex.

Well, that’s not the only thing that sets it apart. The first thing you’ll notice when you boot up the game is that it looks – and sounds – really, really good. Designer Ryan Koons (an ex-Insomniac employee) brought on a team of supremely talented artists to help bring his filthy vision to life, and the results are plain to see. The game’s interface looks fantastic, and its puzzle visuals can easily stand toe-to-toe with the likes of Bejeweled, Tetris, and Puzzle League in terms of all-important clarity and simplicity. As for the dating sim elements, where most western takes on the anime style tend to be subtly off, HuniePop’s character portraits could give most Japanese eroge circles a run for their money. Not only are they well-drawn, they’re also animated with multiple expressions and lip-syncing to the game’s fully-voiced dialogue.

The voice actresses are mostly newcomers from the sound of things (which makes sense; aside from Dan Green – the star of Yu-Gi-Oh – most voiceover professionals stay away from this stuff), but their line delivery is very smooth and natural – heck, even their fake enthusiasm sounds more convincing than most of the girls I’ve dated. An infectious pop soundtrack from freelance composer Jonathan Wandag rounds out the package, imbuing scenes with a playful, happy mood. All told, these are some of the best production values I’ve seen in any adventure game, let alone a Kickstarter project. 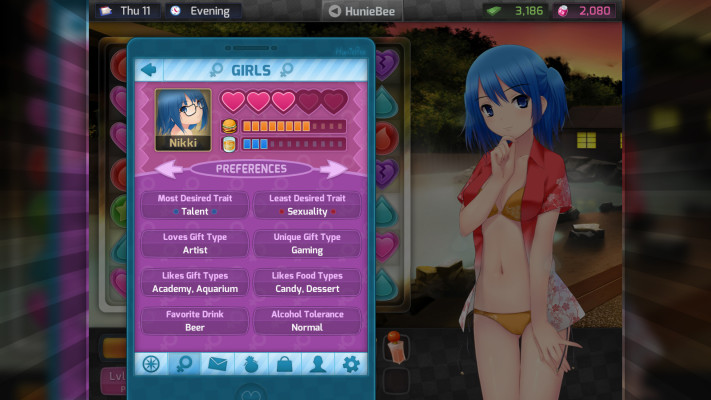 In HuniePop you play a pathetic, unemployed loser – male or female, the choice is yours – who spends the day in their room playing video games and only goes out at night to drink alone in bars. One night you make a disastrous pass at a cute brunette at the end of the bar, and it changes your life forever. See, that girl is actually Kyu, a pink-haired “love fairy” who makes it her mission to get desperate folks into a sexual relationship. She takes you under her wing, claiming you “will be her greatest accomplishment yet.” Throughout the game Kyu acts as your invisible dating coach, your nymphomaniac roommate, and once you have a few notches on your belt, a potential conquest.

The story is bare-bones, even… no, especially for a dating sim. In most of these games, each girl will have her own story to string the sex scenes together and get you invested in her, but here you just take them out on four dates and then bang them. This is billed as a “gameplay first” dating sim, so this choice isn’t exactly surprising, but it is a little disappointing. HuniePop’s writing is surprisingly solid. The twelve girls all have strong (if stereotypical) personalities, and the conversations that introduce each of them are genuinely hilarious (if a little on the vulgar side). 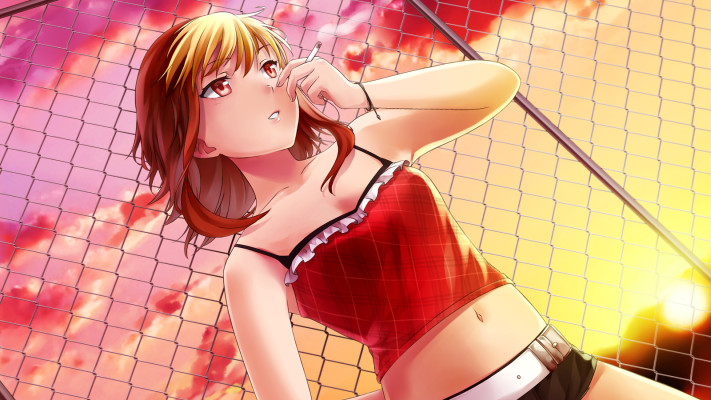 The characters’ interpersonal relationships beg to be fleshed out (if you’ll pardon the expression); for instance, two of your potential girlfriends are mother and daughter, yet there are no scenes where they interact. This game is about the fantasy of being a world-class player, so the total absence of group activity is a baffling omission. You’d at least expect to see the girls fighting over you, but outside the scenes where they’re introduced they never interact with each other at all.

There isn’t even much in the way of original dialogue between you and the girls once you start going out. When you first approach them you’ll get to your choice of pick-up lines (my personal favourite is “I just do whatever the magic fairy that follows me around tells me.”), but after that you’ll be stuck asking and answering the same questions over and over. “What’s your stance on drugs?” “Do you think cheating is wrong?” “What’s your cup size?” – the girls have different preferences for different answers, and they’ll quiz you about themselves to see if you’ve been paying attention, but it all gets old pretty fast. Fortunately, these inane exchanges aren’t part of the actual dating – they just let you rack up “Hunie” points that you can spend to improve your romantic traits. 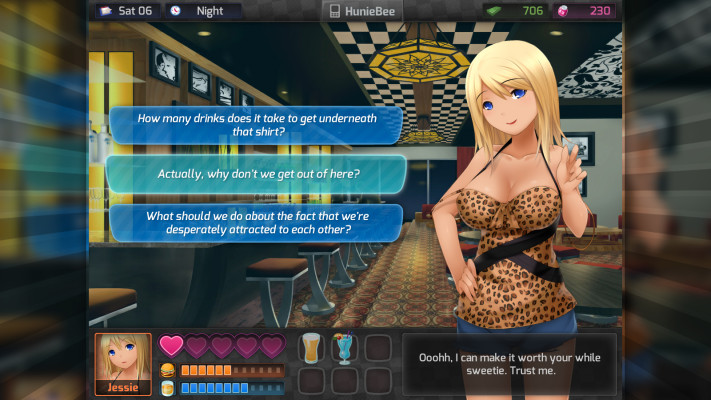 If you want to get into a girl’s pants (and if you don’t, you really ought to be playing a different game) you’re going to need to take them out. HuniePop represents the back-and-forth sexual tension of dating through match-three puzzle mechanics reminiscent of Puzzle Quest. Unlike other match-three games, HuniePop allows you to slide pieces any distance along a row or column to create a match. You might think this would make it overly simplistic, but it actually adds a lot of depth to the mechanics – other tokens in your path will be displaced in a manner similar to characters in Terra Battle, so if you’re savvy you can actually set up insane combos several turns in advance. This takes a lot of the luck out of the equation, placing an emphasis on forward thinking instead.

Your goal on dates is to match four types of “affection” tokens in order to beat a certain point threshold before you run out of moves. Each girl has a preference for types of affection (romance, flirting, sexuality, and talent) that affects the points you earn for clearing them. In addition to the standard pieces, you can connect “passion” tokens to build your point multiplier, or use “joy” tokens to earn extra moves. You’ll want to avoid clearing broken heart tokens at all costs, as each one causes you to lose ten percent of your current affection total. The most important tokens are teardrops representing “sentimentality,” which you can spend to give girls presents. Upgrading traits using hunie increases the effectiveness of each type of match. 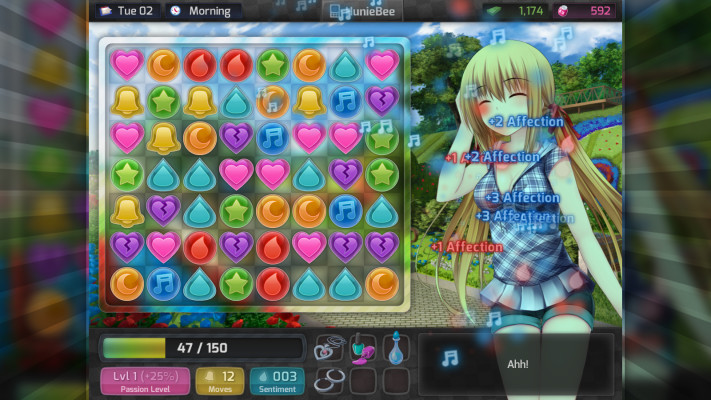 Whether you succeed or fail on a given date, you’ll earn “munie” that can be spent on gifts for the game’s various girls. Food items allow you to continue your conversations for longer by restoring girls’ stamina, while drinks (which can generally only be given at night) multiply the amount of hunie you earn by talking to them. Regular gifts generate a substantial amount of hunie, and you’ll earn double for giving a girl something she really likes. If a girl loves something you’ve given them, Kyu will reward you with a reusable date present.

Presents form the real crux of HuniePop’s dating strategy. Each one acts as a powerup that either dramatically alters the playing field or gives you a persistent bonus for the rest of the date. These bonuses range from increasing drop rates for certain token types to giving you extra turns for matches of four or more. As you play, you’ll discover certain presents that synergize well with each other, and eventually construct a “deck” of six gifts that will give you a major edge. It’s a fun little meta-game that helps to give the puzzle solving legs, but your gift-giving strategy might seem a little odd out of context. For instance, I open each date by giving a girl three pairs of shoes, which allow me to drag the date out while building sentiment so that when I give her a necklace at the end it’ll really knock her socks off.  I also bring a stuffed teddy bear and whale along with me to give to her in case things get out of hand. The mechanical metaphor falters a little here, but that doesn’t stop the puzzling from being addictive. 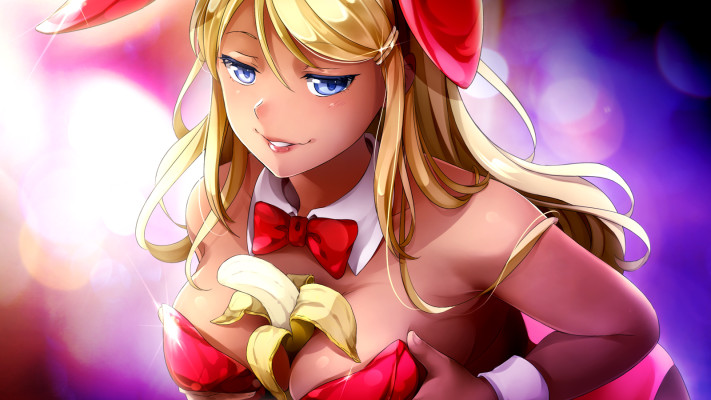 Once you’ve had four successful dates with a girl, she’ll come back to your apartment to spend the night, rewarding you at the end with some TLC. As you might expect from a game with production values like this, the CG images are very high-quality. Character anatomy is spot-on (a rarity in a genre dominated by low-budget Doujin Circles), the sexy poses are interesting and varied, and the artists have managed to capture some seriously erotic expressions. I’ll admit it – HuniePop is freakin’ hot. And despite how little there really is, the build-up of getting to know the various girls actually makes it hotter. Unfortunately, one baffling design decision totally gets in the way of these scenes’ sole purpose.

Before you get to see a girl’s final CG, you have to rock her world, and you do that by speed-matching tokens in a sort of endless mode. This is a neat idea in theory, representing out-of-control pleasure and desire with big combos and huge, cascading chains, but in practice it feels more panicked and tense than fun and frisky. Your point counter ticks down constantly and rapidly, so you need to keep a vigilant eye out for your next match. Stumble for even a few seconds and you may need to start over from square one. It’s more stressful than anything else, which kind of kills any arousal you might be feeling coming off your last date. A more traditional straight sex scene to cap off each girl’s path would probably have been more effective, and it would have made each tryst feel more unique to boot. 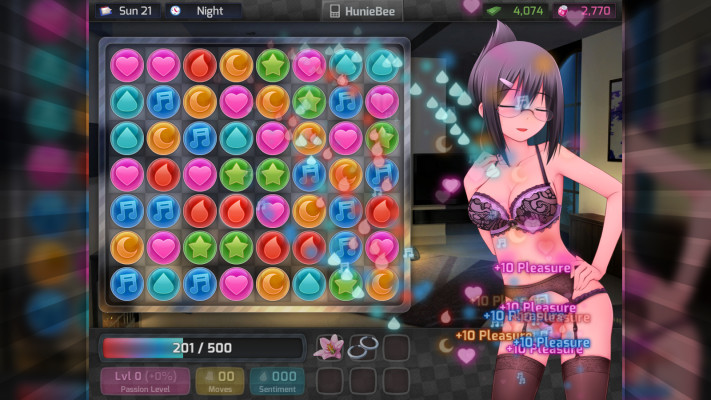 In combining the compulsion of match-three puzzlers with a certain other compulsion we don’t talk about in polite company, HuniePop offers a refreshing and dangerously addictive take on the classic dating sim. At first glance it might remind you of the 18+ Bejeweled knockoffs that litter Newgrounds’ adult section, but it has them beat handily in terms of both mechanical intricacy and production values. HuniePop is pornography – darn fine pornography at that – but it’s also a shockingly good puzzle game. Occasionally those two identities feel at odds with each other, but for the most part they work in concert to show you a good time.