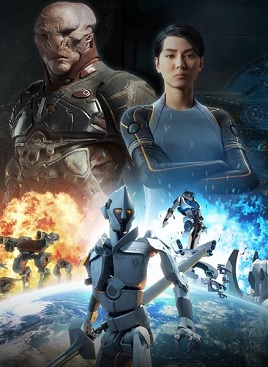 Let’s see if we have all of this correct: units that look like Protoss? Check. Units that look like Terrans? Check. Giant morphing ball of slimy, blitzkrieg’ing robots similar to the Zerg? Check. A general sci-fi tone that mimics that of Starcraft II? Check. Huge mech units that resemble Supreme Commander? Check. An emphasis on macro- instead of micromanagement, with a dash of base-building thrown in to appear a bit like Command & Conquer? Check. Okay. Well, to say that Petroglyph Games’ real-time strategy title Grey Goo has many influences may be an understatemen, but those who borrow from that which works can sometimes synthesize their own patchwork masterpiece. Other times serving too many masters can produce an unfocused piece that struggles to find its own identity. Into which category does this throwback RTS fall?

It’s not too long after diving into Grey Goo’s singleplayer campaign that players will recognize developer’s Petroglyph’s thumbprint in the genre; the game exudes a nostalgic, “they don’t make them like this anymore” charisma, and looks familiar to the above mentioned titles, but also to the developer’s previous work on End of Nations. Thus, from the base-building — though modified and more streamlined system than what’s found in more old-school titles — to how combat is handled, to the design of missions themselves, Goo’s foundation is clearly influenced by a bygone era of real-time strategy benchmarks. Through the implementation of this philosophy the game emphasizes its singleplayer portion more than some other titles of its ilk have as of late, which can be seen right from its introductory video package that sets the narrative stage in a way that only a space opera can. Even down to the meticulously-rendered CGI, it’s clear that Petroglyph wants to tell a story, and was unafraid to spare no expense to accomplish that objective. But more on this later; let’s jump into the meat of the experience.

Gameplay here is what one would expect from a title that is decidedly nostalgic for the classics. Players start off with the ability to build their headquarters and then can begin to erect the structures that earn them resources as well as the chance to issue soldiers to the frontlines. What’s interesting, though, is how Grey Goo handles basic concepts like resource-gathering and the number of constructibles. For instance, all a player has to do is put up a refinery, and resource gathering is automatically taken care of by the AI. There are no commands to issue, it just happens, freeing up folks to allocate their screen time and strategic prowess elsewhere — usually the battlefield. Also, nearly all edifices can only be built and subsequently placed if the pre-requisite structure allows it (this is no different from past games). Where it gets interesting is in the fact that each building ultimately has a set number of add-ons it can produce, most of which have to be attached physically. If these spots on the play-field are already occupied by other architecture, then it means either starting a new camp entirely elsewhere, slowly building back up the tech-tree of that particular camp, or destroying and selling off one of the attachments that wasn’t as vital to the player’s game plan, and inserting the needed structure in its place. These are the small modifications that developer Petroglyph have made in order to give a throwback experience, but one that, though wistful, has evolved with the gaming landscapes of the genre. 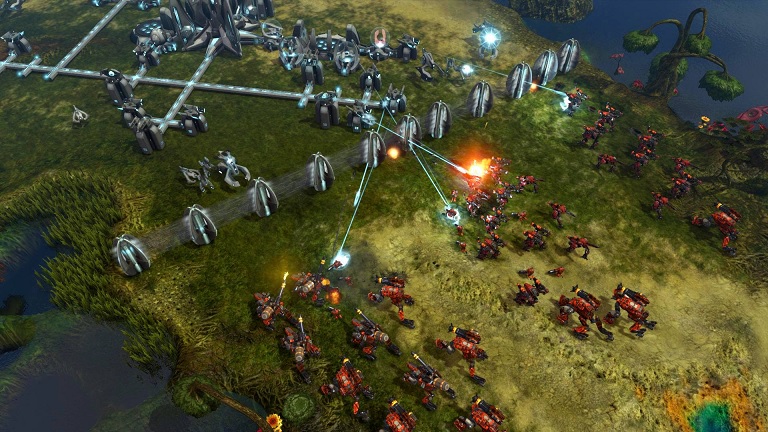 Just with these minor tweaks, it’s easy to see that Grey Goo isn’t a game that finds its rhythm in the nitty-gritty of micromanagement. Instead, it works hard to remain fairly macro throughout, even during combat. In that sense, it feels more like Supreme Commander than something akin to StarCraft II or Dawn of War II. Orders can be given on broad scales and the AI can figure out the rest. Tactical positioning, though, is still key as is a sound attack strategy; without these components, failure is imminent. Combat itself comes down, not to the small orders, but rather adjusting to what one’s opponent is formulating, and then building effective counter-units. This isn’t terribly dissimilar to most RTS games, but the balance with which Petroglyph have found to make the game competitive but still accessible is commendable. After a while, what eventually decides matches is finding the right troop composition, and not how quickly a player can fire-off skills, through glorified MMO hotkey’ing, during scuffles.

What’s also interesting about Grey Goo is its pacing and overall match cadence. This isn’t a zerg-fest, though it’s not necessarily a “sit in the base and amass an army that can conquer a foe in one-fell swoop” either. Yet again, it strikes a harmony between the two, giving folks a few minutes to scout and build structures, then forcing their hand through small skirmishes. Bouts can indeed ultimately boil down to a tech-rush of sorts, each player desperately trying to gather enough resources to start forging their baddest units, but the build up to that point lends itself to a quality back-and-forth tempo. The game can sometimes devolve into who has the bigger army, though this qualm seems more inherent to the genre rather than Grey Goo specifically. It would have been nice if the game figured out a way to mitigate this, but only so much can be done when the very fundamentals of such a game are designed around a specific, time-honored philosophy. 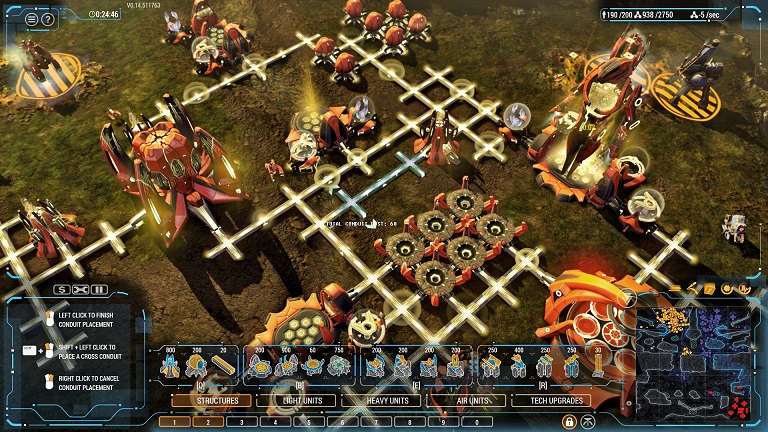 Thankfully, where GG absolutely excels is in its trifecta of races. They each play differently enough from the others to feel worth investigating, just to see if the playstyle aligns with a player’s natural tendencies, and have unique abilities exclusive unto themselves. At their core, they aren’t all that original in that one could draw a line connecting each to those found in StarCraft II, but the fact that they all feel well-balanced is not something to write off. And its that idea of balance that really permeates all of Goo‘s game design; a critical component to any successful title in this classification of games.

Maps, too, play into how things unfold, with plenty of choke points, but also alternate routes, ensuring that there isn’t a one-size-fits-all strategy can’t be implemented. Usually there are multiple approach-paths, which keeps players having to constantly be in a state of hyper-vigilance, so as to make sure all their flanks are covered. Because the speed of matches tends to be a bit quicker than most games of its ilk, it’s then impossible to cover all said flanks, so importance is placed on choosing initial defensive and offensive plans, going forward with them, and then adapting on the fly as the situation changes. This dynamic makes meta-game mechanics like build-order not play as significant a role in a face-off. It’s nice to step away from the very regimented ways of RTS games as of late, and to have something a bit more free-form. It encourages players to flip through different pages of their proverbial playbook, ultimately giving us something that feels fresh. This kind of design was seen in the genre many years ago but got lost along the way as games tried to become more nuanced and/or e-Sport in nature. In Grey, there’s simply more room for experimentation, which in essence feels freeing.

Speaking of old-school RTS ideology, even Goo’s interface is simple. It doesn’t feel overloaded with information, rather uses large, universally understood icons that, despite being functionally recognizable, don’t take up much HUD real estate. This model is two-fold, though, in that it’s easy to understand and thereby navigate, but can look a little low-budget. At first I thought it looked a little “we’re still in beta”-esque, but over time I grew to really love its intuitiveness despite being aesthetically plain. Still, at the end of the day, the game is emphasizing ease of play and this was clearly an intentional decision to further reinforce that concept. 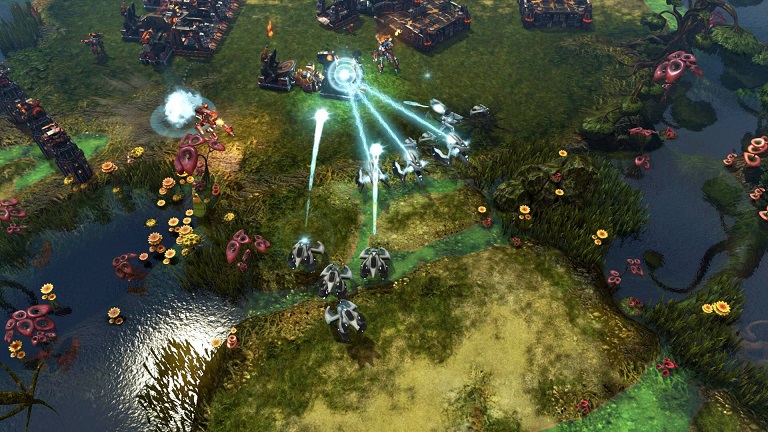 A real-time strategy game is only as good as its pathfinding though. A great title can be broken if troops don’t do what players command, or do so in a way that defies logic. For the most part, Grey Goo has competent AI that will track in efficient ways. That being said, there were a few instances in which our soldiers decided to circumvent what we thought to be the most obvious route, and go through an enemy encampment to get to the destination. When this happened, of course they were utterly destroyed, leaving me frustrated by the lack of control I had over the situation. I began to work around this, though I should not have had to. Mind you, this problem didn’t crop up constantly, but its few showings did enough to leave a lasting negative impression.

Speaking of conflicting aspects of the game, Grey Goo seems to have some performance issues. While it mostly felt optimized, there were times when the game would crash, freeze up, or chug at a frame-rate of less than 10. From our understanding, a patch was implemented (or was about to be), as the forums had more than a few posts dedicated to discussing this complaint. Stability is something that will undoubtedly improve over time, but out of the gates, it wasn’t perfect. We’d argue that no game is anymore, and that such a practice, no matter how detrimental to the game and the industry at large, seems to be commonplace these days. 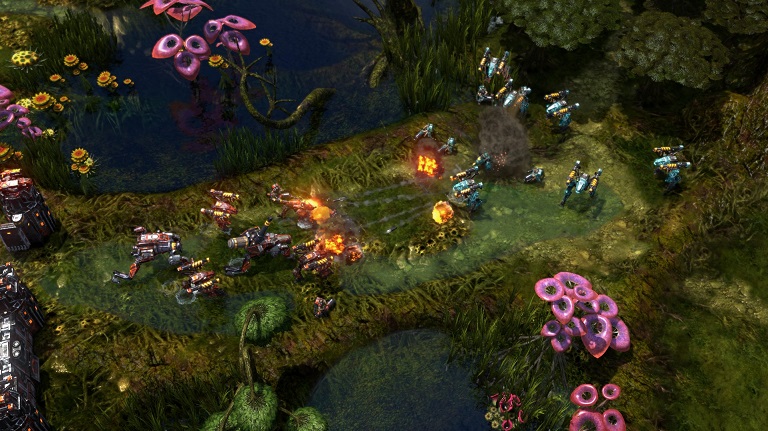 But when things ran smooth, boy does Goo look good in motion. Its graphical fidelity isn’t going to win any awards, but they are still solid all the same. The CG cutscenes, however, have been meticulously crafted and are, in a word, beautiful. It’s too bad, then, that the story didn’t feel more compelling. It had all the ingredients to feel like a true space opera, but it ended up coming off as generic at times, with a cast of characters that were difficult to root for or against. The heroes and villains were never fleshed out in a way that screamed brilliant. That being said, the tale wasn’t unbearable by any stretch of the imagination. I just think, given the opening cutscene, the game set the bar high from the get-go, and simply couldn’t reach it for most of its narrative. There are a few story crescendos that will wow, but on the whole, the storytelling needed to be tighter.

Multiplayer went off without a hitch, though. There are a series of modes with a respectable amount of maps (with more on the way, we’ve heard), so it will keep the competitive, and even-the cooperative, busy for a while. It doesn’t try to break any new ground, but instead does what’s now the benchmark effectively. A multiplayer experience that is seamless is more than many games can say (here’s looking at you, Master Chief Collection); so getting something that merely works is appreciated. This more than just works, though. There’s nothing like a human competitor; seeing all that Grey Goo has to offer is best ascertained through its head-to-head modes. 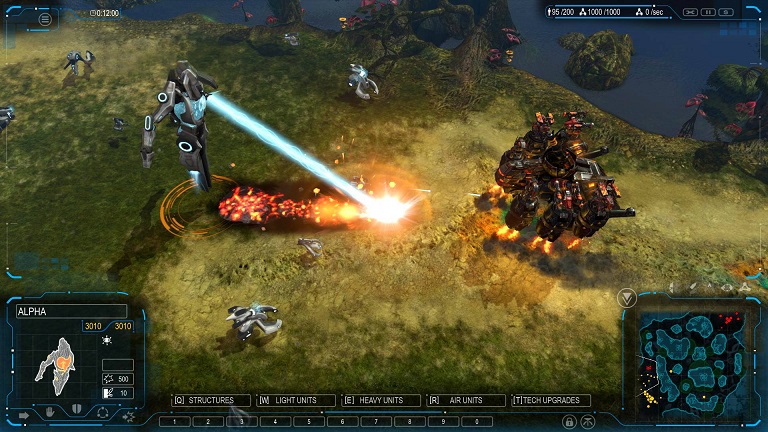 It’s a testament to sound design when the worst aspect of a video game is indeed its actual title. Even with it, though, Grey Goo is a stand-out RTS that has found an expert way of blending old with new to create something familiar but fresh. Fans of old-school real-time strategy classics such as Command & Conquer will find much to love here. Those who enjoy macromanagement over micro will also have much to sink their teeth into, as this endeavor resembles something more akin to End of Nations than, say, StarCraft. And yet, somehow Grey Goo pulls inspiration from all of those games and still manages to eek out a niche and identity of its own. It probably won’t catch fire and be as big as the genre’s titans, but it may get there as this first installment is a home run.