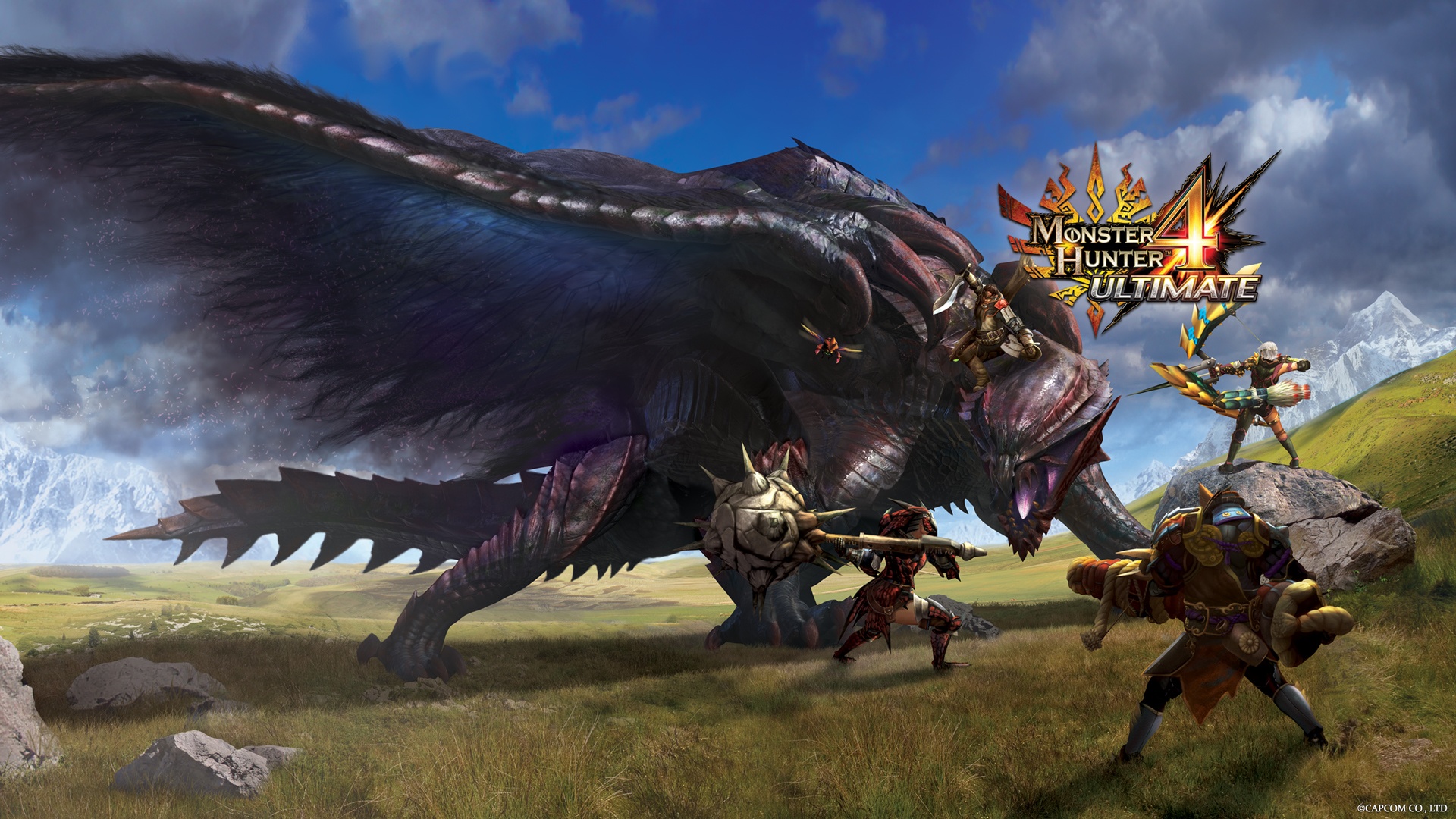 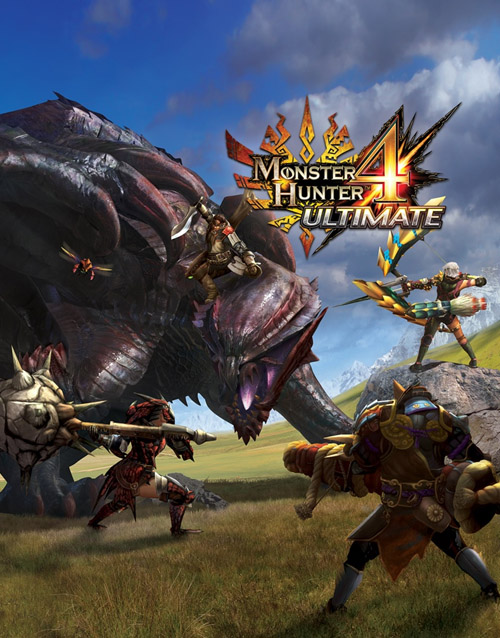 With Monster Hunter 4 Ultimate, Capcom sought to flesh out the skeleton of past games in the series by adding more villages, more monsters and more emphasis on story. The results are plain to see, and the sheer scope of the game can be almost overwhelming, especially for those new to the franchise. MH4U is also, however, extremely accommodating to newcomers, allowing players to enlist as a beginner and toggle tutorial messages throughout their journey. It’s still often a daunting experience, especially once you start facing off against the more deadly creatures in the world, but it’s nice to see Capcom taking steps to nurture new players while also catering to the old guard.

The key to enjoying Monster Hunter is, in my experience, finding a weapon that suits your own particular style of play. For me it was the insect glaive, a swift, moderately powerful staff that can also be used to pole-vault onto your enemies, and a new addition to the Monster Hunter armory. Players can also choose from stalwarts like the fast-slashing dual blades, the explosive gunlance, and the devastatingly powerful great sword, merely a few of the 14 diverse weapon available to players. There really is something for everyone here, and Capcom has clearly worked hard to provide options for players of all interests and proficiencies.

Unlike previous games in the series, MH4U features several unique hub villages, providing important changes of scenery while also accentuating the scale of the adventure. Progression from village to village hinges on the completion of certain story-based quests, but while its clear Capcom redoubled its efforts to provide a compelling plot for the solo campaign this time around, MH4U’s story ultimately feels like an afterthought and merely serves as a vehicle to explore more of the game’s vast, beautiful world. 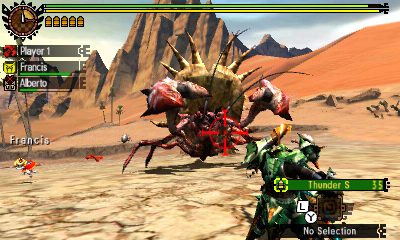 Despite the game’s forgettable plot, however, its chatty and well-written cast of characters really define its lighthearted, personable tone. I came to enjoy the company of the smithy, the cook, and the Guildmarm, and the localization team should be commended for their work in breathing real personality into each of the game’s NPCs. Your hunter’s animations are full of personality too, like jumping into bed after a long day of questing or clapping for the attention of your pet pig (that’s right, you have a pet pig), and along with the villagers’ ever-present wit MH4U is a lighthearted, colorful game.

The hunts themselves occur in vast, wonderfully rendered landscapes, and combined with the game’s stirring orchestral soundtrack those views incite a sense of real adventure. Of course, the world isn’t quite as beautiful up close as it is from a distance, and the 3DS shows its limitations with muddled textures and funneled exploration. Even so, it feels great to run through any of MH4U‘s varied environments, though the constant loading screens between sections really kill what would otherwise be an incredibly immersive handheld experience.

Most quests occur in one of several, pre-mapped environments, but after proving yourself a capable hunter the Guild will grant you access to Expeditions, unique quests that have you exploring a randomly generated map and gathering data on its inhabitants. Unlike normal quests, you can never be sure what kind of monsters will appear on Expeditions, but players looking for a heightened sense of mystery and challenge will love their random nature. 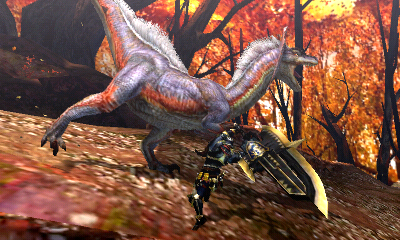 MH4U contains an enormous catalogue of creatures, the design of which are stunning more often than not. Enormous sloth-monkeys, a gigantic glacial shark and the obligatory dragons will be fought, each proving to be intense, challenging and supremely satisfying. Monster Hunter 4 Ultimate, like its predecessors, is deliberate in the flow of its combat, forcing players to strategize their assault on each towering creature and patiently wait for an opening to attack. Those who rush in haphazardly won’t last long; victory hinges on the ability to address the cues and patterns of a monster’s attacks, molding the assault to each situation. It may well present a frustrating learning curve for players accustomed to more fast-paced, frantic action, but Monster Hunter’s dedication to strategic battles means each encounter is significantly more challenging, memorable, and rewarding.

Of course, hunting is also slightly different this time around. In place of Monster Hunter 3′s underwater battles, players now have the ability to climb certain walls and ledges, and can also mount enemies by attacking them in the air. These changes add a degree of verticality sorely lacking from past games in the franchise, and provide hunters with another dimension from which to attack. They’re welcome additions to an already stellar combat system, but Capcom’s execution is far from flawless. Climbing is slow and rigid, and it can be tough with only one restrictive jumping animation to land an attack from your perch. Mounting a monster is slightly easier, but the cutscene transition from combat to rodeo momentarily detracts from an otherwise tense and immersive battle. 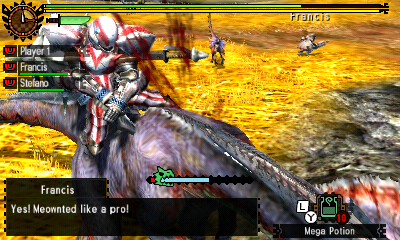 Felling a titanic beast is a fantastic feeling and Monster Hunter 4 Ultimate‘s battles only grow more and more epic as it progresses. Those hunts are what the game is all about, but those who don’t at least dabble in the incredibly deep upgrade system won’t get far. After conquering a monster, players can collect bones and hides from their prey to forge into more powerful weapons or more protective pieces of armor, each offering perks and boosts players can use to accentuate their strengths or cover their weaknesses. The prospect of collecting complete, gloriously designed armor sets from a certain monster is incredibly addictive, and it’s here that players will likely begin to lose themselves in the game’s almost endless customization.

MH4U is a fantastic single player experience, but it really comes into its own when you join forces with your fellow hunters. Whether locally or online, multiplayer in MH4U is silky smooth and fantastically fun, and appears to be a golden debut for the series’ first attempt at handheld online multiplayer. Whether with friends or with strangers, questing with other players is an entirely different beast to the isolation of the single-player campaign, and you may even find yourself building a power complex as you launch your cooperative onslaught. Monster Hunter 3‘s omission of online play was a missed opportunity, so its great to see Capcom finally embracing what is a natural evolution for the series. 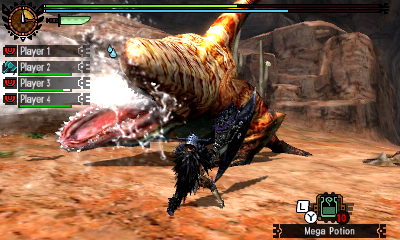 It would be easy to write off Monster Hunter 4 Ultimate as nothing more than an incremental update to an already fantastic franchise, but that would be wholly unfair to a game that makes a number of intelligent tweaks and additions to its historically solid foundation. Online multiplayer extends what is already a near endless single-player campaign, and many of the barriers to entry have been lowered (or removed) for players looking to hunt for the first time. Capcom’s execution isn’t always perfect, and the lack of quest variety may wear on some, but Monster Hunter 4 Ultimate is just about everything it strives to be: a sprawling adventure full of charm, customization and a whole lot of monsters.