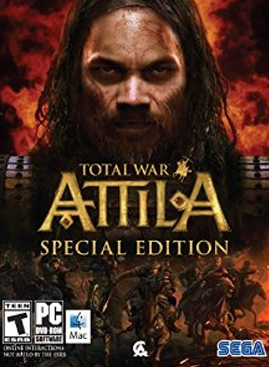 If Sid Meyer’s Civilization is overbearingly optimistic, then The Creative Assembly’s Total War series is its bleak counterpart. Where most grand strategy games have several factors that can determine victory – economic supremacy, scientific progress, or even cultural influence – Total War really has only one win condition, and it’s right there in the title. You might research new technology and forge political alliances, but you do it all in service of one goal: dominance through warfare. You need to conquer foreign lands either by waging war or intimidating them into surrender. If you don’t, someone else will do it to you, and you won’t have the resources to do anything about it.

Attila the Hun is really the perfect person to put at the center of this sort of game. He united the disparate Hun. The Huns’ story makes for a thrilling campaign, of course, but more importantly their actions irreversibly shifted the balance of power in Europe. The displaced peoples who fled from their attacks often fought those in their way, creating a domino chain of bloody skirmishes that threw the continent into chaos and tore the already weak Roman Empire to ribbons. Were it not for their invasion the Saxons and Franks might never have settled in Britain and Gaul, and the world we know today would be a very different place. Total War: ATTILA lets you steer the destiny of one of these nations in the face of the Hunnic onslaught – will you weather the storm and rebuild as the Romans, lead barbarian tribes to new lands, or lay waste to all before you as the Huns?

Often in 4X games, there isn’t much variety between factions. Series like Civilization often boil complex cultural differences down to a few buffs and a special unit. Factions in Total War games feel vastly different from one another, and this is especially true for ATTILA. Factions are grouped into five categories, each totally different from the others: Great Migrators, Barbarian Kingdoms, The Roman Empire, The Persian Empire, and The Nomadic Tribes. Barbarian Kingdoms start with a small base and aim to expand in a manner similar to your typical 4X faction, while the Eastern and Western Roman Empires start with vast territory but face imminent collapse due to political unrest. The Persian Sassanids have the easiest time of things, with a slightly smaller but considerably more stable empire, but even they quickly feel pressure from invading forces. The Great Migrators don’t have territory at all – instead their people travel with their armies – though they can eventually settle in conquered territory. The nomadic Huns travel in a similar manner, but they never settle; what cities they don’t raze to the ground offer them tribute to add to their war chest.

With such a wide variety of playstyles, Total War: ATTILA is highly replayable. Even within categories there are subtle differences that make each faction feel unique – for instance, Eastern Rome’s southern location and more stable political situation puts it in a better position than its Western Counterpart, which faces a barbarian onslaught more or less from turn one. Since multiplayer has never been the focus of Total War, the creative assembly are able to balance for historical accuracy rather than a level playing field. Some factions start out in completely unfair positions, which make it all the more satisfying when you manage to pull out a win. You’ll have to fight for it though. 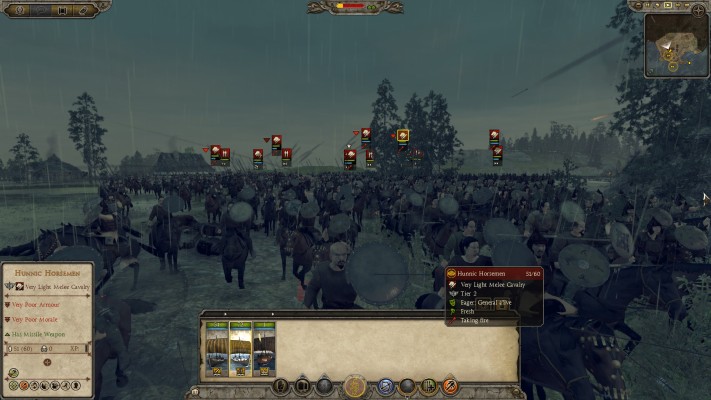 A big theme in Total War: ATTILA is the idea of threats from within. While you’re busy fending off barbarians and brokering deals with other leaders, you may find that your greatest enemy is the scheming bureaucrat who governs your capital city, or the second-born son who’s grown jealous of his brother. If you lose the loyalty of your most influential generals and statesmen they will incite rebellion, which can prove disastrous if you’re in the middle of a war. In order to mitigate these dangers you’ll need to spend time playing politics, securing the loyalty of your allies while discrediting your opponents. This leads to a lot of interesting decisions. You can promote leaders to higher office to placate them, but that will only cause their influence to grow, making them more of a threat should they choose to betray you. You have an array of political moves at your disposal, ranging from bribery to cold-blooded murder, and you’ll need to make clever use of them to maintain control of your nation. There’s more that can be done with this system – it would be neat if you could have two characters plot together and share their influence to overthrow someone more powerful – but it’s still a solid addition to Total War’s intricate simulation.

You’ll still have to deal with foreign powers as well, though, and here too you have a number of tools at your disposal. You can broker several different kinds of treaties, ranging from non-aggression pacts to trade agreements to full-on alliances, or even intimidate smaller countries into becoming your puppet states. You can’t make friends with everyone, though (as the Huns you can’t really make friends with anyone), and nations will swiftly begin to dislike you for making deals with their enemies. You need to choose carefully between appeasing and opposing larger powers, either earning their allegiance to combat bigger threats or rising up against them to take their resources for your own. Unfortunately, the menus for these diplomatic arrangements can be a bit unwieldy to navigate, which makes administrating your empire a bit of a pain. Fortunately, that’s not all you’ll be doing. 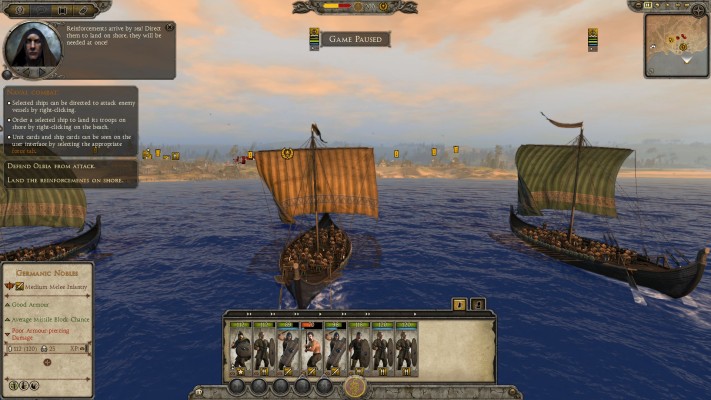 Eventually – inevitably, you will need to go to war. Battles begin long before you engage the enemy, starting as you position your armies around them in order to create and press advantages. You might hole up in your cities to await enemy hordes, or lay ambushes in the forests, waiting for them to attack. On the offensive you’ll try to cut them off from their allies, or encircle their settlements and construct siege weaponry for a more efficient assault. Every previous encounter in your campaign will shape your army, too – soldiers who’ve fought and survived many battles will fight much harder, though the ones who’ve narrowly escaped defeat will be nervous and quicker to flee when things get hairy.

Total War’s defining feature has always been its real-time battle simulation, which accounts for terrain, battle experience, unit formations, and even soldier morale. Once you’re in the thick of things you need to think like a proper commander, directing your troops effectively to ensure they don’t get flanked or end up facing down more effective enemies. It’s all fairly simple in terms of numbers, but in motion it doesn’t feel numbers-driven. You see enemy archers loose volleys of arrows at your troops, and you can zoom in to see individual arrows kill individual soldiers. In terms of statistics, Total War simulates just enough that you can employ nearly any strategy you imagine. You can hide your troops in dense foliage to take the enemy by surprise, slaughter their commander and frighten the rest of them into retreat, or even goad them into attacking you uphill. 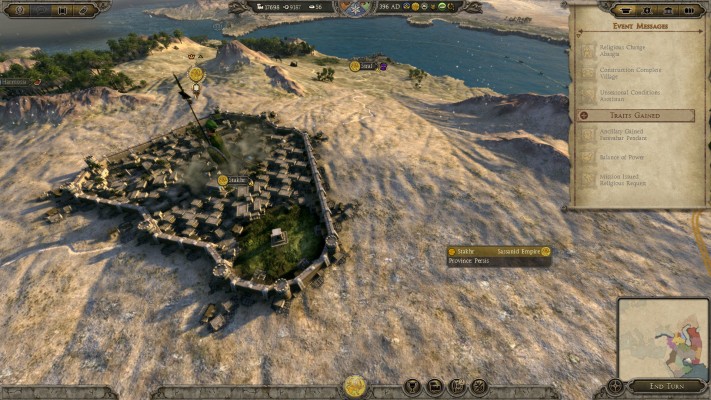 Or, you can light the whole battlefield on fire. New to ATTILA are dynamic fire physics that allow you to burn cover around your enemies, set the battlements of cities ablaze, and even raze their settlements to the ground. Fire can create temporary barricades, funneling enemy troops into choke points and scaring ambushers out of hiding. It can also tear down walls given time, opening the door for invading forces to sweep in and destroy. These fire mechanics could have been a cheap gimmick, but they open up a number of new strategic avenues, and they help to give ATTILA the apocalyptic atmosphere that its title character deserves.

If there’s one thing that The Creative Assembly excels at, it’s bringing their game worlds to life. Alien: Isolation’s chillingly believable Sevastopol station is the best example of that, but the Total War games have impressed on that front for a long time now. This might be a strategy game, but its battlefields can rival many open-world RPGs in terms of sheer detail. Fields are populated with widely varying foliage and unique geographical features, while cities are littered with the possessions of their citizens. Most buildings look as though you could walk inside them and explore, while ships and vehicles wouldn’t look out of place in a last-gen Assassin’s Creed game. Total War: ATTILA lets you get so close to the action that you can practically touch it, a far cry from the detached perspective of your average RTS. What’s more, this detail carries over to the dense and vast campaign map. 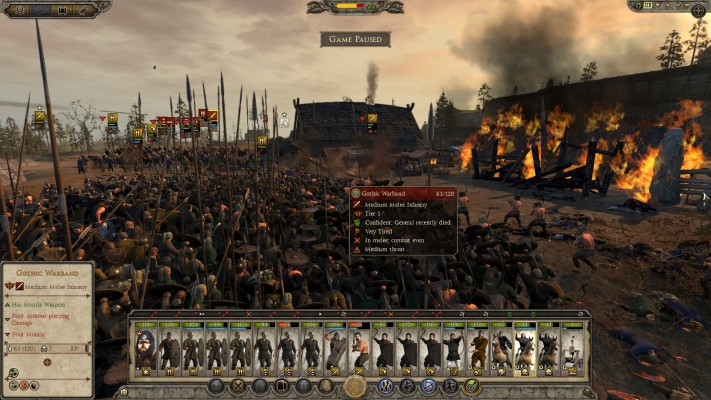 These intricate battlefields would still feel empty and hollow if not for the excellent sound design, though. You hear the ground rumble as your soldiers march across it, and the air rings with the clatter of steel as they engage the enemy. Units will cry out as the tide of battle changes, gloating as the enemy flees or screaming as they’re run through. And beneath all the shouting and fighting and burning, a stirring orchestral score that blends classical instruments with traditional Tuvan throat singing spurs you into action.

Perhaps the most remarkable thing is that none of this goes wrong. Many previous Total War games have been broken at launch, but Total War: ATTILA is – at least in my experience – entirely stable. The AI behaves intelligently enough to provide a decent challenge on and off the battlefield, and despite how much can be happening on-screen in a given moment, the game never crashes and rarely even stutters. There are occasional graphical glitches – at times birds will stretch out vertically to fill the entire screen, and the branches on trees look a little wonky up close with certain settings on – but nothing game-breaking. The Creative Assembly has clearly listened to their fans’ complaints, and I can  recommend ATTILA without reservation. 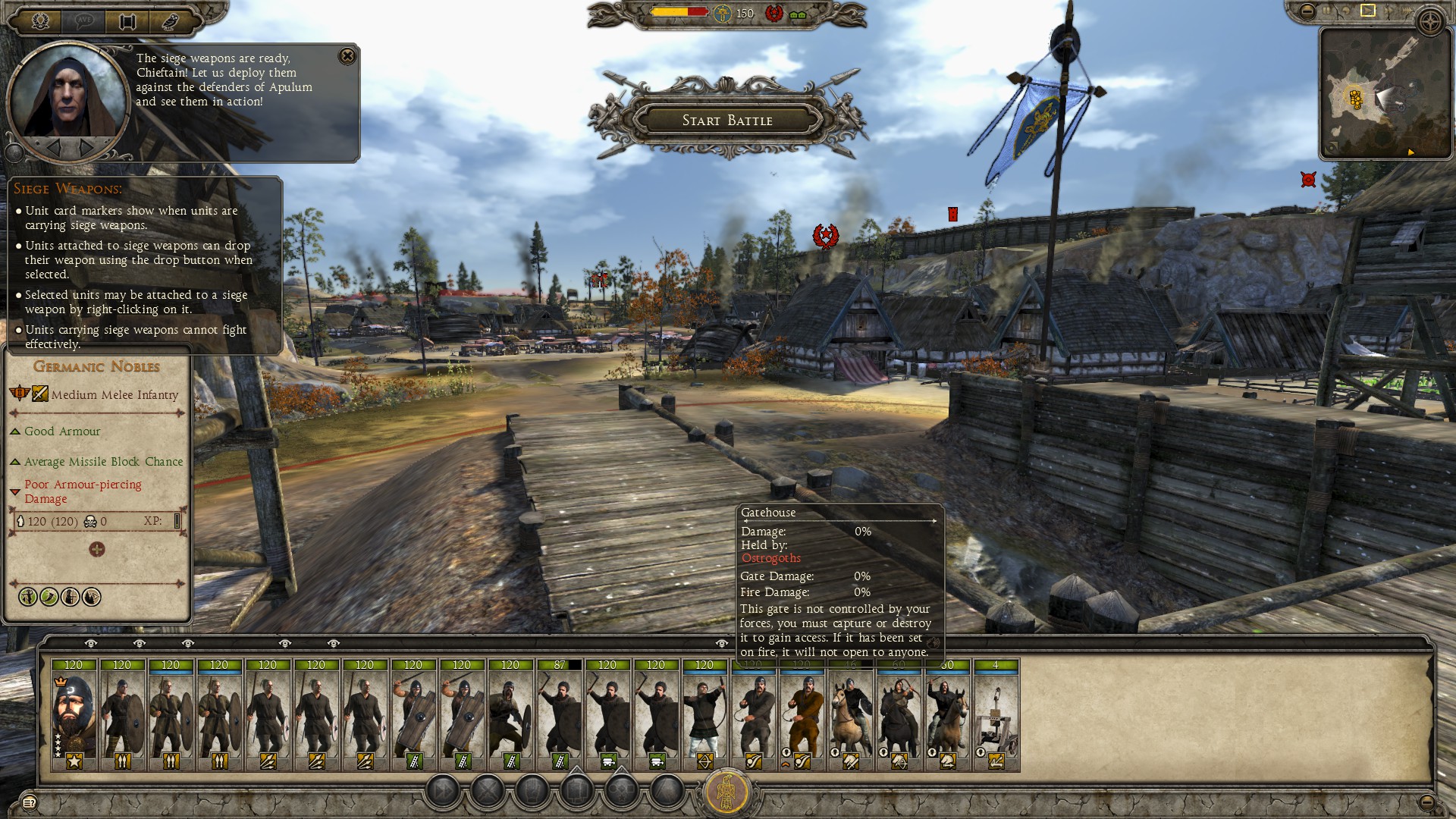 Like its predecessors, Total War ATTILA is equal parts grueling and rewarding, a deep simulation of medieval warfare that lets you shift the tide of one of history’s bloodiest conflicts. Unlike some of its predecessors, this game feels thoroughly polished, without any technical gaffes or design mistakes to speak of. That’s especially impressive given its scope, presenting immense and immaculately detailed battlefields filled with thousands of soldiers at once. There’s so much going on here that it can be overwhelming at times – a problem not helped by the cumbersome UI – but you’d be hard-pressed to find a more accurate depiction of what it’s like to wage war.