Nintendo has revealed the top-selling Amiibo figures for each region. Link, the Hero of Hyrule, managed to capture the top spot in three of the four regions, with Mario only managing to capture Australia.  CEO and president Satoru Iwata revealed the data during Nintendo’s financial results briefing.

Iwata confirmed that Nintendo has shipped 5.7 million Amiibo figures to date, and that the company is shocked with how well they’re doing. He’s even more shocked at how much less common Amiibo are selling on auction sites like eBay.

“We had already shipped 5.7 million units worldwide by the end of last year. Amiibo is performing especially well in the U.S., Canada and Australia. Some figures are sold out and are being sold at online auctions at premium prices – something which none of us had predicted.” 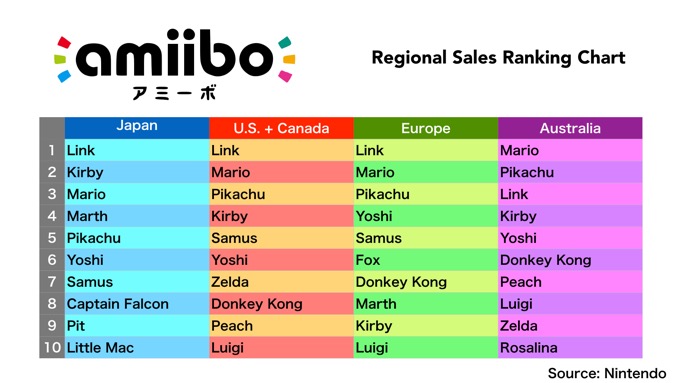 As for those rare figures that were shipped, and then quickly discontinued, Nintendo is considering creating more of them. Characters like Wii Fit Trainer, Ike, and Rosalina have become extremely hard to find, and fans have turned to auction sites to find them.

“It is difficult for us to promise to continuously ship all of the amiibo figures. We will, however, consider additional production in cases such as when an amiibo figure sells out shortly after launch, an amiibo is indispensable to play a certain game, and when we receive a lot of requests for an amiibo figure from consumers and retailers.”

Amiibo launched alongside Super Smash Bros. for Wii U last fall. Despite having limited functionality in games, the figurines have taken off at a staggering phase. Nintendo will launch Mario Party 10 themed Amiibo in March, alongside introducing more Super Smash Bros. Amiibo.