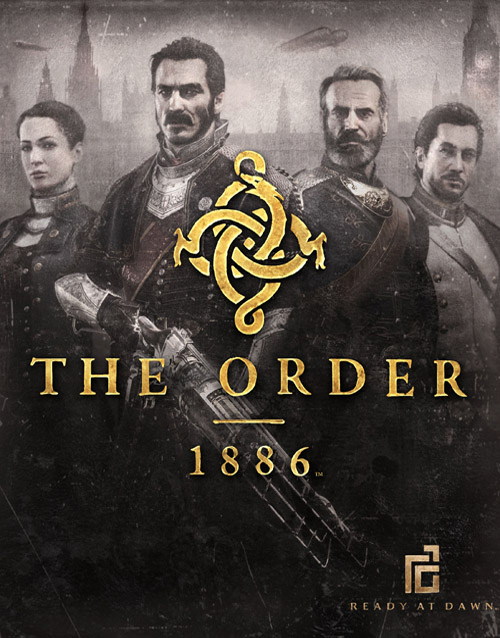 The Order: 1886 is arguably the most hyped game of the generation so far. Since its reveal nearly two years ago at E3 2013, it seems like the gaming world cannot stop talking about Sony’s biggest PS4 exclusive since the console’s launch. While there’s plenty of reason to be organically excited for the game, Sony has heavily contributed making it feel like an event. For the past six months, it’s been nearly impossible to go a day without discussing The Order, whether it be a new gameplay trailer, website launch or even a pre-game Super Bowl commercial. It’s clear Sony wants the game to be an event of Halo or Call of Duty proportions and it’s no surprise why: this is, again, Sony’s biggest PS4 exclusive since the console’s launch. With such a big gap since there was a reason to call the console home, The Order has its work cut out for it. Its generic, QTE-filled work.

The Order is set in an alternative 19th century timeline where lycans have emerged and challenged the dominance of humans. To wage war with these werewolves, King Arthur created The Knights of the Round Table — a secret society filled with some of the best and brightest calling themselves The Order — to combat this new menace. Things were successful for a time, but as mankind grew in numbers and technology, The Order soon found they were unable to protect all of society from the threat of lycans. As a wave of murders sweep through the streets of London, The Order is forced to investigate and soon realize the threat may be more greater than they even imagined.

The problem with the story is that for as much emphasis that is placed on it, it’s bog standard and needlessly convoluted. It’s a similar experience to falling asleep during the beginning of quite possibly the most convoluted lycan movie ever made, Underworld, only to wake up halfway through and have even a harder time figuring who’s who and what exactly is happening. And I’m actually a fan of Underworld, but there’s nothing about The Order’s story that is at all interesting. While it might end with a literal bang, in reality it’s a soft whimper of misguided design. Even if it was perfectly executed, however, it would still be a failure. Placing steampunk-esque technology on soldiers and having them fight lycans in an 18th century London is simply not as interesting of a plot as it seems to be on paper, inherently derivative of multiple other works in conception and even more so in execution. Full scenes and ideas are lifted out of other, better works like an incident where the protagonist is screaming “WHERE IS SHE?” as he slams a captive enemy against the ground, almost an exact mirror of the famous interrogation scene from The Dark Knight. 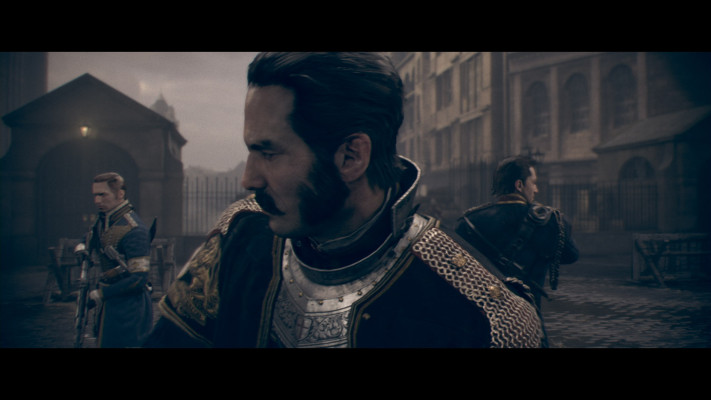 The failure of the story simply makes every other cinematic device jammed into The Order simultaneously malfunction. Presenting a game in a 2.39:1 aspect ratio has never been sensible. The point of widescreen is two-fold: to cater to the 2.35:1 aspect ratio screens installed at most theaters and to show more information at the sides of the frame, giving a decidedly more impactful experience. This makes sense for films that feature long shots of outdoor landscape or that want to focus on characters features whilst still giving a glimpse at the world around him. As such, widescreen has no purpose in a game not routinely taking advantage of it, which is hard unless the game features a lot of the above shots in cutscenes plus levels designed to utilize the added scope. While The Order accomplishes this a few times in cutscenes, only one scene seems to take noticeable advantage of this, which is the zeppelin. The rest of the experience just doesn’t fit in with the aspect ratio, and quite frankly as there is practically nobody who will play this on screen wider than 16:9 at home, it doesn’t make sense why they didn’t simply open up the framing and give the player more information on top and bottom.

Worse still is the inherent film grain added in post-production. Much like presenting a video game in widescreen, adding artificial grain also seems like a rather nonsensical decision. Film grain exist for a reason: it’s the by-product of shooting something on film stock rather than digitally. In a digital age where many films are now shot on ultra-HD cameras that produce a silkily smooth artificial-looking image, some filmakers have chosen to add grain in digitally (although recent innovations in digital photography are producing a more filmic image without the need), which is understandable in some cases, but it just seems silly in a game. The only time it would be acceptable is if it was being used to establish a period or if it was used in an exaggerated way to compliment something trying to ape a grindhouse film. The rampant cutscenes combined with the aspect ratio and grain are self-indulgent and make The Order seem pathetic for having to constantly shout out how cinematic it is, when games made over a decade ago have managed to feel truly cinematic without having to resort to these tricks. 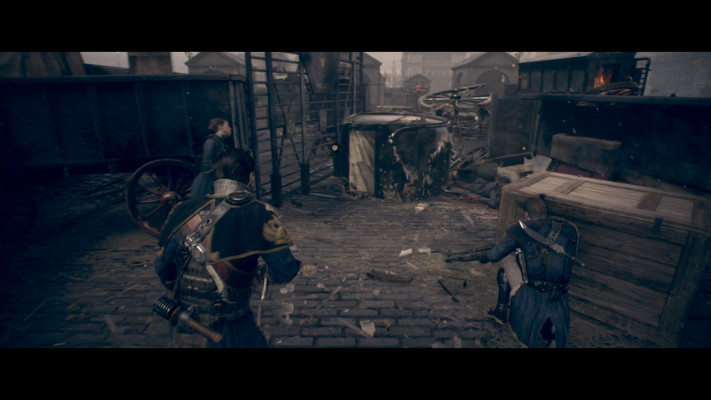 The artificial film grain also doesn’t do the visuals any favors. Some may proclaim The Order to be the best looking game ever produced, but that’d be a misguided opinion formed after falling into its trappings. From a technical standpoint, the character models and many of the environments are impeccably rendered. The cutscenes are seemingly rendered in-game and look incredibly realistic — and quite frankly, the character models and their facial expressions could indeed be the most technically advanced to ever appear in a game. But best-looking game of all time, The Order isn’t. The entire proceedings are basked in either a glum grey or persistent darkness. There’s not a single time where the sun peeks itself out or a beautiful backdrop is witnessed. While games like The Last of Us (even on PS3) frequently made player stop to simply take in the beauty of the scenery, The Order has no such moments, instead subjecting players to hours of dark, generically rendered corridors and tunnels. In fact, one scene is practically unplayable unless brightness and contrast is artificially boosted on your monitor. Our monitor is a professionally-calibrated VT60 and there’s not a single time I can recall we’ve had to boost contrast or brightness in a game since the days of CRTs until now.

The production values are, however, impeccable. The Order feels like a AAA title and it’s basically a seamless experience through and through. No glitches were encountered and it’s polished to the point that it’s lost most of its character. The sound design is one of the most major areas of note, with fantastic voice acting and a well-executed soundtrack. Bullets whiz around during gunfights and explosions sound booming. Combined with the technically proficient visuals, The Order is demo material for the early years of the PS4. 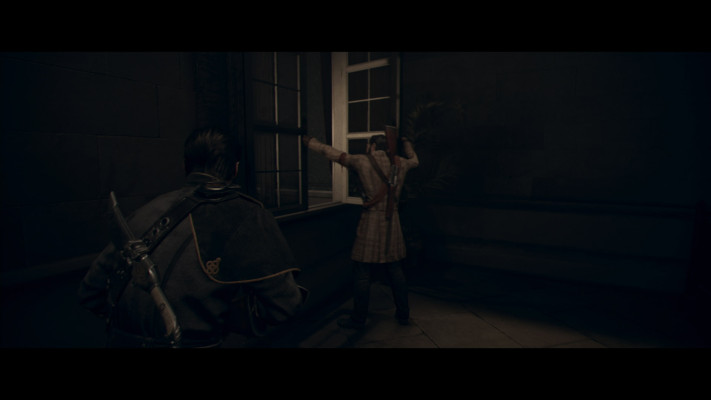 The fact that we’re a thousand words deep and gameplay hasn’t even reared its head is a sign of how little of an impact it makes. There’s been some alarming early impressions that have suggested the ratio of cutscenes to gameplay is 2:3 or that it comprises over half the playtime. Much of this have been heavy exaggerations, but the amount of cutscenes in The Order are staggering. Multiple chapters of the sixteen total are purely cutscenes — some shorter than five minutes — and there’s not a gameplay-heavy chapter that doesn’t have at least several throughout. Unfortunately, we didn’t time their total duration, but there’s at least an hour of them in total — possibly creeping near that two hour mark – which is a staggering amount considering this is a 6-7 hour game depending on skill and difficulty.

As likely all of my reviews would suggest, I’m not opposed to cutscenes. Story is one of the most important elements in a non-arcade game and my favorite series is far and away Metal Gear Solid, which is obviously the poster child for heavy cutscenes. In a world where many action games provide the absolutely minimum amount of story, it’s refreshing when developers attempt to spend time on them. 2013’s Remember Me, for example, was markedly improved by its poignant story that was well-balanced with gameplay. Even though The Order might possibly have doubled the percentage of cutscenes to gameplay as that game, however, it seems like hardly any story of weight is provided. After the credits roll, the distinct impression of one of those story-minimum action games is left, where enough background was provided to give the general impression of what’s happening, but not enough to connect to any motives or themes. The reason for this is three-fold: the story (as previously mentioned) is simply not all that interesting, the dialogue and characters have no soul and cutscenes have far too much wasted dialogue to arrive at points that could easily have been made in merely a few sentences of carefully sculpted dialogue. 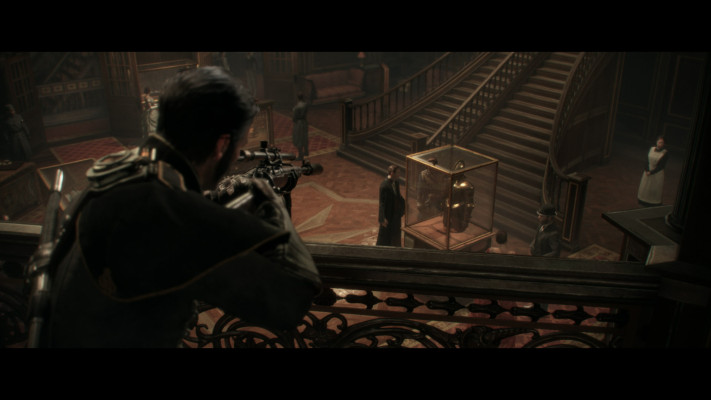 Oh, right, we were supposed to be going over the gameplay. In the middle of all of the pomp and circumstance is a fairly standard cover-based third-person shooter. This is the type of game that has come along by the truckload since Gears of War with little added to differentiate itself from the competition. There are a few rather novel Insomniac-esque guns such as the M86 Thermite Rifle, TS-23 Arc Induction Charge and the TS-17 ‘Detonator,’ which, although are the highlights of gunplay, honestly seem out of place in the traditional arsenal, and the rest of the game is not very steam punk or futuristic (with the exception of Nikola Tesla, who’s mere inclusion seems to serve as an excuse for the aforementioned high-tech weaponry) in design.

It seems obvious that Ready at Dawn realized that the main shooting mechanic simply wasn’t unique enough to carry the game for even its short running time, so entire segments of stealth mechanics are thrown in to make the experience seem more robust. These are not well-planned out, however, simply letting the player sneak up on enemies and pressing a button to execute the enemy with no other ways (including sneaking, realistically) to go about it.

Due to the lack of gameplay, it’s more odd that more branching paths and collectibles weren’t thrown in to help expand the experience. There are a couple dozen collectibles thrown in, but none are very interesting. Most are unrevealing photographs and audio files that can be played back. Annoyingly, the audio files will only play in the menu and are read out painfully slow, so many will likely gloss over them completely. Games that have audio files should always make them so they’re automatically played in-game and The Order’s reason for excluding this is likely due to the fact that there are so-many cutscenes that they wouldn’t have enough time to play, or more sinisterly, to help stretch out playtime. 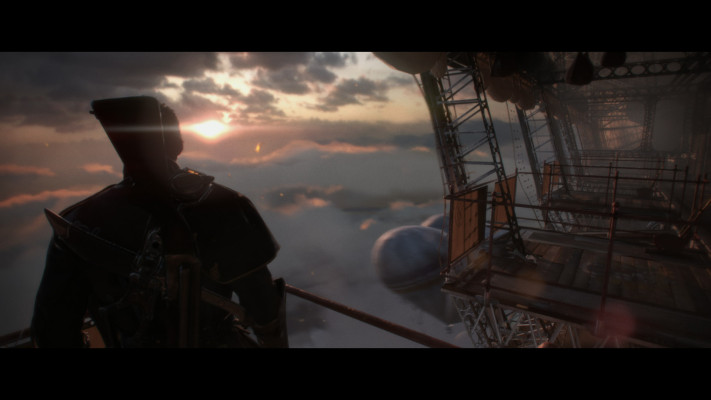 After almost two years of anticipation and endless hype, The Order: 1886 introduces itself with the bravado of a dead fish. With a premise interesting at surface level, enormous backing from Sony and technically incredible visuals, The Order seems like it would be a sure-fire hit. Tragically, however, it feels like a launch title fourteen months past its prime. This is a showcase for the graphical power of the PlayStation 4 and nothing more. Rudimentary gameplay, a poorly executed story and an unwelcoming visual palette make it come off as cold, uninspired and most importantly not all that fun. Perhaps Ready at Dawn bit off more than they could chew or Sony put more importance on the game than was really there, but this is not a killer app; it’s a demo disc for the PlayStation 4. Thankfully, the rest of Sony’s first-party slate for the remainder of 2015 looks killer, but The Order: 1886 is not a good way to kick off the year.