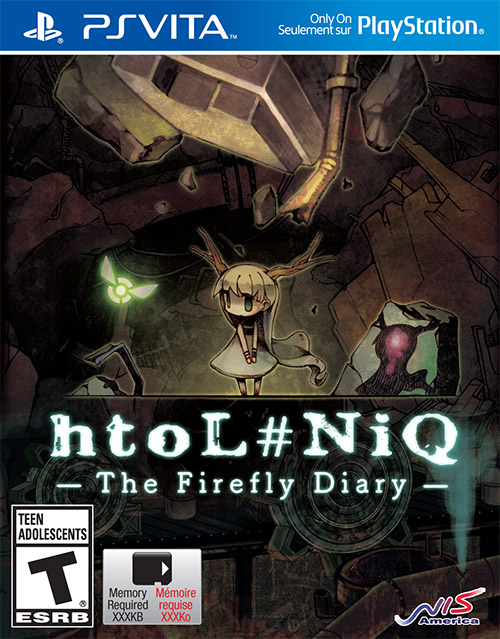 htoL#NiQ: The Firefly Diary is brought to us by NISA and at first glance seems to have all the ingredients for something amazing. There is this beautiful, distinct art style that immediately evokes a sort of fairy tale whimsy and the mechanic of swapping between light and dark worlds would seemingly lead to some really interesting and clever puzzles. The fundamentals for an incredible experience are there, and yet htoL#NiQ never seems to quite capitalize on them. It is still a fairly entertaining ride through to the end, but while it seems to mold itself like one of those stylized indie adventure games currently glutting your Steam library, it just doesn’t have the same heart and there is ultimately not enough substance to back up all the style.

The game opens with the adorable, large headed little girl Mion waking from a some sort of slumber. She is soon joined by two fireflies, one that guides her through the world of light and another that navigates obstacles in the shadows behind her. The game doesn’t even give you as much as a hint as to what is going on at first, kicking you out right into the action after a brief tutorial explaining how to play. From here fireflies must be used to solve some puzzles and direct Mion through various treacherous environments. It has the same sort of feel of numerous indie adventure games, and while htoL#NiQ is fairly coy about the story at first, you soon start piecing together something quite dark because it is essentially required that any stylized adventure game staring a child is going to take a right turn at creepy almost immediately.

The underlying premise behind it is meant to be played entirely through touch control. The light firefly is moved through touching the front screen, while tapping the back screen prompts the player to enter the shadow world and control the second firefly. Everything is controlled through the touch interface, and the game could be completed without touching a single button if desired. Climbing ladders, moving boxes, pulling levers and whatever else needs to be done is done through the touch screen. Playing this way, however, will result in an an unrelenting disaster, a rolling dumpster fire of bad ideas and poor design. 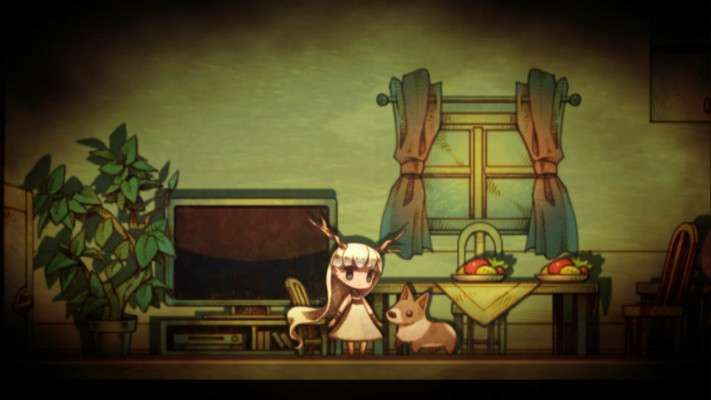 Trying to move Mion around becomes a complete mess, and at times it feels like the true enemy lurking in the darkness is the ridiculous controls. Controlling everything via the touchscreen quickly becomes a jumbled mess, and whoever thought move, grab, push, drag and climb could all be achieved by the same general set of controls must have recently been kicked in the head by a donkey because anyone not suffering from a traumatic brain injury would realize just how awkward this whole thing is almost immediately. In one boss fight, you are tasked with moving dynamite back and forth to damage the boss. Using the touch screen interface to try and move Mion backwards seems to have her let go and run fifty percent of the time, while the rest of the time she refuses to let go and drags the dynamite back with her so she can eat an explosion in the face like a particularly dumb version of Wile E. Coyote. Moving downwards is supposed to release the dynamite first, but the screen doesn’t always pick up what you’re trying to do and the sloppiness of the control scheme makes things significantly more difficult than it needs to be.

The absolute nadir of the entire experience came when at the end of Chapter 2 the game asks you to navigate your little firefly through a little maze. Touch the sides and you have to restart, and this relatively simple concept is ruined so completely by the controls that I came close to turning the game off and smashing my Vita with a hammer just so no poor unsuspecting soul ever found it and played it by accident. Not only is this inherently awkward to control, but the game seems to forget that most human fingers are “opaque” and not “see through” meaning that the precise little movements you need to navigate through the maze are blocked entirely by your hand.

It was here that I quit out of the game and went back to the options menu, deluding myself into thinking I must have somehow just missed the option to swap the controls into something less atrocious. And, miraculously, I had. If you are reading this review to try and find how any human found this experience remotely enjoyable: go to the options screen, tap on the dim right arrow to the side until you find controls, and switch to option “C”. You’re welcome. The game immediately becomes substantially more enjoyable when you move to a more traditional control scheme and almost immediately I found myself actually getting into the action. It does feel a bit like you’re undermining the game’s central premise and compromising its identity, however, as it seems built around touch controls. Still, I’ll take a slightly more generic experience over an uncontrollable mess any day of the week.

Using the d-pad does immensely improve the overall quality of the game, but it is still not perfect. You are never technically in control of Mion, and instead the firefly is used to guide her. This makes the controls feel somewhat awkward and more imprecise than they need to be. At times it feels more like you’re giving Mion vague suggestions than actually leading her through all the deadly obstacles. Mion also moves annoyingly slow, taking her time to slowly plod from place to place while you sit the firefly at the desired location and curse the fact she never learned how to run. 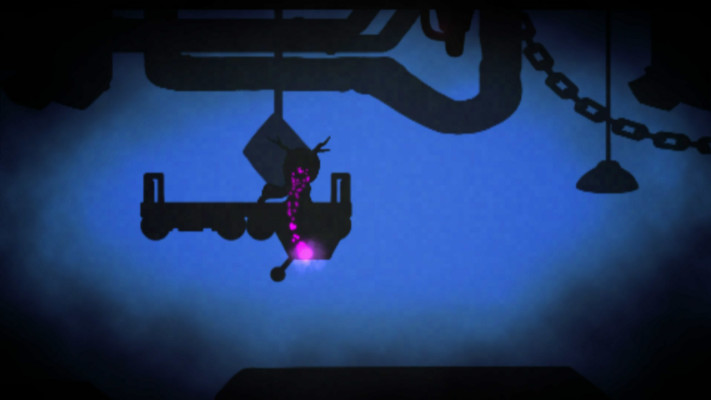 Still, even though control over Mion feels a bit looser than I would like, once the control scheme is switched the game never throws anything at you that seems unfair. You don’t have the ability for extremely tight and precise movement, but nothing calls for it and the challenges are well crafted to this more plodding, cerebral set of controls. You will need to float through deadly blades, trigger traps to kill enemies, and solve a variety of puzzles to get Mion to the end of each level. Each area tends to introduce some new trick so things never grow stale, and a nice job is done introducing some simple concept before eventually turning it into something interesting over the next couple of levels.

While the puzzles are solid and enjoyable enough to make the experience worthwhile, I still found myself hoping for something more. There is a bit of a wasted potential here, specifically in terms of the world shifting and use of the darkness firefly. At times, you need to use it to interact with some element that causes something to happen in the main environment, but it never gets more complex than one simple click to open a door or throw a switch. I was hoping for something more like the underrated DS classic Ghost Trick, where a series of interactive elements leads the way to some big clever puzzle, but htoL#NiQ has nothing like that in store. Once you wrangle down the controls into something usable, the challenge quickly dissipates and I found myself clearing most areas on my first try. It isn’t bad, and there is some fun to be had along the way, but things just get too simple and not enough time was dedicated into making the challenges actually challenging.

htoL#NiQ also has an interesting story to tell, but only if you’re willing to dig around and look for it. This isn’t like Limbo, the title this is most reminiscent of, where the gameplay and story were melded into one fluid, memorable experience. Instead players go around and solve puzzles, and memory fragments which tell the story piece by piece but only if you can find them all. It makes searching for all of them worth it and adds some much needed challenge in trying to get all of them, but the beautiful darkness and genuine sense of unease found in the story segments are generally missing from the actual game. 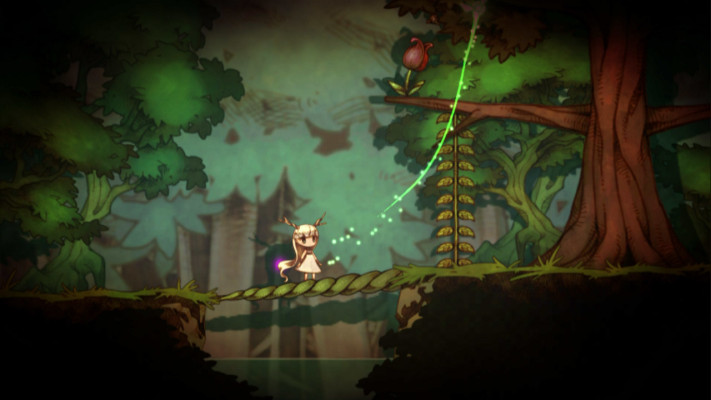 Ultimately, I feel like I ended up liking htoL#NiQ more than I probably should have. The controls feel a bit loose and plodding even if you switch away from the atrocious touch screen interface, the puzzles never reach the peak I was hoping for, and the world swapping mechanic is not utilized to its full ability. It is an enjoyable experience through its short run time, but it falls short of its potential and ultimately feels too safe. This is the kind of game you’ll enjoy while playing it, but will almost immediately forget about once you move on to something else. htoL#NiQ is good, which is a shame because it could’ve been much more than that.