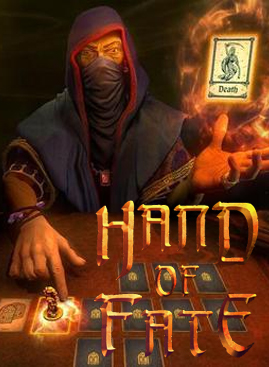 When I played Hand of Fate on Steam Early Access, I came away impressed. Here was a fun, polished, good-looking roguelike with a clever set-up and even cleverer execution. In a temple at the end of the world, you face off in a game of life and death against a mysterious, hooded figure known only as “The Dealer.” He holds your life in his hands in a very real sense, with events from your past turned into cards for his deck of encounters. The game plays like a mix of FTL and Arkham Asylum, with plot points conveyed through text and combat handled with simple rhythmic beat-em-up mechanics. This combination works remarkably well, creating a good balance between tense resource management and twitchy brawling. Put it on a PS4, though, and for some reason it barely works at all.

The sheer ineptitude on display in Hand of Fate’s PS4 release baffles me. Even in beta the game ran smoothly on PC, and I was playing it on a mismatched rig with an AMD CPU and Nvidia graphics card. Yet despite having only one hardware configuration to work with, Defiant has managed to completely bungle their port to PS4. In combat slowdown and frame skipping are frequent and occasionally deadly, leaving you to mash dodge and pray nobody ganks you while the screen catches up to the action. While managing your cards you’ll be subjected to constant, headache-inducing screen tears, and when the dealer plays them his voice will frequently stutter. It’s almost as though the developers just hit “export to PS4” in Unity and called it a day without testing.

It’s not like this is a particularly hardware-taxing game, either. It makes use of a painterly, Gothic art style (that, in keeping with the card theme, draws heavily on medieval tarot). Though this style is very appealing to look at, it doesn’t exactly require a high poly count or complex shaders. The only things in the game that look remotely processor-intensive are the motion blur and depth of field effects, but even then there’s barely anything here that would give a PS3 trouble, let alone a PS4. When it decides to run properly Hand of Fate looks really nice (the lighting is particularly gorgeous), and manages to evoke an atmosphere that is at once unnerving and oddly cozy.

The key to this atmosphere is The Dealer, your enigmatic antagonist and sole companion. As you play the game he comments on the pieces and on your decisions, addressing you with a detached malice. When the game begins his delivery is polite in a sort of perfunctory way, as though he’s bored at the prospect of trouncing another ill-equipped player. As you begin to best his creatures and prove your worth, however, he starts to become more menacing, clearly worried at the prospect of losing his little game. He’ll even taunt you if you take too long to make a move, or offer an insincere apology when your luck turns sour. It feels like you’re playing against a real person, rather than some soulless computer, which makes it all the more satisfying when you triumph against his challenges. 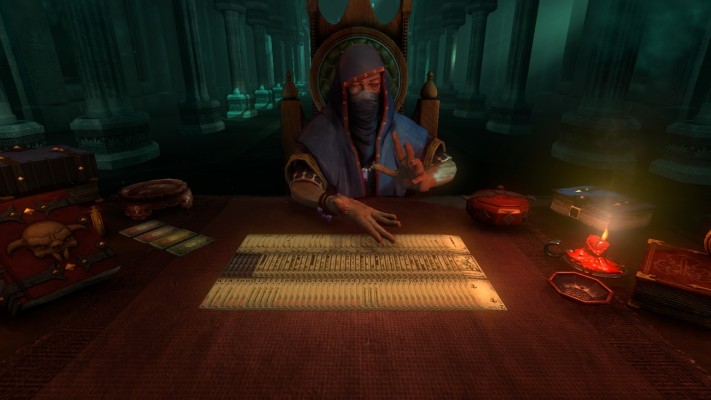 When you begin a new adventure you’ll be presented with field of face-down cards, one of which hides the entrance to the next area. All of the other cards contain story events, each with a short text description. Some will throw you onto a battlefield against a horde of randomly-assembled enemies, while others ask you to make tough choices and test your luck in order to overcome more unconventional obstacles. Occasionally you’ll find a shop where you can buy new items. Regardless of what you encounter, every step you take will consume your supplies, and when they run out you’ll start losing health, so you’ll need to think about buying food before you invest in kickass weapons and armor.

Hand of Fate differs from FTL in that here you have a much greater degree of control over what happens on your journey. Instead of dice rolls the game relies on a card shuffling system similar to Persona 3’s “Arcana Chance” mechanic, and it feels far more fair than pure RNG – even if it works the same in practice. Whenever you win an encounter for the first time you’ll earn a token that unlocks new cards, and you can use these cards to (quite literally) stack the deck in your favor for your next adventure. You can fill up your equipment deck with legendary artefacts and cover the board in favorable encounters, but enemies get tougher as you progress, and as you embark on new adventures The Dealer will seed your deck with new dangers. You may even put threats in your own way, loading up on unknown encounters in the hopes of earning new tokens. 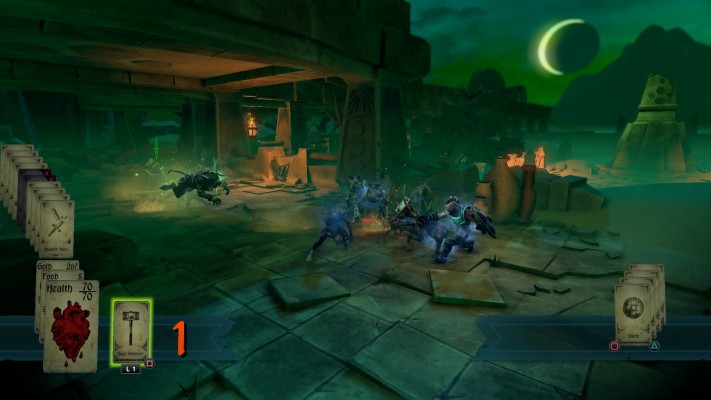 The dealer has four suits of monster cards at his disposal: dust, skulls, plague, and scales – representing bandits, skeletons, ratmen, and lizardmen respectively. Whenever you enter combat the dealer will draw a few monsters, with the numbers on the cards indicating how many of each type you’ll have to fight. The effect as the cards enter the battlefield and come to life is really something to behold, though it’s equally impressive seeing your warrior gear up as each of his equipment cards is stacked on top of him. There’s quite a wide array of battlefields with varying layouts and even traps to contend with. On occasion you’ll have to run through a maze of traps instead of fighting, although poor camera placement makes these segments more frustrating than fun.

Once combat begins it feels almost exactly like one of the Arkham games, and in this regard Hand of Fate is considerably better-polished than most of the Batman clones that seem to litter the market these days. Often these games threaten to be too easy – which is definitely not appealing in a roguelike – but thankfully Hand of Fate has enough in the way of different enemy types to keep you on your toes. You need to maintain a good rhythm and make strategic use of your counterattack and stun moves if you want to make it through each battle unscathed. The game still falls on the easy side of the roguelike spectrum, but combat is undeniably enjoyable – at least when the slowdown and freezing don’t threaten to get you killed. 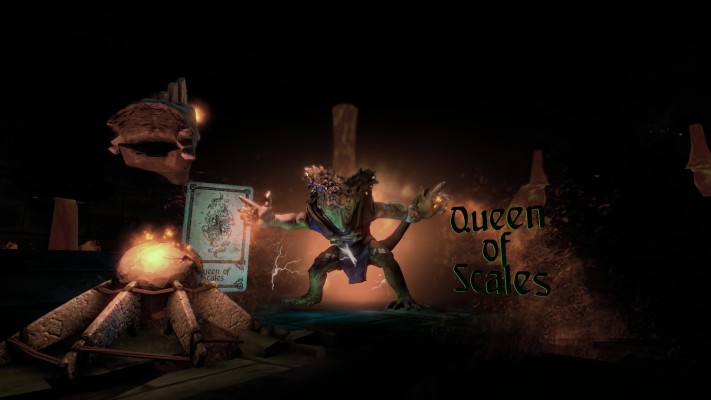 At the end of each adventure you’ll find a member of The Dealer’s “court” – face cards from each of the four suits. These aren’t just beefed-up versions of standard enemies though; each one has unique abilities and attack patterns that make defeating them a real challenge. They also inflict passive curses on you that affect your entire adventure forcing you to deal with dwindling supplies or unnaturally bad luck. Once you defeat a boss its card is permanently added to the dealer’s deck, and toward the late game you can find yourself ambushed on the road by several Kings, Queens, or Jacks at a time. On top of that, you’ll start running into Liches, Lava Golems, Minotaurs and Mages, and they can be just as tough to overcome as the bosses themselves.

Fortunately, you have equipment to even the odds a bit. Hand of Fate’s action combat system allows each enchanted sword and helmet you pick up to have a tangible benefit in combat, rather than just tweaking your stats. When you wield a flaming hammer you’ll actually light your foes ablaze with every strike, while using a frozen scimitar you can encase them in ice. Even with normal weapons, there’s a marked difference in the speed and impact of a mace compared to an axe. There’s also some really neat enchanted armour to be found, and many of the pieces can synergize with others in cool ways. For instance, combining the angel’s helm with gauntlets of speed lets you run circles around enemies like you’re The Flash, leaving a streak of light behind you as you go. These effects keep combat feeling fresh long after the game’s run its course. 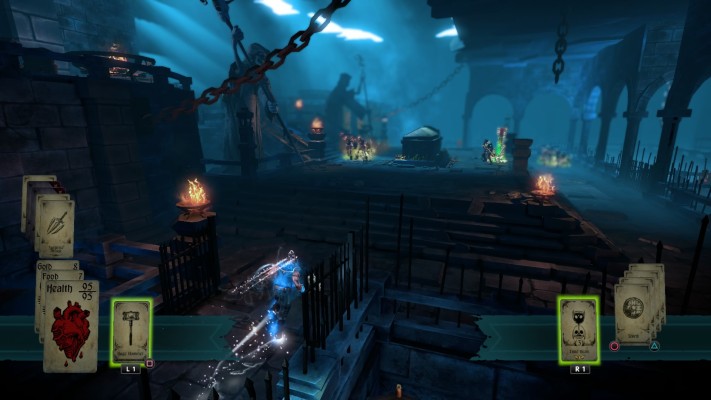 Hand of Fate isn’t perfect, but its various systems click together with rare elegance. Few antagonists are quite so compelling or vexing as The Dealer, and his theatrics help to sell the game’s odd conceit. If you’re looking for a fun and rewarding roguelike to play, I can’t recommend this game enough – at least on PC. Unfortunately, this version is inexplicably and inexcusably broken, prone to game-ruining bugs and frequent crashes. If all you have is a PS4, then I’m sad to say you should give Hand of Fate a pass.