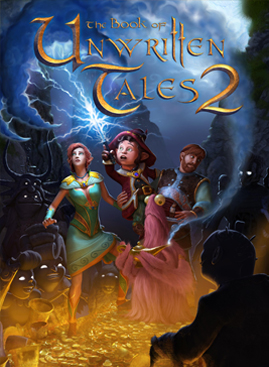 The Book of Unwritten Tales 2

While adventure games have seen a resurgence in North America, they’re not quite the same games they were two decades ago. Owing to the influence of Telltale and Quantic Dream, puzzles have largely been cast aside in favor of branching plot lines and quick-time events, and long-form adventures have been pared down to episodic seasons. This is not the case in Germany, where the most prominent point and click creators take a decidedly more old-school approach. There, the likes of Daedelic Entertainment put in hard time creating long, beautiful adventures with zany storylines and challenging puzzles. Out of all the classically-styled adventure games to emerge out of Germany in the last decade, The Book of Unwritten Tales and its spinoff Critter Chronicles are far and away the most polished, the best-written and the best designed. The Book of Unwritten Tales 2 blows them both of the water.

The first game introduced us to four fantastic protagonists: Wilbur Weathervane, a young gnome with dreams of grand adventure, Ivo, a headstrong elven princess with seemingly incurable wanderlust, and Captain Nate, who is Han Solo in every way, right down to his mute muppet sidekick Critter. A few years after their defeat of the dark witch Mortroga, things are not going well for our heroes. Ivo has been effectively imprisoned in the woodland realm by her mother and to make matters worse she’s inexplicably become pregnant. A bounty hunter has brought Nate and Critter before the Red Pirate, the slightly insane crime lord from whom Nate stole his ship. Worst of all Wilbur, having finally achieved his dream of becoming a mage, must now do the impossible – he must teach unruly children magic. As all this is going on, dark clouds begin to mass on the horizon. Dark in a metaphorical sense, that is – literally speaking they’re bright pink.

Like its predecessors, The Book of Unwritten Tales 2 is a loving sendup of the fantasy genre – in particular fantasy RPGs and Adventure games, although it takes broad aim at movies, novels, TV, and even real life as well. But this isn’t just a blind parody like Jazzpunk. The Book of Unwritten Tales 2 is funny – often uproariously, gut-bustingly funny – but its ultimate goal is to tell a good, meaningful story with relatable characters. Ivo, Wilbur, and Nate all follow clear character arcs over the course of their adventures, and Wilbur’s in particular is quite relatable (for reasons I won’t spoil here). At the beginning I wasn’t entirely certain the whole plot would work – Ivo’s romance with Nate sort of comes out of left field, for instance – but once all’s said and done it works, and works well. The humor is really just a tool in service of the plot.  In this sense, The Book of Unwritten Tales franchise has a lot in common with Terry Pratchett’s Discworld, which has been the subject of some pretty fantastic adventure games in its own right. 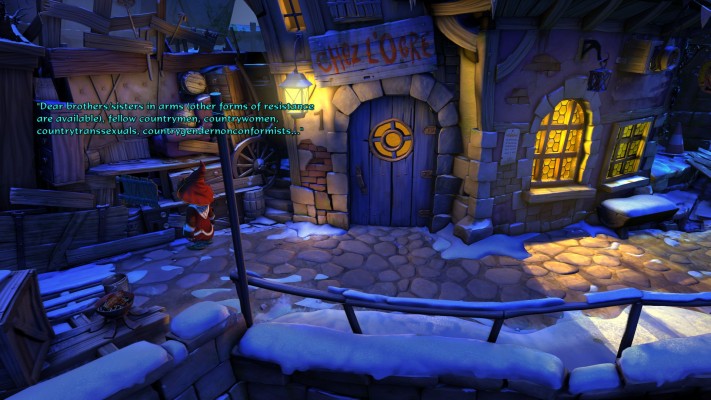 Another thing Unwritten Tales 2 has in common with the Discworld books is an undercurrent of sociopolitical satire. In between jokes about corporate-themed LARPing, ridiculous fetch quests, and Ents smoking their own leaves, the game takes some very pointed jabs at American politics. Much of Wilbur’s part in the story focuses on an election in the Alliance capital of Seastone, where the noble-minded Archmage is being trounced by the city council leader Van Buren and her shady smear campaign. Van Buren purposely undermines the Archmage’s policies in order to make him look bad, and pays an unscrupulous reporter (who happens to be an anthropomorphic fox) to act as her mouthpiece in the papers.  She gets the poor on her side by promising to protect their future riches from other poor people, and in lieu of an actual economic solution to wealth disparity, she concocts a lottery to placate the masses. The satire isn’t entirely partisan though – the pair of bumbling protestors who block off Seastone’s main street bear more than a passing resemblance to Occupy Wall Street with their crackpot conspiracy theories and their tendency to prioritize inclusive language over a coherent agenda.

Those who couldn’t care less about politics will still find plenty to laugh at here. In its 20 hour run time, Unwritten Tales 2 spoofs everything from Harry Potter and Back to the Future to Mario and Monty Python, and does so with a clear affection for its source material. If you’ve got a geeky bone in your body, this game will have you in stitches. But it doesn’t just rely on references for cheap laughs – it’s chock full-of hilarious, thoroughly original characters. From the nerdy, entitled oracle who treats the world like a TV show and sends pilgrims on snack runs, to the cynical vampire Vladi and his gold-digging fiancé, the game is never short on new and vibrant personalities. There are also quite a few recurring characters from the first game who now get a chance to interact with different heroes. I’m particularly fond of how the two-headed ogre half-brothers Blout and Zloff get on with Wilbur and Ivo, not to mention each other. They’re a superb comedic duo. 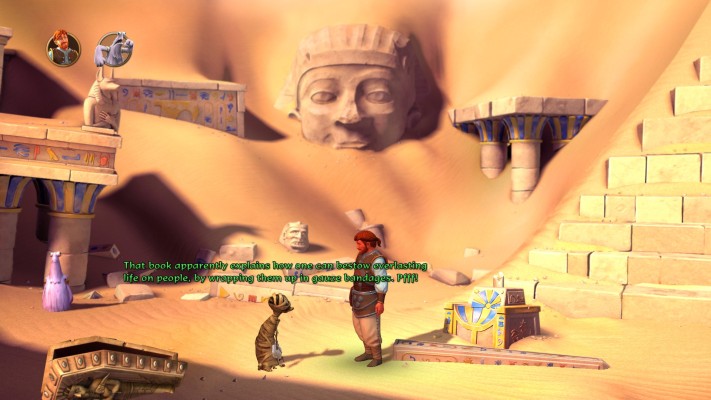 All of these characters are brought to life with superb writing, voice acting, and production values. All too often German adventure games fall prey to substandard localization, but KING Art made a smart choice in handing over translation and recording duties to OMUK London (the recording studio behind the previous Unwritten Tales games, as well as Broken Sword 5 and Randal’s Monday). Their translation efforts help the jokes hit home, and they’ve really gone the extra mile with casting, drawing on dozens of different regional accents to create the impression of a vast and diverse fantasy world. Given that the average fantasy game is populated by the residents of a single London suburb, that effort is much appreciated.

Of course, quality voice acting only goes so far – stiff animation can ruin even the best performances. In this respect, The Book of Unwritten Tales 2 is a bit of a mixed bag. In motion most of the characters seem to be lighter than they should be, and their facial rigs have a very limited range of expressions. With that said, they manage to convey a lot through their body language, and despite not quite obeying the laws of physics they fit into the environments seamlessly. They also go through loops of “stage business” when you’re not talking to them – stuff like fiddling with their clothes or picking their noses – which really helps to sell them as characters instead of background decorations. 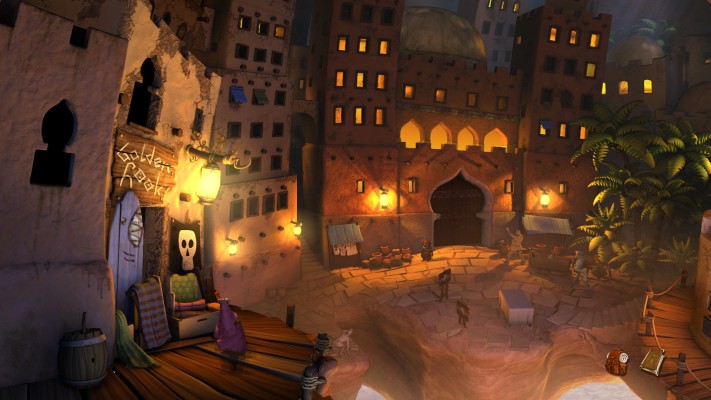 Speaking of background decorations, Unwritten Tales 2’s sets are its most impressive feature by far. Where its predecessors were constrained to pre-rendered backgrounds, this game uses a technique called “projection mapping” to project those pre-rendered images onto simple 3D models. Within a certain range of viewing angles these objects are indistinguishable from their high-poly counterparts, but the camera can move around them dynamically as though they’re being rendered in real time. You could easily mistake the results for a CG movie, but because the geometry is so simple and most of the lighting is pre-baked, it can run smoothly on a wide range of graphics hardware. These environments also load nigh-instantaneously, which is a drastic improvement over the original game’s interminable scene transitions.

For all its innovative graphical technology and sharp writing, The Book of Unwritten Tales 2 is, at its heart, a very traditional point and click adventure. You spend the game stuffing a collection of random knickknacks into your suitcase, then bring those trinkets out whenever an oddly-specific situation calls for them. This puzzle solving is a little less constrained and linear than your average adventure, though – at any given time you’ll have two or three objectives to complete spread across half a dozen or so screens, often with two or more characters. You can generally tackle these puzzles in any order, and even fulfill optional side quests in order to unlock new costumes for Wilbur, Nate, Critter, and Ivo. 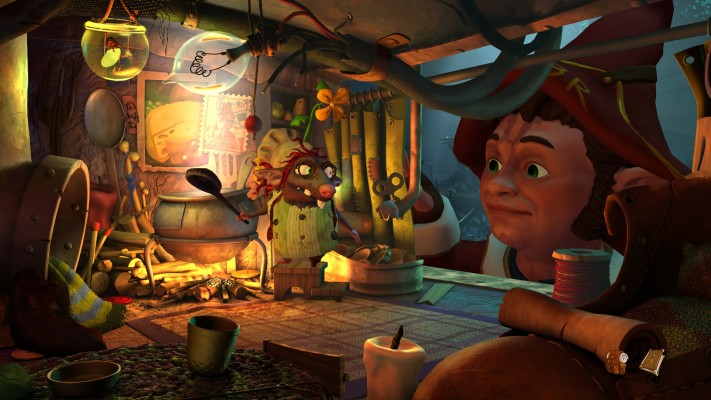 For the most part the inventory and dialogue puzzles are solid, offering up a decent challenge without being overly taxing, but some are a little more obtuse than they ought to be, requiring you to trigger a specific line of dialogue or search an object multiple times before you can proceed. This is a particular problem for segments starring Critter, whose inability to speak means he can’t make observations or give the player any clues. A hint system might have helped matters, but KING Art is too devoted to their old-school philosophy to permit such handholding. The game does, however, provide maps for fast-travelling around larger areas, and allows you to press space at any time to find all the clickable objects on each screen. You can also skip walking out of any scene by double-clicking on the exit – a feature that ought to be standard in every adventure game made from now on.

The Book of Unwritten Tales 2 does take a few stabs at less traditional puzzle design to mixed results. One of Wilbur’s side quests takes him back in time through the inherent magic of literature (a conceit borrowed straight from Discworld), and as he goes backwards the game slowly transitions from full 3D to 8-bit graphics to a classic text adventure. As puzzles go it’s nothing short of inspired. On the other hand, a segment toward the mid-game sees Wilbur and his friends shoveling coal into a steam engine, which turns out to be an excruciating exercise in trial and error. 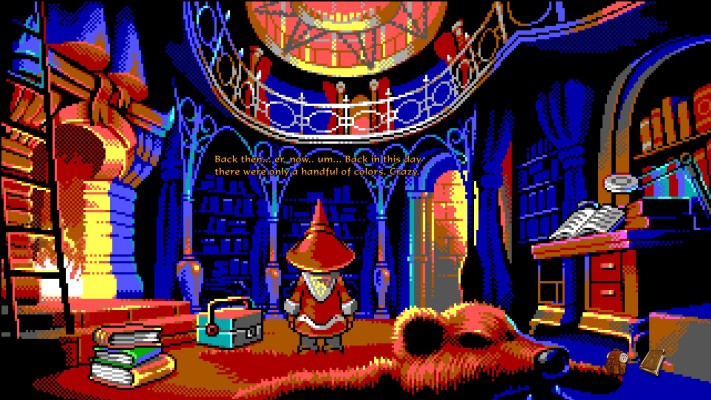 If you love point and click adventures, The Book of Unwritten Tales 2 is everything you could possibly want and more. With stunning (and clever) graphics, a fully orchestrated soundtrack and top-notch voice acting, its production values are second to none, and it has writing chops to match. The script is laden with hilarious references, but under all that it’s full of charming, memorable characters who can easily stand alongside the casts of Grim Fandango and Broken Sword. Hokey though it make sound, this game was clearly made with love, and it will make you laugh heartily.