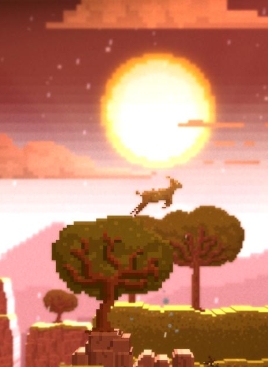 Thatgamecompany really made their bones on relaxing games, but very few companies other than them have tried to create something that melds entertaining into the mix. Luckily, The Deer God is finally out on PC and does just that. While it lacks the pedigree of something like Journey, it evokes the same sense of discovery that made the game great. The folks at Crescent Moon Games and Cinopt Studios have crafted a marvelous experience that works as both a relaxation tool and a game. The end result is a masterpiece that should be played by anyone looking for something that simultaneously challenges and relaxes them.

The Deer God’s premise is that you’re a hunter who is killed by a more powerful prey and resurrected by the deer god. Your life has been restored — but not as a human being. Instead, you’ve been turned into a baby deer so you can gain a sense of appreciation for the creatures you’ve slaughtered and what it’s like to lose your life in an unfair fight. This concept may seem a bit lean in theory, but it’s very open-ended in execution. There’s a moral compass at work here, so while the premise sets up that you’re out to right your wrongs, you can just opt to slaughter anything you encounter.

Of course, like life, there are either rewards or consequences to your action. Being friendly to all will result in having more allies against your foes. You can also mate with female deer and create a baby that follows you around. In each case, there’s a risk/reward built-in because, for each new creature you involve with your game, you up the risk for their own lives. This isn’t an enemy-laden game, but is one where you’ll encounter some tough foes and also face traps like gaps and fires. Some allies can avoid them, while others can’t and will perish as a result. It’s always tough to lose a companion since there is a bit of a bond built up with your allies.  While you can take out smaller creatures and hunters fairly easily, larger animals will take a lot of time to kill. The regular X-activated dash does a bit of damage, but is limited in use by a blue gauge — so you need to make sure to stand still and refill it. This can make you vulnerable, so you’ll want to retreat from battle for a bit to find safe haven before go back into battle. 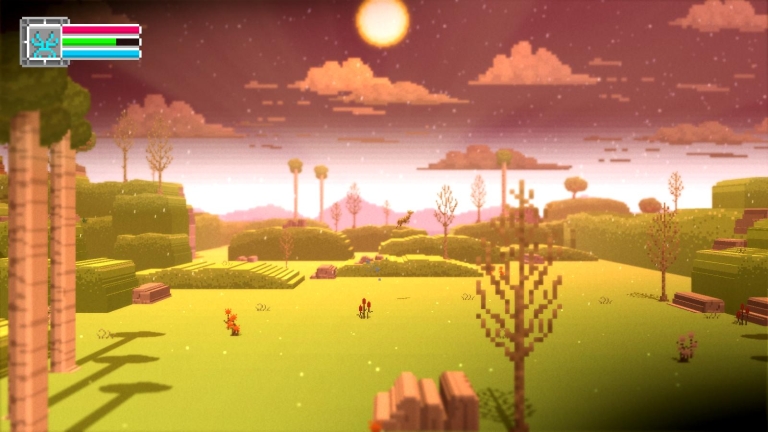 Healing items are plentiful and required since a steady food supply needs to be maintained to keep your strength up. Kills are rewarded with leveling up your deer, while death is fairly extreme. There’s a touch of a rogue-lite in this platformer thanks to perma-death being instituted if you bite it before a save point. This may seem like a drag, but the The Deer God‘s combination of being a runner and a world exploration game makes it work. Like a runner, you want to make as much progress as possible and like a Minecraft-style game, survival can be tricky if you aren’t properly-equipped. You can stay alive by finding lives, but your best bet is mating.

Lives allow you to keep your powers, but are hard to find. Finding a mate is fairly easy, and your offspring still acts as a checkpoint, but your power levels will be reset. In that sense, death is treated like it would be in a shoot-em-up where you can keep going, but have to rebuild your power bit by bit.  Another fairly major part of the game are the short-term fetch quests you can go on. Some will require taking risks while others just require finding items. Either way, you stand to gain new abilities that will aid you. Items generally give you a buff for your power, or in the case of mushrooms, let you reach higher places. There, you might find a new path with more enemies that provides a greater challenge, but also lets you level up faster, or quite possibly even a 1-up. 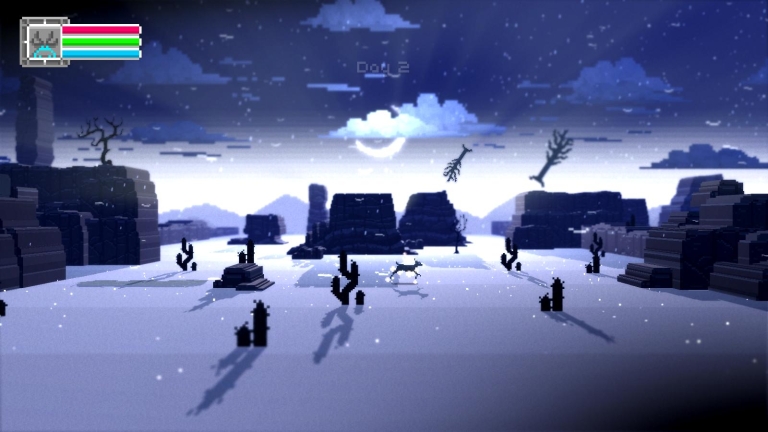 Exploration is something you’re eased into, and it helps you play the game properly. It’s tempting to want to rush through to the next area, but the game is best played at a deliberate pace. The old saying that you should stop and smell the roses applies here because rushing means you miss out on all of the The Deer God‘s ambiance, and there’s a lot of it. The game’s intensity doesn’t just come from combat, but from how the environments make you feel. Much of that has to do with the game’s blend of graphics and sounds to fill you with either fear or happiness.

After a fire-filled section full of peril, you might come to a relaxing forest. It will be highlighted, like everything else here, with the best voxel graphics seen to date. Resogun really made this style shine in a big way, but even it doesn’t come close to the beauty contained in The Deer God. Each area is set off with subtle lighting effects that change as the day and night cycle wears on. Extreme color saturation is another ally of The Deer God‘s design, as it alone can make you feel happy — like when you see a snow-covered area bathed by the sunlight, or make you a bit scared, like when you’ve got a dark blue sky and very little visibility. The environments are stunning and the character models are impressive as well. They’re animated with great fluidity when it comes to basic running and jumping, while attacks are sped up — this gives you a good mix of reality to be absorbed in and fantasy to be more effective in battle.

Beyond being the kind of game you want to savor, The Deer God is also the kind of game you’ll want to play with either earphones or a good headset plugged in. The ambient music and sound effects tell their own story and build up either a sense of relaxation or foreboding depending on the many circumstances. The stereo sound mixing in The Deer God is perfect. You’ll hear thunder roar in one ear while an animal growls or caws in the other. The combination of the sound effects alone paints a picture in your mind that the music adds substance to. 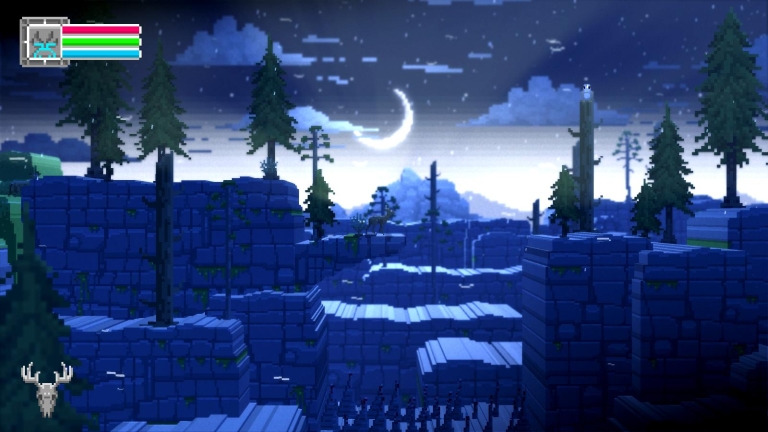 The Deer God takes a somewhat strange concept and turns it into one of the most enjoyably relaxing games on the market. It combines platforming skills with a touch of action and an unbelievable amount of atmosphere. This is a game that’s meant to be both played and savored, and anyone looking to try something that combines familiar gameplay elements with a very tranquil tone should give it a shot. It’s a stunning game to look at and perhaps even better to hear.