Konami has announced two new pieces of information that were absent from the unfortunate leak yesterday. Firstly, Metal Gear Solid V: The Phantom Pain will come with two special editions. The first is a Day 1 Edition for anyone who picks it up on release. This will net players a physical map of Metal Gear Solid V’s world, along with five DLC items: Adam-ska Special Handgun, Personal Silver Ballistic Shield, Wetland Cardboard Box, Blue Urban Snake Costume “Fatigues,” and a Metal Gear Online XP Boost.

There will also be a collector’s edition for $99 and will come with the a huge array of items:

That’s an incredible amount of content for under $100. In addition, Konami has announced that, while Metal Gear Solid V: The Phantom Pain will hit PS4, PS3, Xbox One and Xbox 360 on September 1, the PC version will come two weeks later. 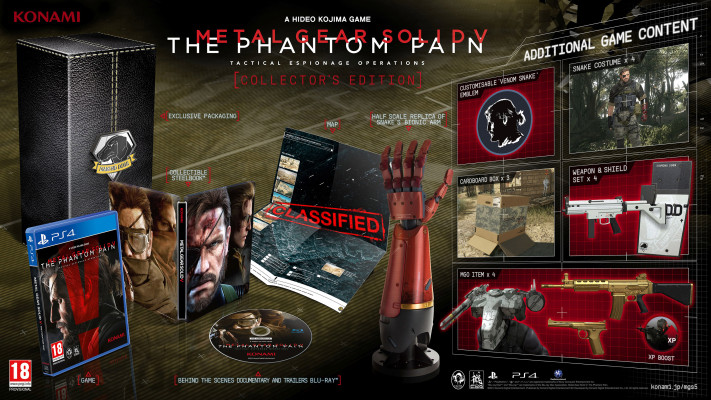