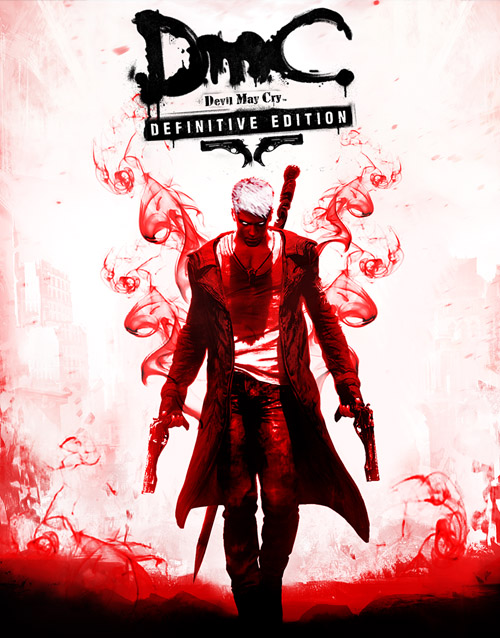 With over a year since the PlayStation 4 and Xbox One launched, we’re still lacking a game that defines this console generation. While the sales are through the roof, the game selection has seen an unfortunate number of broken releases and remasters. Capcom has thankfully decided to go down the road of the latter, re-releasing one of the best games in the last few years on the current generation platforms. It’s not just a copy and paste job, though, as Ninja Theory’s baby has received a number of modifications and rebalances that hopefully make it an even greater experience. The result moves DmC Devil May Cry one step forward and two steps back.

The gameplay mechanics remain mostly untouched as Dante retains his trusty Rebellion sword and Ebony & Ivory handguns. Along with the iconic set, Dante also collects two additional demon, angel and projectile weapons on his journey to find out who he is and stop the tyrannical Mundus. The controls makes it easy for anyone to pick up and play, switching between the angel and demon weapons on the fly. There’s nothing like bringing a group of enemies together with the Aquila and then performing a devastating ground pound to send them flying in all directions. The difference this time around is that there are two additional combat variations added to spice things up a bit: Hardcore Mode and Turbo Mode. Hardcore Mode brings back old school gameplay balances, giving enemies a stronger punch, making it more difficult to rack up the style meter and an altered Devil Trigger ability. Turbo mode on the other hand just makes combat 20% faster and is an absolute must for long running fans. While DmC already ran at an excellent pace, the extra boosts makes things much quicker and flows perfectly with how combat is structured.

If Hardcore Mode isn’t difficult enough for you, “Must Style Mode” will certain be up your alley. As an added bonus, this selection was made to test players by negating damage against enemies unless the style meter is at an S ranking. Considering Hardcore Mode drains the style meter much faster than regular, combing these two will give the most dedicated of fans a run for their money. In addition, a lock-on feature has been added to the R1 button, something that has been greatly desired by the community. This is a mixed bag because, while it ensures for greater accuracy with the camera, it’s not advised in hectic situations as it can be troublesome to switch between targets. On the flip side, the lock-on feature adds a stylish health bar when targeting a foe, giving you a better understanding just how much damage has been inflicted, and how much more is required. 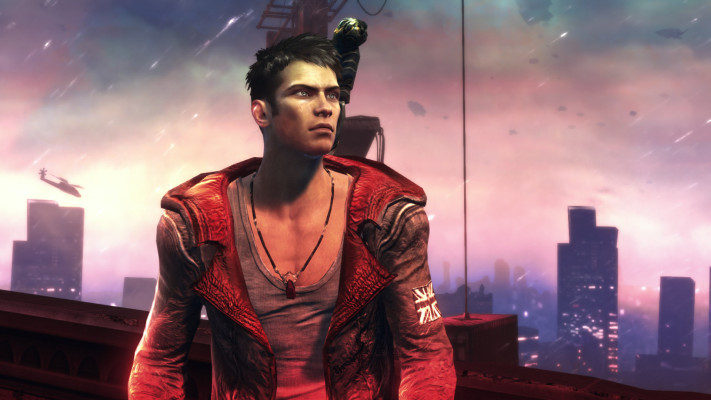 This wouldn’t be the “Definitive Edition” without packing in all of the downloadable content. This includes all of the skins for characters and weapons, along with the six mission campaign, Vergil’s Downfall. This tells the story after the events of the main game as Vergil is essentially dragged into hell and turned into a monster – hence the title. The plot isn’t all that compelling, especially with most of it being presented in a motion comic format, and seems to just want to bridge the gap between DmC and Devil May Cry 3. The combat on the other hand is a nice change of pace, especially in later missions when you get all the moves. Having played Dante for ten or so hours, it’s nice to see a new set of moves and techniques be applied to a similar formula. What has been added is a Blood Palace mode specifically designed for Vergil, including sixty levels of enemies to fight through. Considering how enjoyable the Nephilim’s combo structure can be, this is a solid addition that is arguably better than Vergil’s campaign itself.

While people thought DmC was being dumbed down for the mainstream when it hit back in 2013, the Definitive Edition could finally make an argument for that. The core gameplay remains the same, and the added Hardcore Mode does add an extra layer of challenge, but the collectibles are far easier to find this time around. Not only have placements been changed, but the entire secret key system has been simplified to an alarming state. Before, it was Bronze, Argent, Gold and Ivory keys to find, defining the level of challenge you will be put up against when unlocking their corresponding doors. All of these in Definitive Edition are now replaced simply with Gold Doors and Gold Keys, not defining the mission’s difficulty in anyway. One could argue that the system before had one too many key types, but having universal keys that unlocks any door diminishes the challenge and reason to replay specific missions.

Most of the keys and Lost Souls remain in the same locations, but there are tweaks to specific ones, with some even being taken out of a level all together and moved into another. The biggest two examples are in missions “Devil Inside” and “The Order,” where the player needs to utilize their combat skills against arguably the most challenging standard enemies in the campaign in order to collect these unlockable goodies. These ensured that the skillful players who knew what they were doing were able to reap the rewards, but not anymore. Instead, the key that was in Devil Inside is moved to an easier location and replaced with a purple star item, and the Lost Soul in The Order has been moved downward where a simple double jump will suffice. This isn’t a huge deal considering these won’t impact the story or game too heavily, but these changes help remove some of the extra challenge that made the original title enjoyable. 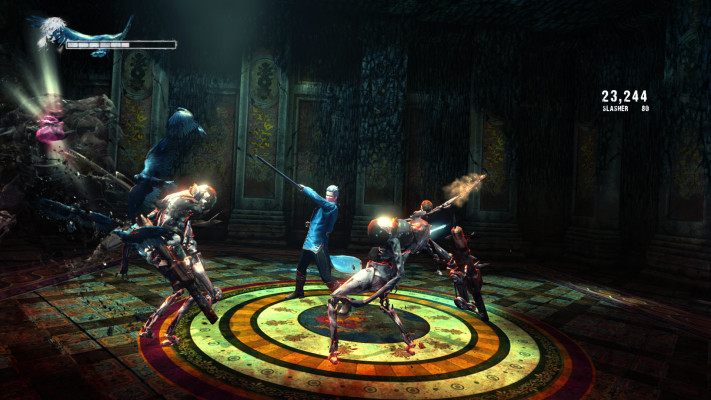 Looking past the changes to the collectibles, there’s only one significantly noticeable alteration to the main campaign: the final boss. To put it lightly, the final boss encounter has been butchered. It used to be an enjoyable sword fight with multiple layers as you progressed, but now it requires the same exact strategy until 20% of the boss’ health is depleted. Even then, that final “stage” has no strategy what-so-ever other than dodging more frequently. It was originally that you had to fight two enemies with one essentially acting as the other’s shield, allowing the antagonist to regain his health gradually. Now it’s just purely another enemy to fight with the final blow being a single, generic hit that doesn’t require you to be in the Devil Trigger mode. In exchange, the boss is a little more durable, taking less damage with every swing, but that doesn’t counter the number moves that were taken out and the simplification of this battle. What was an exciting clash of swords has been turned into a button masher.

It’s not limited to that one battle, either as the boss fight just before the final mission has also been drastically changed. For one, moving between the two platforms is no longer required as the spew attack has been removed completely. In addition, the charged up, mega man-esque blaster attack no longer tracks Dante down, requiring less precision to dodge and is almost a joke of an attack at this point. In its final stage, the original battle saw Dante dodging multiple fireballs in the sky, sometimes being difficult to track. This has been suppressed to be significantly easier as now there’s only one fireball that needs to be dodged before the boss comes close for you to unleash a devastating combo. These changes to the final couple of missions and boss battles are completely baffling as they weren’t all that difficult in the first place.

It’s clear that the “Definitive Edition” at the end of the title is purely there to indicate that this has all of the downloadable content packed in and a couple extra modes. This is by no means the definitive edition in terms of visuals, especially when comparing to PC – although this is a significant improvement over the PlayStation 3 and Xbox 360 versions. For one, the anisotropic filtering is severely lacking. Angling the camera anywhere other than between 45 and 90 degrees will show some unfortunate blurring of ground textures. It’s definitely not a deal breaker, especially considering how fast combat moves, but it becomes noticeable in specific situations. Dante has also received a new skin shader, and while in rare occasions it makes him look better, showing off a more vibrant skin tone, most of the time he has an unusual glossy shine to his face. Thankfully, DmC Definitive Edition looks rather sharp at 1080p resolution, and the frame rate runs smoothly. 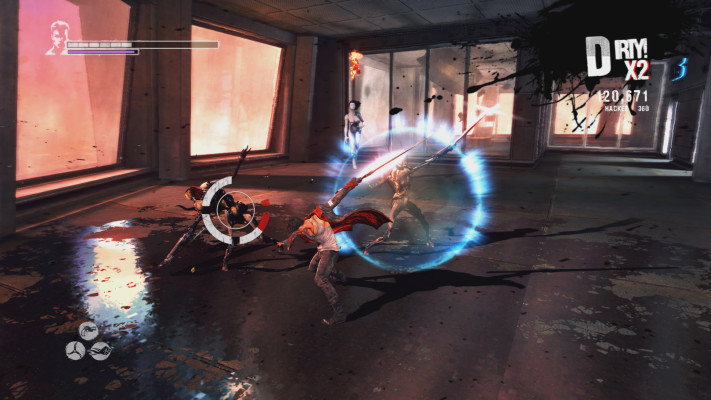 Most of what made DmC Devil May Cry so enjoyable has been altered; some of it for the better, some for the worse. While the fluid and highly enjoyable combat remain intact, the restructuring of collectibles and scenarios such as the final boss tarnish the experience. That’s not to mention that the Definitive Edition doesn’t hold a candle to the two year old PC version from a visual standpoint as there’s a lack of anisotropic filtering and a shinier gloss to Dante’s skin. With that said, the Turbo Mode is a welcome addition, speeding up the combat just enough to make a difference, and the Hardcore Mode offers an old school rebalancing structure to the core mechanics. While DmC Devil May Cry is still a top-notch experience that’s highly recommended for newcomers and existing fans, calling this the “Definitive Edition” is a stretch.