We Are Doomed is already a slick-looking game with its solid colors and hypnotic geometries, but the chance to dive back in and update things was a welcome opportunity for its sole developer, Mobeen Fikree.  While I was very pleased with the original version, there were (apparently) things that could be touched up and tweaked.  We Are Doomed graduated from a single spot in the Indie MiniBooth to a full section of the MegaBooth this year, and both PS4 and Xbox One versions of the game had its new upgrades on display.

The core game is basically the same, with a geometric little sprite in a large arena clearing out the massive swarms of enemies with its giant flamethrower/laser in classic twin-stick style.  The primary mode’s levels are tuned identically to the current PC version, but there’s also a new Endless mode that spawns enemies in an infinite cascade of popcorn enemies, ramping up in difficulty far more quickly than the main campaign as the horde zones you in and forces you to manage the space around you rather than worrying about screen-clearing. 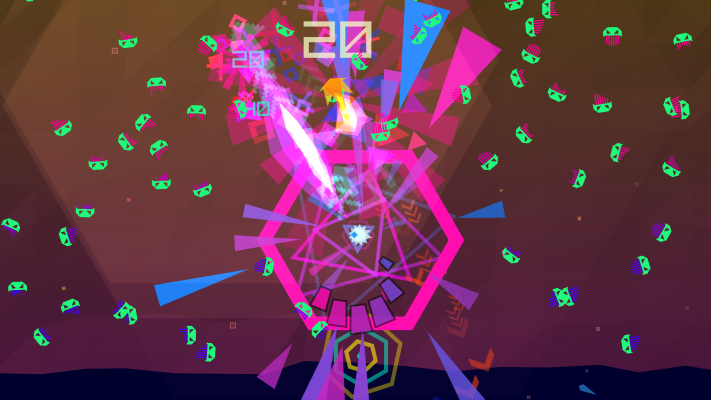 Most of the rest of the tweaks are graphic redesigns.  The player ship-critter is a more ordered spiky mass, with its center iris moving more noticeably in a way that makes it feel livelier.  The indestructible asteroids have a sense of design to them, rather than the slightly chaotic mass they were before, and the vortex that spawns the troublesome waves of little red triangles has a nice fake-3D effect to it.  Even the purple squares and cubes you pick up to power the superbeam and increase the score multiplier got a visual tweak with a little glowy line around them.

The cubes also got a core gameplay tweak, in that now they power up the multiplier faster the higher it gets so that a single hit isn’t an effectively-instant game-over on a score run.  All these lovely upgrades will also hit the PC version after the console versions come out, and maybe if Valve pays attention it will even hit Steam some day.