A Destiny player called “The HM05” just beat Crota — the game’s hardest boss that typically requires a skilled team communicating a focused strategy often involving coordinated rocket attacks, supers, and swords — by himself, and with no guns. After the climactic moment, he lets out a series of exhilarated screams before he can put actual words together again.

“Take that, you stupid trolls!” he yells, triumphant. “That’s what you get! Said I couldn’t do it. Said it was impossible. Well, all of you [he begins to make an obscene gesture, but refrains] are dumb. And I’m awesome.”

It’s a pretty incredible achievement in Destiny, but it’s also not the only time something like this has happened. Just scroll through a handful of the related videos on the side of the YouTube page and you’ll see a variety of masochistic goals players have set out to achieve, some of which involve teams of players, but most involve one player setting out on the highest difficulty setting, or with the worst gun in the game, or a specific weapon, or no weapons, or with a self-imposed time limit, or whatever other interesting combination of restrictions they can come up with.

It’s easy to imagine that to be Bungie at a time like this is complicated. You’ve designed a challenging, complex boss fight that was supposed to require teamwork, coordination, and dedication to beat, and now some guy just beat it by himself without even using a gun. The temptation has to be there to patch all of it to prevent players from circumventing everything the company spent hundreds of thousands of combined man hours conceptualizing, designing, and testing, over and over again.

All I can say to Bungie is this: please don’t.

I don’t even play Destiny, but I find all the variation in player strategy and self-imposed restrictions endlessly fascinating. It’s not unlike what you get out of hardcore Dark Souls players who challenge themselves to beat the game at soul level 1 with no armor and no deaths, or Super Metroid speedrunners who end up breaking the progression of the game by acquiring power-ups in an order the game didn’t intend. It’s all fantastic to watch, to see how people finesse or brute force their way through an established challenge. It breathes new life into a game.

But too often today, developers are patching out player variation, strategy, sequence breaking, anything that could potentially unlevel the playing field or otherwise disrupt the balance of a carefully crafted game. More and more, games are imposing rules to force players all down the same path and smooth out every possible rough edge. It’s led to games that are more balanced, polished, and boring than ever.

Let me tell you about Medal of Honor: Allied Assault. 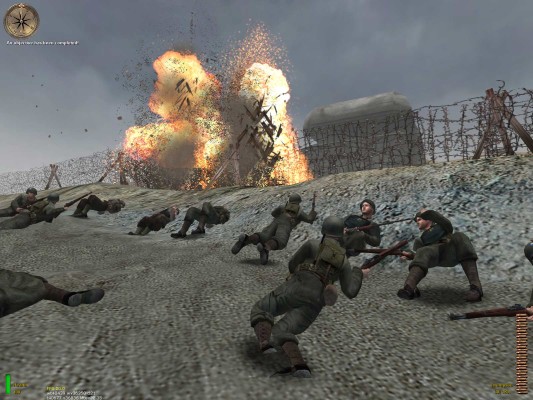 Allied Assault came out in 2002, and I’ve played more of it and its Spearhead expansion than any other game before or since. I joined clans, participated in the faux-military ranking and promotions, had clan matches. I arranged pistol duels at dawn, rocket launchers at sunset, melee bash fights at “The Bridge.” I experienced how profound the switch from dial-up Internet to a cable modem was through Allied Assault. I spent every free moment playing it, becoming an expert with all weapons on all levels in all objectives. I could write essays on the difference between the American M1 Garand rifle and the Russian Mosin-Nagant 1891, and why the latter was a better choice overall despite not being semi-automatic like the former. I was so obsessed with the game that I actually wrote guides on how to be an effective sniper and strategies for specific maps.

But more than anything, I spent my time trying to break the game.

We spent entire matches just figuring out how to get onto supposedly inaccessible roofs, into hidden areas, or outside the map entirely. Every map had a way if you were dedicated enough. Developer 2015, Inc. usually had complex minefields to discourage access to the edges of the map, but again, if you were dedicated enough, you’d find a very deliberate path involving counting your steps, turning at the right moment, and jumping over specific mines, until finally, you dropped down below the map and out of sight. Then you’d teach others the route through.

It was a surreal feeling to reach the edge of the world and plummet into a grey void, landing on solid ground and staring up at your friends like a ghost. We felt like explorers reaching uncharted lands. Just check out this guy, giving away all our trade secrets in a beautiful montage of cheesy transitions and terrible music.

That feeling has been all but completely stamped out of games today. In a game like Battlefield 4, if you get outside the boundaries of the area the developer has sanctioned you to be in, you’re given a short grace period of about 10 seconds or so to get back in otherwise you’re simply killed off and respawned in-bounds. It’s especially frustrating when you weren’t even trying to break anything; you were simply playing the game as intended and ended up outside the bounds with no way of getting back in time, like ejecting from a helicopter before the player piloting it crashes into the ground. In a case like that, you’re being punished for no good reason at all — just a developer’s obsessive need to control your experience.

Of course, if it’s too easy to break the game, it will negatively affect the player experience anyway as too many players exploit the same glitches to cheat in a match. We deemed the act of getting under a map and killing players that way in a normal match was worthy of a warning, then a kick, then a ban if a player continued to antagonize. But innocuous acts, like getting on a roof to snipe, were considered fair game; after all, you put yourself at risk by making yourself visible as you clamber up a specific path and snipe from plain sight.

It was a balancing act, for sure, figuring out what was OK and what was not, but it was left for us to decide, and I respect that much more than a developer who stamps out creativity and deviance in all forms in favor of a controlled experience.

And so we return to Destiny. 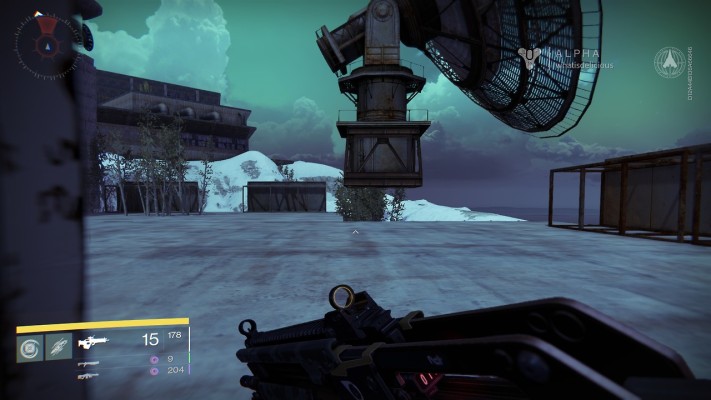 When I played the Destiny First Look Alpha early last year, one of the first things I did was figure out how to jump up to a roof Bungie clearly didn’t intend for me to see. It’s not hard to see why: it’s unfinished. The satellite isn’t even attached to the roof. It’s barren. The roof texture is plain and looks stretched. But you know what? I felt more accomplished getting to that crummy roof than doing anything else in Destiny. In fact, the majority of my time with the alpha was spent cracking myself up figuring out ways to break it.

The average player isn’t going to beat Crota’s End by him or herself without guns — there’s a reason why we can single out the one recorded player who has done it — or with a specific weapon only, or whatever. The average player will have the exact kind of demanding, strategic match Bungie intends for players to have. But for the fringe players, the ones absolutely obsessed with the game who play it nightly, who wake up thinking about it, dreaming up new strategies and challenges to overcome, it’s worth letting them break the game a little.

And for all the other developers out there trying to patch holes in your maps or figure out other ways to lock your game down all in the name of “balance” and “player experience,” maybe consider letting a couple of those holes slip through. I’m sure every developer out there can tell you their favorite glitches, bugs, map holes, or other weird, fun tricks in the games they played growing up. Give players something to hunt for, to collaborate on, to whisper about on forums and show off to their friends.