Castle Crashers and Diablo are some of the best co-op franchises of all time. Though they play differently, both franchises have brought friends together across many different platforms. It’s a wonder why no one has had the idea of meshing both franchises together. Enter Super Dungeon Bros., a game that manages to do just that and feel entirely fresh. We were able to meet with React Games to play a rowdy match of some good co-op fun in Super Dungeon Bros.

In Super Dungeon Bros., up to four players take control of a group of hard-rocking warrior bros. and traverse the procedurally-generated dungeons of Rokheim. Along the way you’ll encounter the undead, demons, booby traps and puzzles. It’ll all be worth it once you get your hands on that sweet loot, though. 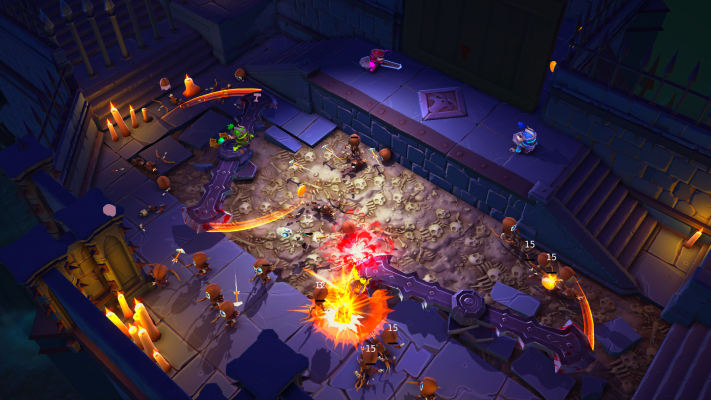 Once all together, players will then select their character and weapon. Only Blue, Green, Red and Yellow were available during the demo, but the team assured that there will be many more characters to unlock. There are also a wide range of weapons to craft and collect. Swords, crossbows and maces are among the twenty weapons.

From here we were dropped into a dungeon area, one of three unique worlds in the game. Here we got our first taste of gameplay as we fought back a few undead skeletons. It’s easy to mash the attack button, but true bros. work together to defeat the enemy. Bros. can pick up and throw each other, and combine special powers to deal massive damage. There were puzzles in the game that required bros. to work together, and the reward was valuable loot. The levels may be procedurally generated and scaled based on how many players there are, but it’s hard to imagine Super Dungeon Bros. being all that enjoyable for someone playing solo.

The level ended with a boss fight. In typical boss fight faction, we had to stagger the enemy and then attack its weak point. It wasn’t too hard, but the enemy design in this game is neat. The team is drawing inspiration from Dungeons and Dragons when designing the enemies, and it’s looking good. At the end of the fight we found a large treasure room and took it all. 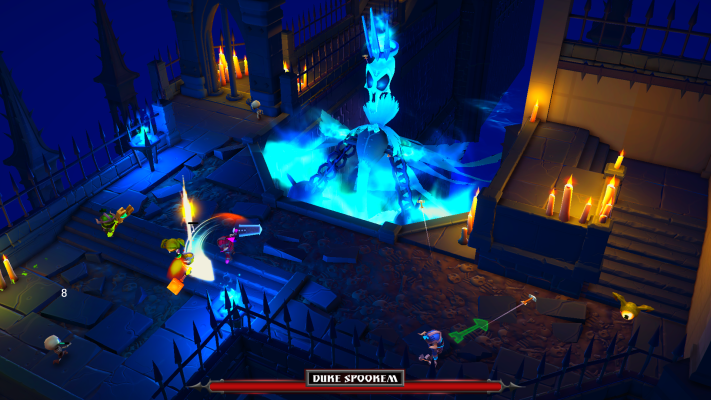 After the demo, we had a chance to talk with the team about the game. Though the only platforms announced are PS4, Xbox One, PC (Windows 10 and Steam) and Mac, React want to reach as many players as possible. Though they aren’t ready to announce anything, PS Vita and Wii U ports could potentially happen in the future.

React are developing a game aimed to keep players engaged for months after release. An extensive suite of daily and weekly challenges will be added to the game for players to complete. The best of the best will be displayed on regional and global leaderboards.

There’s also an extensive DLC plan in place. New characters, weapons, mounts, and worlds will launch for Super Dungeon Bros. in the months after launch. How much they will cost, and if any of them will be free, remains to be seen. 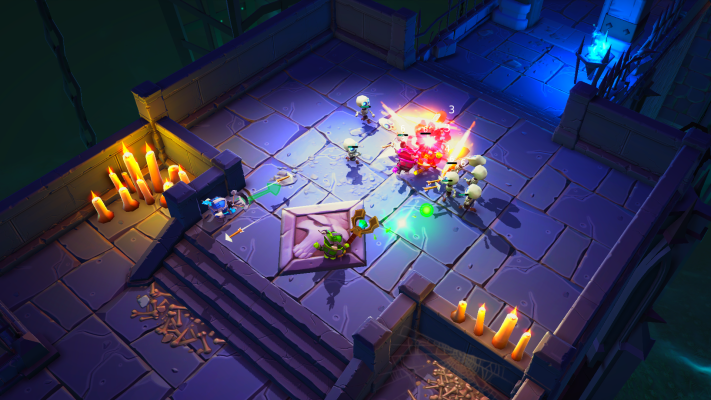 Super Dungeon Bros. is shaping up to be a fun co-op dungeon brawler. Games like this don’t really come around all that often, so this could be an exciting game to own. Still, I’m concerned about how much someone playing solo will get out of the game. An even bigger concern is the game’s extensive DLC plans. It’s hard not to feel that when a company has extensive DLC plans that content was cut from the base game.

There is still plenty of time between now and launch for React to give us solid details. Super Dungeon Bros. is targeting a fall 2015 launch on all platforms.