It’s kind of odd that there isn’t already a game like Necropolis. Dark Souls rewards careful, methodical play and punishes recklessness brutally, and that philosophy aligns perfectly with the core conceit of roguelikes. But while permadeath and random levels seem to go hand in hand with dodge rolls and carefully-timed sword swings, actually creating a game like this is a daunting task. Souls games need to allow players to see threats coming in order to feel fair, and without memory to rely on, good telegraphing becomes even more vital. Designing a procedural level system that always alerts the player to what’s ahead through environmental cues is challenging enough, but building a precise, well-tuned combat system to work within it is even harder.

Harebrained Schemes is more than up to that task, at least if the demo I saw for Necropolis is any indication. With a simple, polygonal art style reminiscent of Journey, they paint a darkly humorous world where death lies around every corner and heroic ambition is a liability. You play a nameless adventurer – one of many – who delves into a vast underground ruin known as the Necropolis, the crypt, fortress, and laboratory of the archmage Abraxis. Countless glory seekers have tried and failed to conquer the ever-shifting labyrinth. Their life force feeds the magic fortress, and their bodies are converted into automatons that protect it.

Fighting those automatons and the other monstrosities that prowl the Necropolis is tricky and satisfying. Combat feels very similar to the souls games, testing not just your reflexes and situational awareness, but your planning as well. You’ll attack with a combination of fast but ineffectual light attacks and slow, powerful heavy attacks, throwing in occasional shield bashes to stagger your foes. Enemies are vicious, relentless and fast and you’ll need to get a feel for the exact length of each weapon and the time it takes to make a swing in order to triumph over them.

Fortunately, there are alternative solutions to many encounters. The dungeon is a living ecosystem, and most enemies have a predator/prey relationship with other creatures. Crystal soldiers or gem eaters might be problems on their own, but if you can lure them together they’ll take care of each other for you. A big part of the game’s learning curve involves discovering these relationships, but that’s not the only way you can use the dungeon to your advantage. At certain points you can take control of the Necropolis’ mechanisms, shifting entire rooms around in order to give yourself advantages and create new paths forward. Those who enjoy the more thoughtful, exploratory aspects of the Souls games will find a lot to enjoy here. 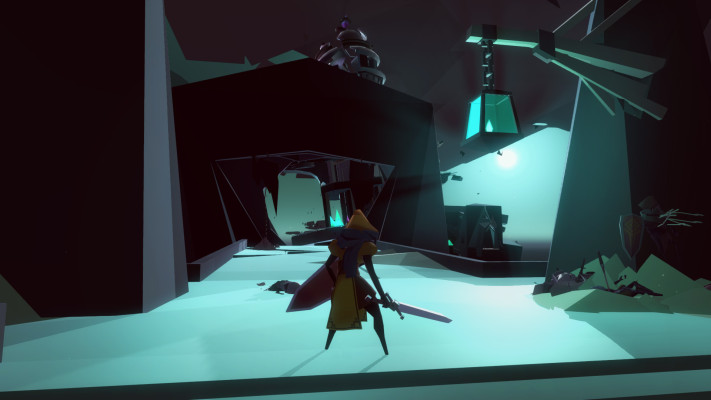 At every step you’re goaded on by Brazen Head, the archmage’s magical servant who serves as both guide and antagonist in a manner similar to GLaDOS or Hand of Fate’s Dealer. His taunts are amusing, but it can be a little hard to read them while keeping an eye out for danger. Harebrained Schemes says that at this stage they aren’t planning to implement voiceover – it would be difficult and expensive given that they want Brazen Head to have a lot of dynamic, reactive dialogue over the course of the game – but as it stands the lines are a little too easy to miss.

The prototype I played was pre-constructed — Harebrained Schemes is still working on the game’s procedural elements — but it showcased all of these ideas quite effectively. Even for a prototype the level design was smart and tight to the point I’m almost disappointed that the main game will be procedural, but with clever level generation the finished product can be even better. I’m sure the combat mechanics will see a great deal of refinement in the coming months, but already they feel really solid. Enemies provide a real challenge without being insurmountable, and there’s a palpable tension that builds between encounters. Necropolis has all the makings of a smash hit – the kind of Roguelike that hardcore players will brag about beating for years to come.