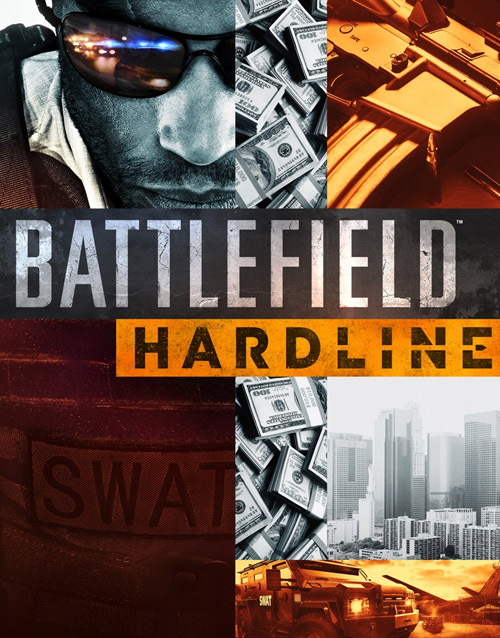 Hardline takes players off the battlefields of Russia and the Middle-East, and places them on the streets of Miami and LA. The war on drugs is not going well, and as Nick Mendoza, a newly made detective in the police, players will spend three years of his life putting down gangs and removing corruption from the police force. Battlefield Hardline’s campaign pulls inspiration from crime shows like CSI, Hawaii Five-0, and True Detective. If you’ve ever been a fan of these types of shows, then the many plot-twists won’t be all that surprising. Still, Hardline tells an entertaining story.

Characters are fully fleshed out thanks to clever writing, acting and Hardline’s unique “TV Presentation” aesthetic. It’s corny at times, but this is the best story and set of characters in a Battlefield game since Bad Company 2. The plot does have a few slip-ups, though, including disappointing endings for the antagonists and a cliffhanger ending that fails to tie up loose ends. Though the story and characters never quite reach the high set by Bad Company 2, Hardline does deliver one of the better stories in franchise history.

Hardline trades in the structured, linear gameplay found in Battlefield 3 and 4 for the openness of Battlefield: Bad Company 2. As Nick, players are dropped into huge playgrounds and given free rein on how to approach objectives. Want to sneakily takedown an entire campground? You can do that. Want to shoot-up an entire island? Yes, you can do that too. There are a few linear areas, particularly at the beginning of the game, but the open-design is a welcome change from the set-piece heavy formula the Battlefield franchise has been chasing. Tactical Gear lockers and briefcases make a return from Bad Company 2, allowing any unlocked weapon to be equipped. 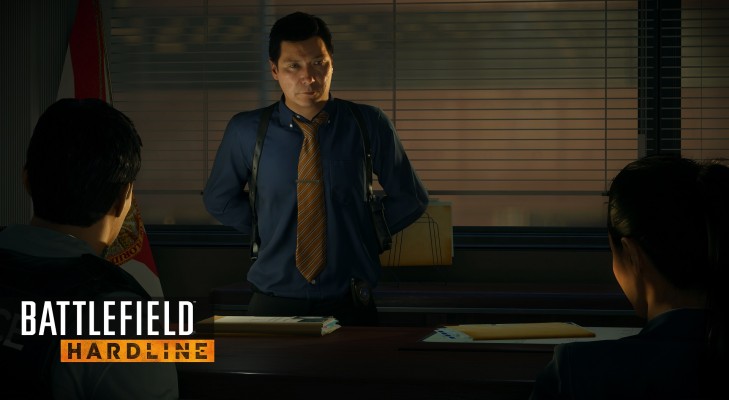 Hardline goes a long way to make the player feel like they have impact in the world. New weapons and gear can be unlocked by leveling up Expert Rankings. This meter fills up when objectives are completed, enemies are tagged, non-lethal takedowns are preformed and sidequests are completed. These sidequests involve successfully arresting targets with warrants and solving crimes by collecting case files hidden throughout each episode. They’re fun, little distractions that are well worth the time for anyone looking to unlock extra weapons and gear.

It’s too bad that playing the campaign isn’t as open as the design would suggest. It’s clear that Visceral wants players to play like a cop, but fails to provide the proper tools. You can flash your badge to freeze up to three enemies at a time and arrest them, knock them out from behind, create distractions, or tase them with a short-range taser. Those are the only available cop options and leave much to be desired. It would have been nice to have a mid-long range tranquilizer sniper or a tranquilizer pistol.

Enemy encounters boil down to two simple routines; players enter at a scene and take out all the enemies, or the enemies are at a scene and the player has to take them take them out. The AI is relatively dumb, allowing Nick to sneak by with ease, and making encounters feel more like a chore than anything else. What’s worse are the firefights, which suck out whatever joy is left in the campaign. Nick can’t take many hits before he dies, but enemies can be bullet-sponges. Dying in firefights is easy, especially if caught trying to sneak around. The enemy swarms on Nick quickly and it’s game over. 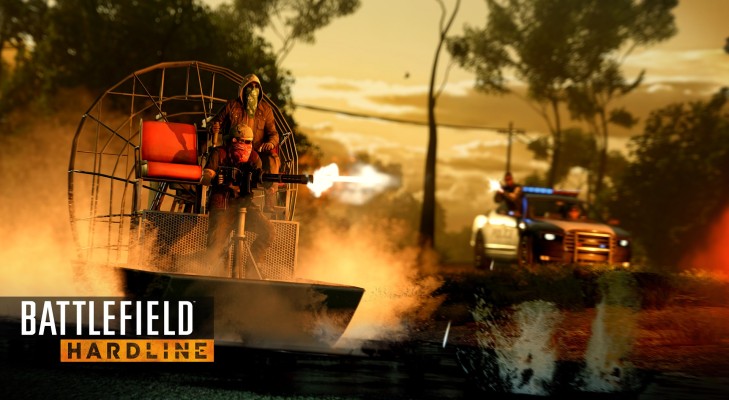 Thankfully, the multiplayer is quite fantastic. Visceral Games may not have revolutionized Battlefield multiplayer, but they have delivered the most balanced, stable and fastest Battlefield multiplayer to date. The studio has learned from the mistakes of Battlefield 4, and the game is currently stable. There are a few bugs here and there (mostly audio), but the experience remains unhampered by net code issues.

Hardline multiplayer follows the basic Battlefield formula, but with a catch. The four classes are still there, though given new names to fit in with the cops and robbers theme. Rather than unlocking new weapons through experience, players are now given the option to purchase any weapon in any order with cash, which is accumulated by scoring and completing objectives. There are 51 weapons in-game, some of which are exclusive to cops, and others to robbers. It’s an interesting dynamic, though it will separate players from their favorite weapons.

There are a total of nine maps out of the box. Though it sounds like a small amount, these are some of the best maps the franchise has had in years. The key is that each map has been fine tuned to work well with certain game modes. Rather than attempting to force all modes to work on every map like in Battlefield 4, Visceral opted to create maps that work with certain modes. Large maps like Downtown work perfectly with Hotwire, Conquest and Blood Money. Meanwhile, small maps like Block and Growhouse work perfectly for Rescue and Crossfire. 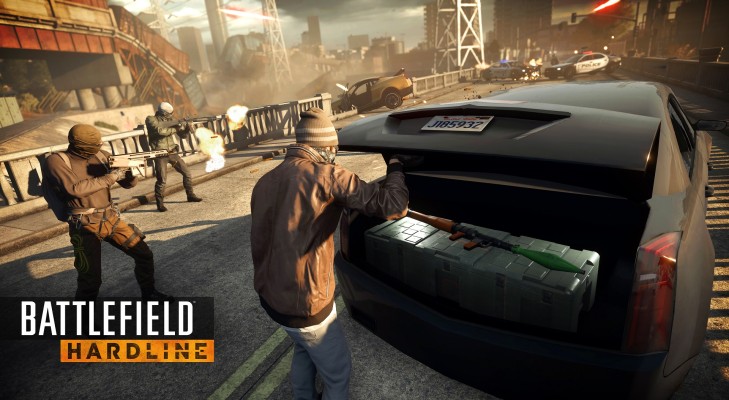 What sets Hardline multiplayer apart from previous Battlefields is its sense of speed. Everything about Hardline is faster than in previous Battlefield games. Player movement, fast cars and new gadgets make getting around in-game snappy. This sense of speed plays well into Hotwire, one of seven game modes. Think of Hotwire as mobile Conquest, where players fight to control and hold specific vehicles on the map. It’s fast, frantic and a highlight.

Blood Money and Heist serve as replacements for Rush and Capture the Flag. In Blood Money, players must capture sackfuls of cash and return it to their vault. It’s not nearly as fast as Hotwire, but the dynamic of players changing tactics as they rush the money pile and defend their vaults makes this a mode worth checking out. Heist has criminals attempt to break in and steal two loot bags, and cops trying to prevent them from escaping. This mode requires strategy and teamwork from both teams and bears a heavy resemblance to Rush. With a good team this is fun, with two good teams it’s a blast, but with bad teams it feels like a chore.

Rescue and Crossfire serve as Hardline’s eSport modes. These 5vs5 matches are perma-death with a team needing 5/9 wins to secure victory. Rescue is perhaps Hardline’s laziest mode. Cops must rescue one of two victims, and cops must either bide their time, or kill all the cops. Rescue quickly turns into a game of cat-and-mouse with criminals having little-to-no tools to repel the cops. The mode had potential, but the tools aren’t there to make Rescue interesting. Crossfire fairs much better with four cops escorting a VIP (the fifth player) to safety. Armed with only a golden gun, the VIP must make it to the drop-off zone before the criminals can kill him. Filled with genuine tension, Crosshair is a fine addition. 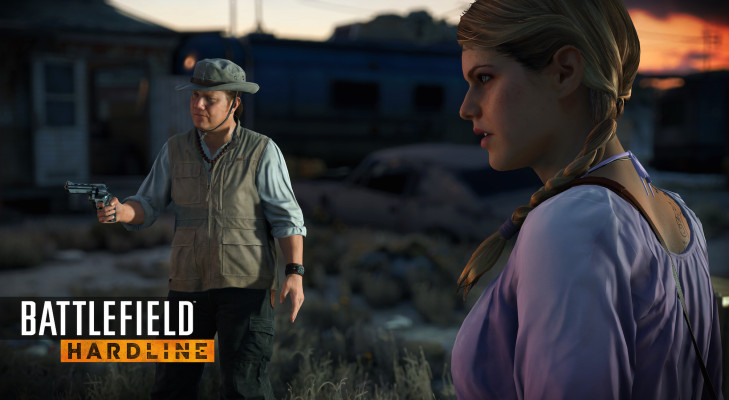 Rounding out the lineup are returning modes Conquest and Team Deathmatch, which don’t fare as well in Hardline as they did in Battlefield 4. Spawning in both modes is rather atrocious. Expect to be spawn killed, placed either in front of or behind an enemy, or run over quickly by a vehicle. Team Deathmatch is further damaged by the ludicrously high 400 score victory condition, which leaves matches running too long. Conquest is still good fun, but Team Deathmatch is both frustrating and boring.

A toned-down version of Levolution returns from Battlefield 4. Crazy Levolution events, like falling skyscrapers, have been replaced with more meaningful events, and a greater emphasis on destruction. After being toned down in the past two Battlefield games, destruction makes a big return in Battlefield Hardline. Walls, decorations, floors and even entire buildings will come crumbling down, all features that have been missing since Bad Company 2. Levolution in Hardline isn’t about making cool things go boom, but rather about forcing players to adapt and create new strategies. A fallen crane may create a new entry path for one team and another place to defend for the other. Storms and dust obscure vision, forcing close-quarters combat. Visceral was smart by bringing back destruction and making Levolution more strategic.

Hardline is running on the Frostbite 3 engine and mostly looks good. A lot of time and effort was placed in creating the main cast, which all look fantastic. Nick, Khai, Tyson, Stoddard and the rest of the main cast look great with some superb motion capture. Random character models and textures don’t get quite the same treatment, however, and end up lacking detail. 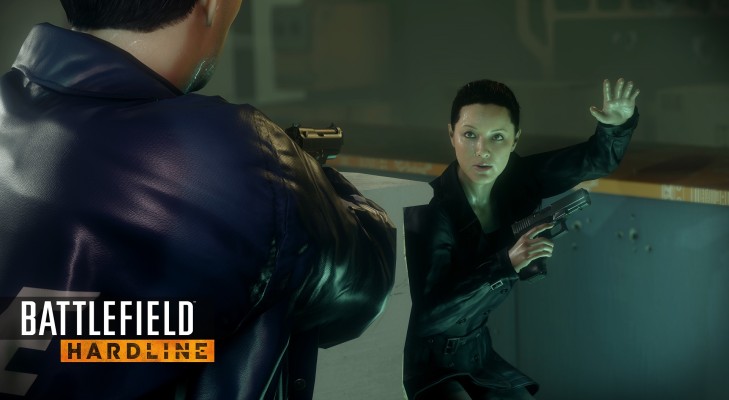 Environments look sharp, and there isn’t too much difference between the PS4 and PC versions. It’s still easy to tell that Battlefield Hardline is a cross-gen title. Foliage and wildlife (mostly alligators) appear pixelated and animate awkwardly. There’s also quite a bit of pop-in, particularly in wide open areas, such as the Everglades. Still, credit has to be given where it’s due, and Visceral has developed a good looking game. The graphical leap between pre-rendered cutscene and gameplay is almost indistinguishable, while the environments are detailed enough to make players stop and soak in the detail.

A great cast of actors rounds out Hardline’s presentation. Visceral pulled in famous actors from hit crime shows to populate the cast, and they do not disappoint. Nicholas Gonzales (Sleepy Hollow, The Flash), Kelly Hu (Castle, CSI, Hawaii Five-0), and Benito Martinez (House of Cards, CSI, The Shield) deliver great performances under the direction of Bill Johnson (Justified, The Americans, The West Wing). This is a great first step for Battlefield in the acting department and hopefully the franchise continues to pull in strong talent. 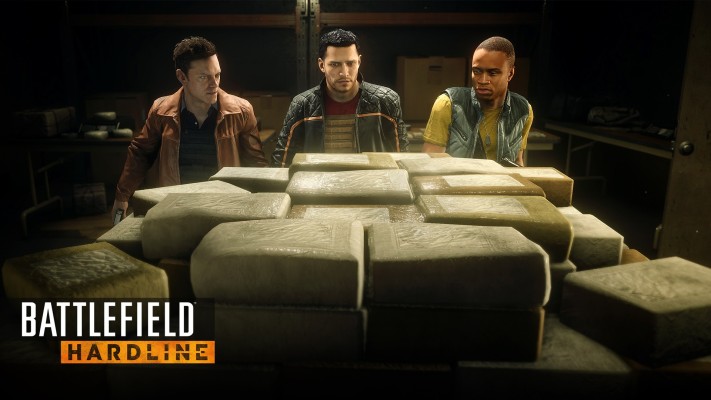 Battlefield Hardline could have gone wrong in so many ways. It’s a testament to Visceral Games as a studio that they were able to make Hardline as good as it is. The multiplayer experience is fantastic thanks to some interesting new modes, a sense of speed, map design, increased focus on destruction and the fact that the game actually works. The campaign pulls in some strong performances from its actors and earns points for its open-design. The campaign gameplay, however, leaves much to be desired. Still, it’s a step in the right direction for future Battlefield games. Hardline may not revolutionize the Battlefield brand, but it fixes many of its biggest problems.