Although Battlefield Hardline was released just hours ago, that’s not stopping nearly seventy thousand people from already playing the game. Most surprisingly, however, is how big of an early lead the Xbox One version of the game has over the PS4 version in early hours.

Two hours after the game came out, the Xbox One version of the game had a whopping lead of nearly double the total amount of players.

Now that the game has been out for three hours, that lead has dwindled, but the Xbox One still has a healthy 40% lead on the PS4 version of the game: 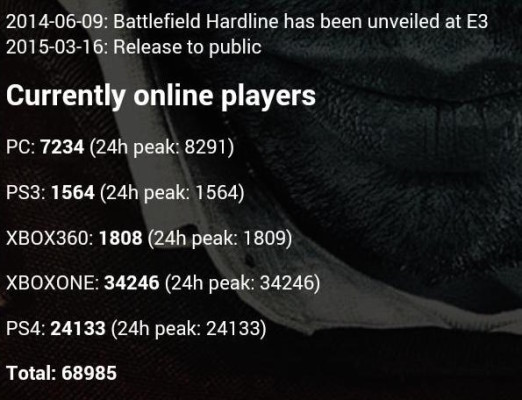 While EA Access members had access to the game five days ago, they were only allotted ten hours before being locked out, which likely means that almost all of Hardline’s current players are midnight launch customers. As such, likely only the most dedicated fans are currently playing, which could simply signal that Xbox One has a far greater proportion of hardcore FPS gamers.

Late Tuesday night — when the majority of day one purchasing general public are online — will give us the most accurate indication of console popularity moving forward.