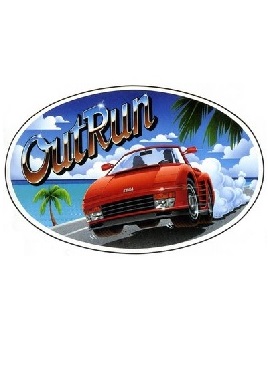 The Sega 3D Classics line has been a complete and utter success for Sega. Not only have they dug into their treasure trove of bygone era gaming goodness, but they’ve opted to showcase some of the pinnacle titles that helped define not only the culture of gaming, but a time in history. While February’s installment in this 3DS series was a fun venture into the colorful world of Fantasy Zone, it felt lackluster when juxtaposed with the titles in the 3D Classics lineup that came before it; historically important titles that helped solidfy Sega’s gaming identity in the 80s and early 90s. Fortunately, this latest entry, Out Run, is not only one of the company’s best games from the first (and second) generation, but is also one of the best titles M2 has emulated for the 3D Classics.

For starters, Out Run‘s gameplay feels effortlessly fulfilling. As a racer, the title manages to combine speed, challenge, and that ever-so-lovely “I just want to keep playing to get better” quality to make for a well-rounded experience that’s ideal for on-the-go gaming. Whether players want to dedicate two hours, or just two minutes, there’s always something to accomplish in 3D Out Run. What’s most impressive, then, about this title is how it balances break-neck speeds and difficulty. It could have been easy for Sega to opt for a game that was ruthlessly challenging, but instead they have given us something that is indeed hard to master, but not to the point of wanting to toss the 3DS against a wall. The sense of speed is what is maybe most impressive about Out Run, as when the speedometer in the left-hand corner reads 245kph, it actually feels that fast. Cars and terrain just whiz past, feeding into that impression that the player really does have their pedal to the metal.

Unfortunately, how stages are designed does not always coincide effectively with burning rubber. Because Out Run started off as an arcade game, it’s clear to see that in many ways it’s designed to eat quarters. Meaning to say, stages are riddled with obstacles to throw folks off course. Sharp turns and traffic are the two culprits that will derail players the most, and when mixed in with the lightning fast speed of the game, it creates for some frustrating segments. While this kind of design may have sufficed for arcades in the 80s, it doesn’t translate well to gameplay in the year 2015. 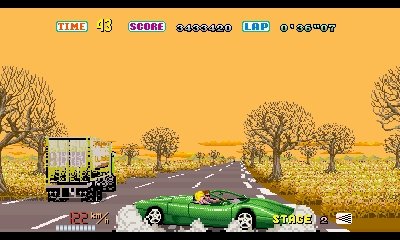 There are times when players will be coasting along and a turn will comeout of nowhere thanks to a poor camera and the aforesaid sense of motion. We found ourselves crashing time and time again because of this. This was unfortunate, not just because it felt cheap, but because it hindered what makes Out Run so great: just cruising fast. Thankfully, these instances don’t make up the enire experience, or even a majority of it, so it never becomes overwhelmingly maddening. Just know that, toward the end of a stage, the game will throw these types of challenges at folks as a way to impede their progress.

This is probably because the developers didn’t want it to be too easy to breeze through the content. There’s only five stages, so if there weren’t moments of challenge, the whole thing wouldn’t last longer than 20 minutes. It would have been nice for Out Run to come packaged with more stages, but alas, it does not as arcade games weren’t designed to be incredibly long. Thankfully though, Sega attempted to make up for this by adding in multiple branching paths per stage. When folks get to a critical point in a level, they will need to choose which direction to go at a branching path. Each path has different trials and tribulations, along with scenery, so even though there are just under a half-dozen tracks, there’s decent replayability even if it’s just to go back and see the various routes that weren’t explored in the first go-around.

At any rate, what really serves 3D Out Run well are the controls. They are tight and responsive, and keep things simple. Thus, don’t expect a convoluted control scheme. This is all about laying on the gas and maneuvering with precision. A game that is already challenging can be made more difficult by poor controls; hence, the game’s ability to deliver on this front is much appreciated. 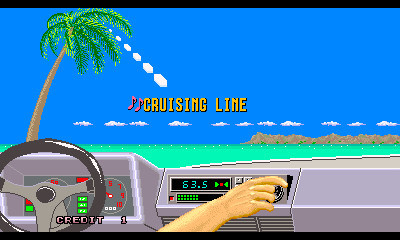 For being a game that is a few decades old now, it would be easy for 3D Out Run to look hideous. But thanks to Sega’s art direction with the game, and the use of vibrant hues and the entire color wheel, the graphics are really quite beautiful for a 2D game. In motion things look great, with animations that were ahead of their time (just pay attention to the brutal car crashes). What’s not as beautiful, however, is trying to play the game with the 3D slider ratcheted up. Because of how fast the game is by nature, the 3D effect is almost too good, making it hard not to feel a little nauseous when everything is flying by.

But this is a minor gripe, especially when considering the other aspect of the game’s presentation: the audio. Out Run sometimes is remembered first and foremost, not for its gameplay, but for its soundtrack. Although the original title only packed three tracks, they were absolutely astounding. In this 3D iteration, we get an additional two, which fit right in with the original trio, and are catchy as all get-out. Truly, Out Run warrants a purcahse just to check out its music, which can be selected by the player efore starting any course. It’s a wonderful tracklist of 80s synth that complements the rolling hills and beachside locales nigh perfectly.

Much like with 3D After Burner II and Fantasy Zone before it, 3D Out Run would have benefited from some kind of multiplayer feature, even if it was just some kind of leaderboard integration. These games were meant for score-chasers, as seeing your initial at the top of the rankings in the local arcade is what we are strived for. Having that kind of feature present in the form of leaderboards would have been excellent. Missing this feels like a missed opportunity. 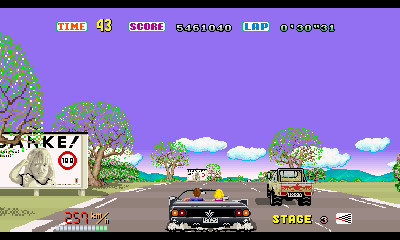 3D Out Run is one of the best titles in the entire Sega 3D Classics catalog, and hands down the best installment in wave 2 thus far. Not only does it offer the most rock-solid gameplay and a fantastic presentation, but it feels historically important to boot. It has its share of issues, namely those surrounding cheap design tricks to prevent players from breezing through the light amount of content and the lack of leaderboard implementation. By and large, though, this is a game that shouldn’t be missed by anyone who appreciates Sega and/or gaming experiences of the late 80s and early 90s.