Confession: I adore Lovers in a Dangerous Spacetime. It represents everything I love about couch co-op titles, from its overall level of insanity to the sheer amount of teamwork and communication it requires. What’s more, Asteroid Base seems committed to doing everything in its power to make this platformer/shoot-’em-up an overwhelming success, and for that, a fair heaping of praise deserves to be thrown their way.

To date, I’ve seen Lovers in a Dangerous Spacetime at three different shows. Every single time I grab a controller and step foot into this colorful, hectic, ludicrous universe, something is different. There’s always some new mechanic at play, be it the ability to combine upgrades, boss battles, or different playable characters. The three-man team over at Asteroid Base has consistently portrayed themselves as accessible, friendly, and determined, so much so that the rest of the industry should really be taking note. They’re already talking about post-launch support, and when you add this to the level of excitement that comes to their faces whenever they discuss any aspect of Lovers, you know that this has the makings of something special. 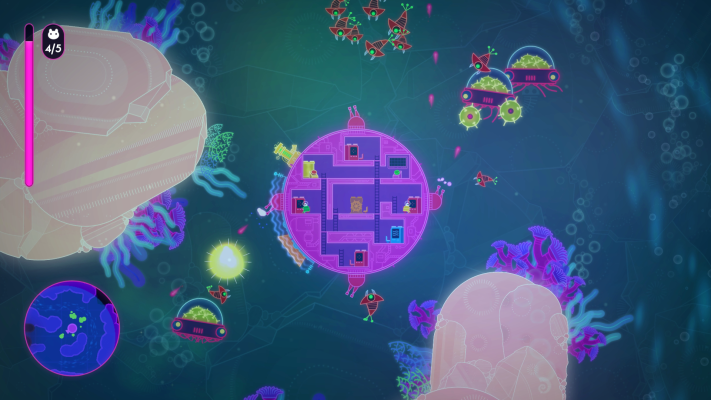 Let’s get into what’s different in the latest Lovers build, shall we? Upon booting things up, players are treated to a character and level selection screen that was never present before. In my massive interview with Adam Winkels and Matt Hammill, they discussed Lovers‘ Starfox inspirations, which included the bunnies that players were required to save, as well as frogs, birds, and foxes that would eventually make their way into the finished product. It’s a joy to report that players now have the ability to play as Falco and Slippy Toad (though, to be fair, this isn’t what they’re actually called) as well as the two human lovers that were a staple of previous builds. I don’t know about you, but when given the option to chose between a frog in a human’s body and a regular old person, as cute as said person may be, I’m going to go with the frog every single time. Now granted, these character differences are purely cosmetic at this point, but knowing the development team, there’s always a chance for gameplay tweaks to be made to each avatar. Still, even though there’s nothing about these adorable frogs, bunnies, and birds to enjoy other than their cuteness, it’s some damn fine cuteness that’ll make your heart melt into a wonderful pile of goo. Wait, that was pretty graphic wasn’t it?

There’s an increased emphasis on ship selection, with spacecraft featuring multiple divisions taking the spotlight. The traditional ship allows either player to navigate to any of the available computers, thus allowing anyone to control any aspect of the ship (navigation, shields, weapons, special abilities, etc.). A ship with divisions allows either player to fly the ship, but features on one side are relegated to one player, and vise versa. I was able to play through a wave-based level inside of a massive, colorful wormhole in one of these bizarre ships, and the frantic communication that resulted could have been recorded and used for a trailer or commercial. The massive, but still adorable, beasts that constantly flooded the screen required our immediate attention constantly, even though our overarching goal was to protect a warp-drive on the outside of the ship. It’s this central conflict that lies at the center of Lovers in a Dangerous Spacetime: there’s a handful of things I have to do right now, but I can only attend to one of them at a time. You’re supposed to be overwhelmed, and your feelings of constant micromanagement are totally normal, so get used to it, you animals. 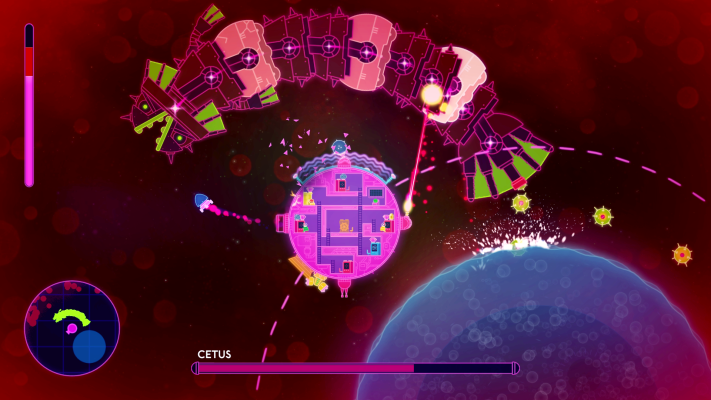 As I mentioned before, the single most impressive aspect of Lovers in a Dangerous Spacetime is the fact that it tangibly evolves every time it’s shown. There are certain developers, most notably in the AAA space, that are content with showing the exact same demo to the exact same people over and over again. Asteroid Base seems committed to making the best game possible, even though only three people are ever working on the project at once. If there’s one thing that Lovers in a Dangerous Spacetime can teach us, it’s that less is often more. With a small development team, the opportunity for experimentation and focused work is there for the taking. Let’s imagine, for a second, that Lovers was being developed by a 1000 person team. How much red tape and nonsense would one person have to go through to get their idea heard? Would being creative ultimately be a waste of time? This feels like a passion project, through and through, and I don’t think I’d be all that insane to argue that that commitment is going to exist well past Lovers in a Dangerous Spacetime‘s Summer launch.

If my extended time with the ever-evolving Lovers in a Dangerous Spacetime is any indication, PC and Xbox gamers are going to find themselves playing a gem in the coming months. Those seeking a gripping, chaotic local multiplayer experience should look no further; even though this was designed to be an experience for two people, single-player focused gamers will still be able to enjoy all of the focus with the adorable Space Dog. Most importantly, this is the type of game that makes you excited for the future of the industry. Small independent developers are loaded with creative, hard-working individuals that do everything in their power to ensure that their game is as great as possible. If you’re tired of the nonsense that surrounds AAA titles in this day and age, support smaller projects like this, as they are the true future of gaming.