Ah, the Game Boy. Nintendo’s flagship handheld captured our hearts and caused our parents to call every handheld console, regardless of brand or title, by the very same name. It’s the system that spawned Pokémania and, again, thousands of parents using incorrect nomenclature. Forget about the fact that the Game Boy’s name caused everyone over 35 to sound like an uninformed dork; let’s concentrate on something that no one tends to talk about: the feeling its games inspired.

You know those moments where you definitely feel something, only you can’t necessarily pin down what it is? There was something special about handheld Tetris, Pokémon Red and Blue, and even the weird Egyptian levels of the criminally underrated Super Mario Land. These monochromatic gems shaped our beliefs about handheld gaming, making us believe that amazing games could be brought with us on the go. While no one in their right minds would claim that Downwell is on the same level as some of the Game Boy’s classic titles, I was surprised to notice that it elicited some of the same feelings as those that defined 90s handheld gaming. 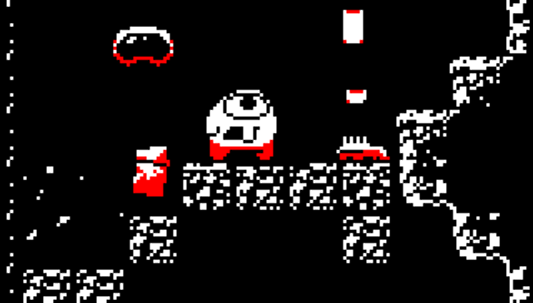 So what exactly is Downwell? Well, if you were at PAX East for even a fraction of a day, you probably heard copious bleeps and bloops bleeping and blooping from its booth. If you weren’t there, you’ve probably haven’t seen too much information on the quirky platformer, as a quick Google search for it can bring up far too many high school boys basketball scores if you’re not careful This bizarre black-and-white title is relatively easy to explain: you’re a dude with guns on your feet, and you have to drop down a well. The fact that I was able to describe its premise in part of a sentence speaks to its simplicity. Then again, if your game is so difficult to explain that it requires oodles and oodles of text, that’s probably indicative of a much larger problem. In case you were wondering, yes, you do shoot enemies that are directly below you, meaning that this is essentially a platformer turned ninety degrees. I was able to experience Downwell in two completely different ways: on a tiny iPhone and on a vertically-shifted television set with a controller. While I understand the appeal of mobile gaming, having on-screen buttons, no matter how simple they are (Downwell only has left, right, and jump buttons), I need the type of tactile feedback that only comes with a mouse and keyboard or controller. With that said, I didn’t necessarily want to jump off of a bridge while playing the iOS version, but my eyes were continually drawn to that glorious television screen next to me.

I’m sure that my aversion to Downwell‘s mobile version was due to, in part, the massive splint on my giant right hand and my distaste for small electronic devices. If this was running on a Samsung Galaxy Note or iPhone 6 Plus, things would probably have been simpler for a giant like myself. What’s more important is that there appears to be complete parity between the PC and mobile versions, which isn’t necessarily surprising considering Downwell‘s simple nature. Platform differences aside, for a pick up and play title, this functions quite well. Every enemy that you shoot with your gun-boots (Author’s Note: Gun-Boots are awesome) releases gems which can be used to buy extra hit-points, character upgrades, and all sorts of goodies. We all know that gems are the key to upgrading the Pillsbury Dough Boy, who is, without a doubt, your character’s doppelganger. That’s basically all you need to know: you have gun-boots, you earn gems, and you look like some sort of white biscuit mascot. 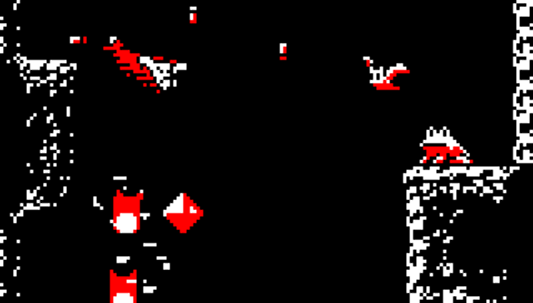 Everything about Downwell feels old-school, from its visuals, to its tight platforming, to its four hear health system. Even though I didn’t necessarily love the mobile version, it’s clear that attempting to conquer the mobile market was the correct choice. When you consider how many smart phones exist in the world, the cross-section between retro-gaming fans and mobile device owners is quite large. As previously stated, this is the perfect game for pick-up-and-play sessions, considering that it’s a level-based, single-life, fast-paced title. My longer, more tense runs were pepper with near-instantaneous death, a dichotomy that created this sense that I needed to try just one more time. By the time I looked up and realized how much time had passed, I had been jumping and shooting enemies beneath me for roughly thirty minutes.

A simple name, simple premise, limited control inputs and a simple aesthetic make Downwell feel like a game that could have come out at any point in the last thirty years. Granted, there’s a fair bit of underlying development work that likely make that last sentence a bit false, but its old school vibe cannot be denied. If you find yourself tired of all the mobile garbage flooding the App Store and Google Play, or you want a PC game that feels like something you would have played in 1991, it’s worth giving Downwell a fair shot. Who knows, you could be inspired to strap guns to your own shoes. Actually wait, please never do that. Thanks.