Nearly a year ago I previewed a Guild of Dungeoneering, a “reverse roguelike” that tasks you with using randomized cards to build a Dungeon around a self-directed adventurer. Though I enjoyed the writing and graph-paper visuals, I came away largely unimpressed with the gameplay, which felt more like a slot machine than an RPG. I said then that players needed to have more control of their adventurers – after all, a good roguelike gives you enough rope to hang yourself – and that the deterministic combat system needed to be reworked to prevent stalemates.

I love it when developers listen to feedback. Guild of Dungeoneering has advanced by leaps and bounds since the last time I played it. Gone is the hope resource that determines which cards you can place. Instead, you have a hand of five cards, and you can play three of them each turn. Dungeon tiles now have to connect logically (no more doors into brick walls), and you can place items freely in order to nudge your adventurer in the right direction. Defeating enemies now yields material rewards as well as experience, and the game puts you on a timer, giving you a set number of turns at the beginning of each dungeon before the boss monster enters the fray. 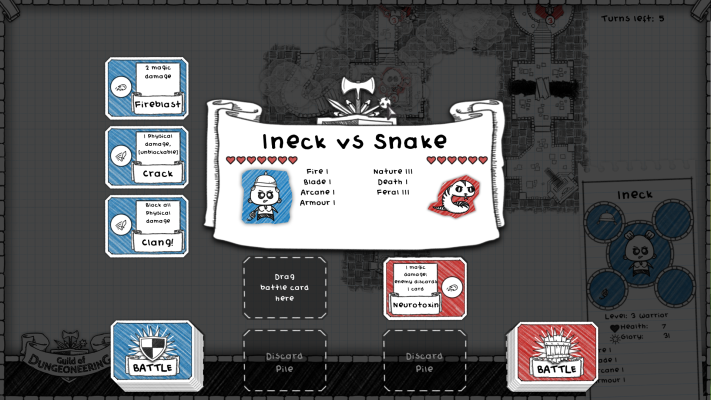 You don’t have to just wait passively for the boss to show up, either. His lair is visible on the dungeon map from the start (as well as a treasure room that offers substantial rewards) and if you can guide your adventurer to him ahead of time you can fight him before he’s at full strength. This puts pressure on you to make sure your adventurer levels up quickly, but it also makes you feel like success comes down to more than just a roll of the dice. How you build the dungeon around your hero actually makes a substantial difference to the outcome of his or her adventure.

Perhaps the biggest part of this feeling of control is the newly revamped combat system, which no longer comes down to pure stat comparisons. The game presents you with a hand of three randomized attack options drawn from a deck determined by your equipment. Once a card is played, it takes effect at the same time as the enemy’s attack card, unless you play a “quick” action which can hit first and save you if you and the enemy are both on your last legs. These attacks don’t just deal damage – they can also heal you, block enemy actions, or increase your card pool. It’s a simple dynamic but it feels strategic enough to be satisfying, and more importantly, there’s no way to become deadlocked with enemies. 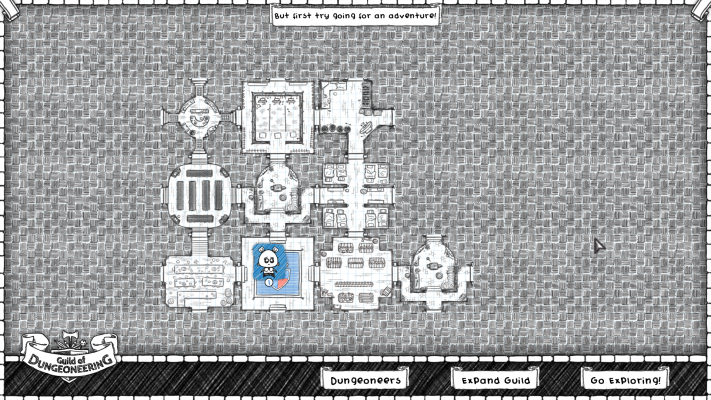 With these changes in place, Guild of Dungeoneering has become one of the more promising roguelikes currently on the horizon and an apparent point of pride in publisher Versus Evil’s lineup. Its charming graph paper aesthetic and munchkin-esque sense of humor set it apart from its more depressing contemporaries, and in turning adventures into something akin to pet management, it manages to make the standard dungeon crawling formula feel fresh. Gambrinous has managed to find the fun in their intriguing gameplay concept, and I find myself eager to see where they go with it next.