I don’t think I’ve ever seen a VR headset quite as goofy-looking as the Sulon Cortex. From the front its purpose is pretty obvious – a head-mounted display similar to the Oculus rift, but with 3D cameras on the front to allow for augmented reality experiences. On the back, though, is a bulbous black orb that looks a bit like the Steel Samurai’s superfluous topknot. But the ball doesn’t just set the Cortex apart visually – it also happens to be what makes the machine itself so special. While other augmented reality systems rely on visual information to track your environment, the Cortex is equipped with a 360-degree proximity sensor, allowing it to see everything around you at all times.

The sensor allows Sulon to turn any large room into a holodeck – well, that’s an exaggeration, but only slightly. Unlike camera-based systems, the Sulon always knows where you’re standing and which way you’re facing – its motion-tracking capabilities are 1-to-1. The sensor also allows it to spawn objects outside your field of view without breaking the confines of your environment. The Cortex does use its cameras to track your hands, allowing you to interact with virtual objects and use gesture controls. With the Cortex you don’t need fancy treadmills or motion controllers, you can just walk around exactly as you would in real life. 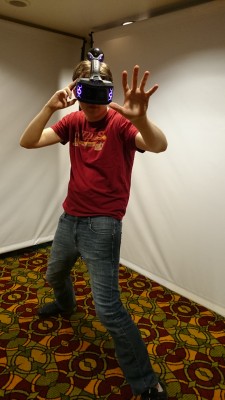 These capabilities were demonstrated to great effect in a matrix-inspired martial arts demo. As soon as I put the headset on, the room around me transformed into a dingy subway platform, and before my eyes a trenchcoated warrior emerged from a portal. In short order robots started coming out of the woodwork (brickwork?) and the man in the trenchcoat began expertly taking them out one by one. With slick animations and great texture work, this would have made for a solid Unreal Engine demo on its own, but viewed through the cortex it’s something else entirely. I could walk around to see the fight unfold from any angle, and the demo team was able to freeze the action, allowing me to move around the combatants as though I was in bullet time.  I was impressed by Superhot VR on the Rift last spring, but on the Cortex it could be positively mind blowing.

I came into the meeting expecting an augmented reality experience, though, and the second demo didn’t disappoint on that front.  I put on a separate headset, and after a few moments of darkness the room around me blinked into view. At first, looking at the world through the cortex feels a bit disconcerting. The 3D cameras are set a few inches in front of your real eyes, so everything around you is a little closer than it should be – kind of like you’re looking through very weak binoculars. There’s also a slight but perceptible lag in the video feed that take a few seconds to get used to. Once I was acclimated, though, I was amazed by what Sulon could do with the world around me.

As I was talking with the Sulon devs, I heard a noise behind me, and spun around to see a portal opening into a stone chamber lit with a dim red glow. Once I stepped through, the real world disappeared behind me, and I found myself standing in an immense cavern at one end of a bridge stretching out across a lake of magma. Following the guidance of a helpful spirit, I stepped out onto the walkway, and in short order the spirit was being menaced by floating balls of light. By thrusting my left and right hands forward, I could hurl bolts of fire and ice at the pests, clearing the way for my ghostly companion. After walking a bit further, the bridge collapsed behind me, and I became trapped on a small stone platform just a few meters across. Peering out over the edge, I felt a real sense of vertigo – I would have had to fight all my instincts to step beyond it. 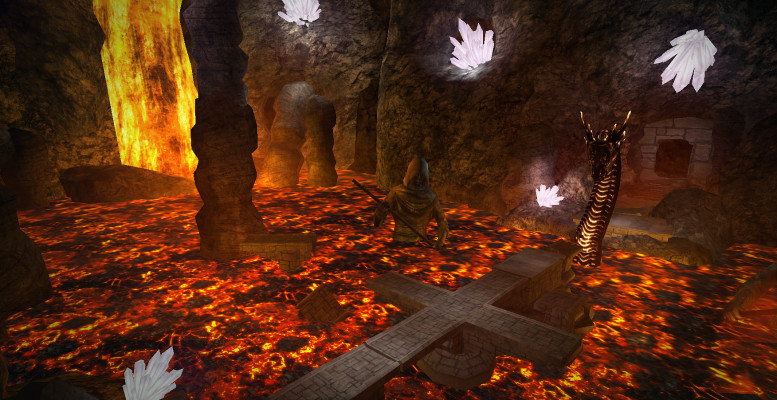 That’s when the Hydra attacked. I’ve never before been so convinced of a virtual creature’s size and presence as I was craning my neck to see that massive serpent looming over me. The illusion was broken a little when it bent forward to take a bite out of me and clipped through my torso, but this demo was a work in progress so some hiccups were inevitable. The battle was intense – after taking a few fireballs to the face the Hydra would duck beneath the magma, and I’d be left whirling around wildly, trying to catch it as it emerged again. Eventually it fell to a barrage of magic, and a portal opened to bring me back home – a funny notion, given that I could have taken the Cortex off at any time.

After I was out, the developers told me something really shocking – I had walked a full 80 meters within the 20×10 foot demo room, all while feeling as though I was moving in a straight line. Amazing as their gear is, one of the most impressive tricks at Sulon’s disposal is their environment-mapping software, which subtly redirects you as you move forward so that you never hit a wall that’s not supposed to be there. Of course, there are some potential limitations – you need a relatively large room for the software to work its magic – but even in saying that the appeal is clear: this goofy little machine is magic.