MOBAs are a huge thing in PC gaming and have already taken the mobile market by storm, but they haven’t cracked the console space yet. While Guardians of Middle-Earth gave it a go years ago, it never gained much traction and its overhead view wasn’t the most user-friendly out there. Now, Hi-Rez Studios is poised to bring Smite to the Xbox One and give many console-centric gamers a gateway into the world of MOBAs. Gateway games can be tricky as they can alienate some hardcore fans of a genre, but they can also be used to greatly expand that genre’s definition and audience over time.

As a result of that, gateway games are an underrated part of gaming. Titanfall was a gateway FPS for me over a year ago when its beta launched and showed me how effective the FPS genre can be when merged with some platforming and a good David vs. Goliath battle a lá Shadow of the Colossus. With Smite, you get a MOBA that has a lot of strategic elements involved, but the core gameplay is action-oriented. No matter which character class you choose, you’ll be actively competing every second you’re not dead in some form or fashion. 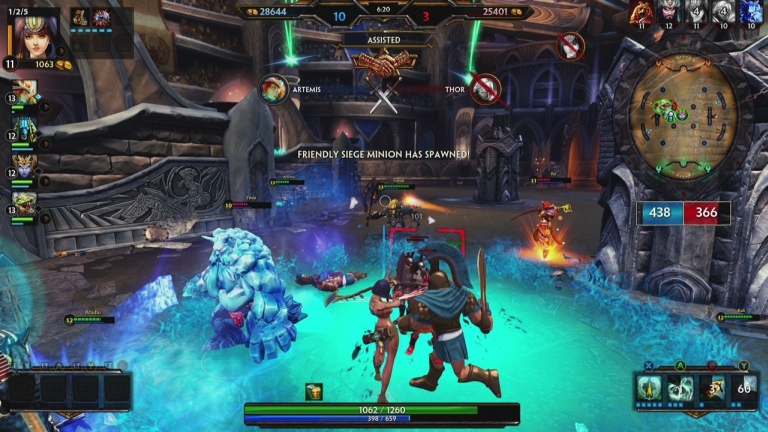 If you go with a long-range fighter, then you can really pick off minions with ease from afar and minimize risk — but do far less damage in the process. Going all-in with a melee-oriented character can be more thrilling, but it’s a lot riskier too. Fortunately, as you play more games, you learn little tricks to stay alive and help your team win. No matter what type of character you’re using, you’ll be able to pick off minions to gain XP and rotate your face button attacks regularly. Each one recharges at a different rate, with the A, X, and B attacks being reasonably powerful, while Y dishes out an ultimate attack. You can combine a bumper and face button attack to unleash pure Hell on the battlefield – but your stock is far more limited and they take forever to charge up. Despite having so many combat options, they never get confusing. This aspect is greatly-helped by the excellent on-screen display that shows you every attack you have and what it’s mapped to. The same goes for your healing items as well.

Smite‘s action-heavy approach is very accommodating to new MOBA players because you can largely just approach the game as a third-person action game and do just fine. The biggest hurdle to overcome is knowing when to abandon the fight for a bit and recharge your health during arena combat. When you’ve really mastered that setup, then you’re ready for the lane-based battles that are tougher. If you feel like your skills have reached their peak, try out a joust.  It’s one on one combat with only each side having equal minions and helper spirits. Every mode is available online, and the learning curve is gradual. Practice modes are available and you’ll to make liberal use of them to learn the ropes. 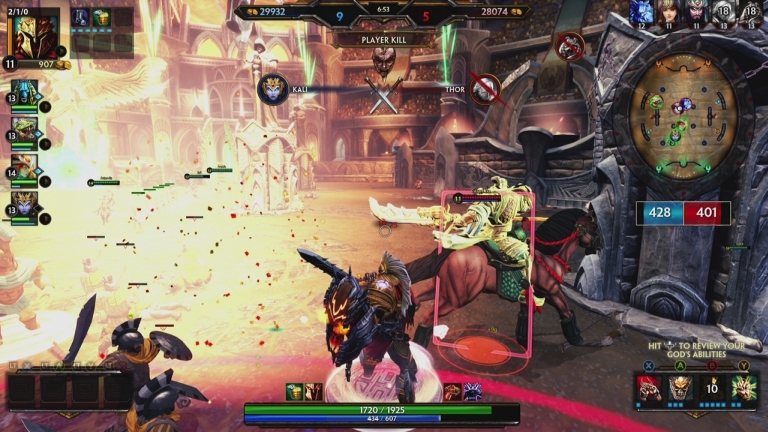 Theoretically, taking a PC-centric game and moving it to a controller-only setup is a recipe for disaster more often than not. While it may seem like a recent issue, it’s been going on for many years now with console owners struggling to play things like Theme Park for years, with very few exceptions since many games just weren’t intended to be used with a controller and console-based mice were in fairly short supply. Here, the controller mapping is logical and the HUD is perfectly-designed to let you know everything you need to for your items and attacks. There’s even a small amount of controller vibration when your health is low, which is a very nice touch.

Even in alpha form, the gameplay is silky-smooth. Online play is largely lag-free as well, which is pretty amazing. It’s likely aided by being a closed alpha, but after years of poor online setups killing games, seeing one done so well so early in the game’s lifespan is promising. The biggest issue we encountered online involved teleporting around the playing field. It’s jarring and takes you right out of the experience, but didn’t happen very often. Hopefully, Smite‘s few online issues get ironed  out as time goes on because it’s quite impressive even in its current form. 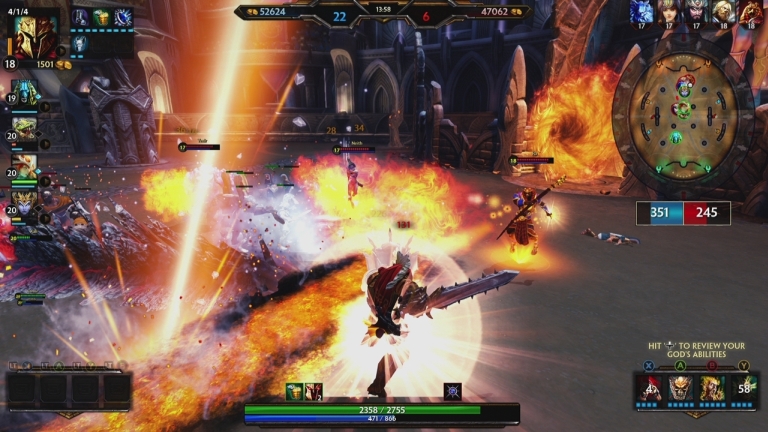 Visually, this is about on-par with an Xbox 360 game. It’s not cutting-edge, but it does look solid and there’s never a hint of slowdown. Camera problems do creep in though with the right stick not quite able to move as quickly as a mouse for horseback control. Instead of being smooth, it’s rather unwieldy. Luckily, that’s only a specialized attack for certain characters and not something that breaks the core game. The game’s lack of graphical prowess may seem like a bad thing, but it never slows down despite a ton of things happening at once. As a result, you’re left with a game that is very impressive to look at even if it isn’t at the top of the heap.

Smite greatly benefits from being ported from a beloved PC game because it’s incredibly polished and has been reworked perfectly to suit consoles. The Xbox One’s controller fits the game perfectly and the core gameplay is fast-paced enough for MOBA newcomers to learn things quickly. As a result, it’s the most user-friendly MOBA on consoles and something we recommend trying out if you can get your hands on an alpha code. Unfortunately, the game lacks a set release date, but that’s not an altogether bad thing as it gives Hi-Rez Studios a chance to fine-tune things for a long time before it’s widely available. Anyone with even a mild interest in checking out MOBAs should try out, and love, Smite.