Shadow Blade is one of the most controller-friendly mobile games on the market, which is why it was such a natural fit on PC and on OUYA. It was, however, hurt by the levels being so bite-sized since that just drove home how it was a mobile port. Now, the game has been remade with a full storyline, cutscenes, little cinematics that play when you find a new enemy and a far greater amount of levels to play through. The end result is something that takes the individual pieces that made up a good game and finally combines them into an excellent one.

Your master has been kidnapped and it’s up to you to save him by slicing and dicing enemies and/or using on-screen traps to end their days on Earth. You can go with the direct approach and just hack people up with the X button or you can jump and swoop down from above with a jumping attack. The latter is flashier and allows you to hop off of one enemy and onto another quickly. There’s a minor stealth element in the game as well where you can move slowly behind an enemy and get a fast kill. You’ll want to do this whenever possible due to one-hit deaths. 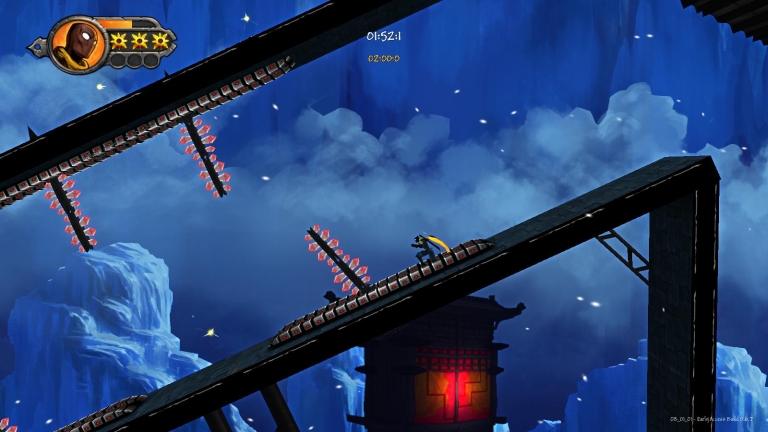 That might seem like the game is unforgiving, but it isn’t. Checkpoints are frequent and since stages don’t usually take up more than five minutes of your time, you’re never stuck replaying things a lot by force. Replaying for fun is rewarded with an increased ranking as you learn to efficiently get through the stages while exploring. Exploration isn’t a huge part of the game if you don’t want it to be, but some of the most fun you can have is getting past the game’s toughest platforming challenges to try and get either a shiny gold item or a glowing green kanji. Getting these boosts your score, confidence, and makes you feel like a better player.

Action sequences are varied, and the platforming challenges will test your skills. Beyond just trying to get everything, simply getting from point A to B can be a fun challenge since you’ve got things like rising and lowering spikes and spinning blades to contend with. If you’re tasked with overcoming these obstacles in a like-colored environment, things can be a bit tricky. However, if you’re trying to avoid blood-soaked blades against a night sky, it’s actually a little easier. The game’s difficulty ramps up nicely and never feels overwhelming. New enemies are introduced gradually and you’ll eventually learn to tackle even former mid-bosses with ease. 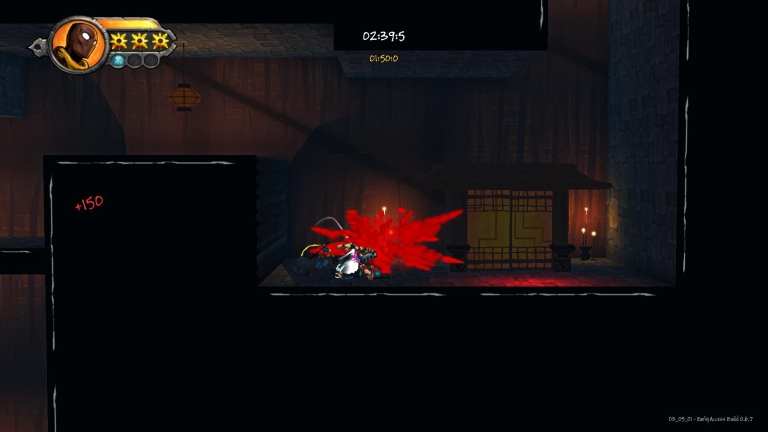 Short-range attacks are perfect for when you’re seeking some visceral thrills. You’ll see a ton of bloodshed at times, but it’s not really an overly-violent game. It’s a game starring ninjas, so it’s going to be violent by nature, but it never crosses the line to where the violence seems needless. Those wanting a bit more finesse to their combat will enjoy the pouncing attacks and chaining together dashes with air dashing using a bumper to get the jump on enemies. You can also using throwing stars, but you can’t spam them — you’re limited to three at a time and their gauge reloads somewhat slowly. This means that if you’ve got an enemy that you know you should take out with a sword, but it’s risky and you’re a bit scared, you’re going to have to overcome that fear at some point because you can’t just rely on the throwing stars to win.

Your best bet is to mix up all of your attack types. Go into close quarters with some sword-slashes and then dash around to attack from above more easily. While knocking out one of two enemies swiftly may not seem like a big deal, any advantage you can get is one you should take given the one-hit deaths. One benefit to the smaller level design is that the layouts are much easier to learn than they would otherwise be, and that means you can learn the best route and figure out where things are much faster. If you’d like larger levels, then you can try out the level editor. It’s a brand-new feature, but is certainly not ready for prime time just yet. While you make, download, and play stages, the interface for this section looks completely different than the main game and it results in a bit of a disconnect visually. 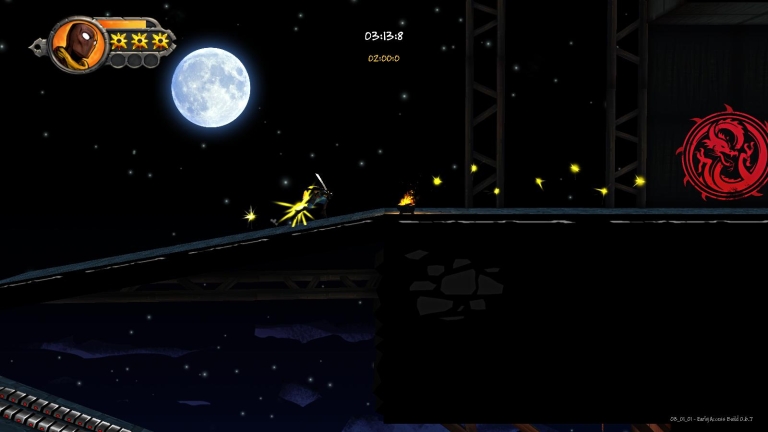 Graphically, this is about the same as the game was before — only with higher-quality assets. That’s not a bad thing as the art style was always pleasing to the eye and now you’ve got nicer character models and environments alongside sleek comic book-style cinematics. The pump up in presentation makes everything feel more fleshed out even in early access. However, some things do still show that it still needs work — many sound effects are still audible even if you have all of the audio turned off and the game can require a restart if you wind up accidentally sequence breaking the game.

Despite some rough edges and the short length of levels, Shadow Blade: Reload is still a well-made game. The early access version greatly benefits from this already being a full-fledged game beforehand in some form. If you’ve played it on the OUYA or PC before, then this revamped version is already worth a double-dip even in early access form. Anyone unfamiliar with it, but with a love for Strider or Ninja Gaiden‘s 2D entries, should keep it on their radar.