Castle Story has been in the works for a long while now, first showing up in early 2012 with its cute yellow Bricktrons working in its sunny sky-islands. It had a highly successful Kickstarter later that year, came out on Early Access in September 2013, and has been under constant construction ever since. The Bricktrons have built countless hundreds of castles and other structures according to the orders of Castle Story’s highly-active community, working their pudgy yellow butts off on buildings both beautiful and ridiculous. Castle Story is a game of mining and construction, and while that might sound more than a little Minecraft-y, there’s a world of difference between the two.

Castle Story’s main game is divided up between two game modes. In Sandbox you’re working a safe world with no threats and plenty of resources to build whatever you like. The sky islands are safe and you can work on learning Castle Story’s command and camera controls. There are several different ways to play with the camera, including manipulating the height of its central point so it can navigate mountains and valleys with ease. The Bricktrons have their own set of commands as well, and when you combine the two together you’ll be using both mouse buttons, keyboard modifiers, and contextually-sensitive on-screen menus to get everything done. It works, but it takes practice to figure out how all the bits fit together. The last thing you want to do in Survival mode is argue with a camera looking away from an imminent attack while a Bricktron builds the most useless thing imaginable. 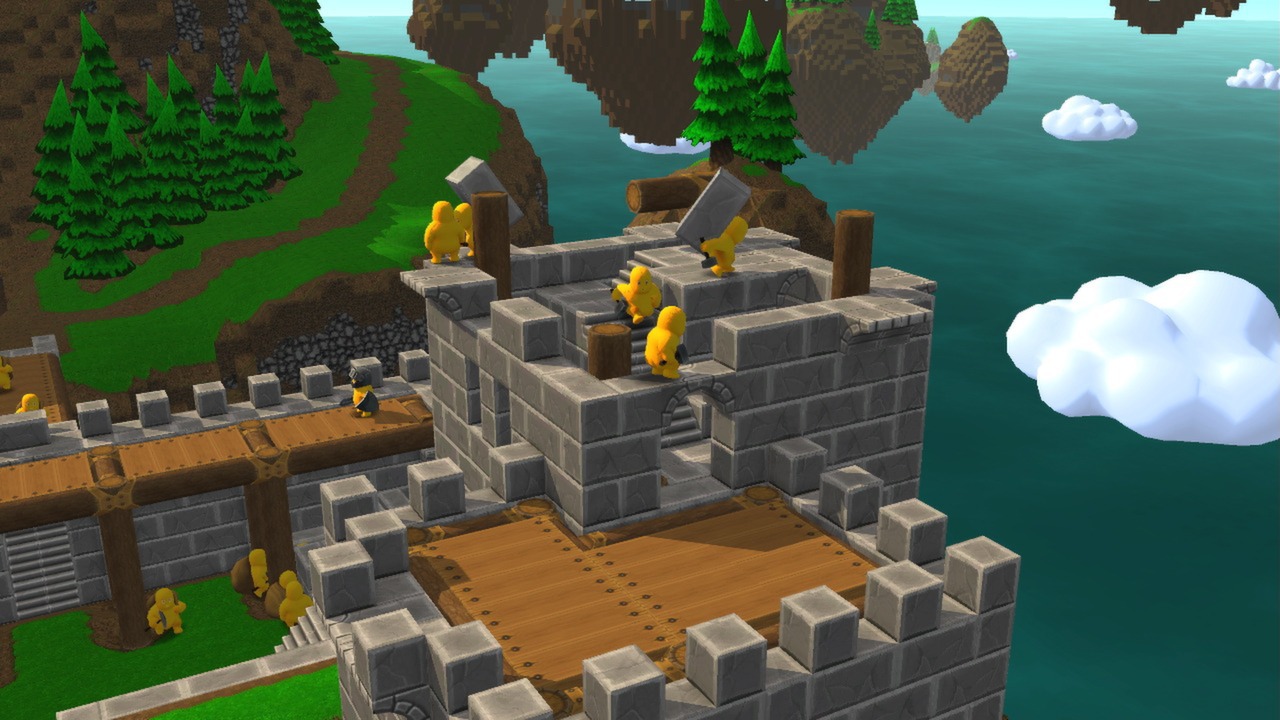 Survival mode is where Castle Story becomes more traditionally game-y. A timer counts down for the next wave of Corruptrons to storm your castle and shatter all your hard work, so you’ll need to mine, build, generate a defensive squad, and hold the fort as best you can. Basically, it turns Castle Story into a crafting-based RTS. The UI is a bit of a beast to get to grips with but once you’ve figured out which bits do what and trained your fingers properly you can build some truly impressive structures for the Corruptrons to destroy.

While the building is free-form, Castle Story blows off one of the tropes of the genre and uses hand-constructed levels for its action. One of the latest levels in the most recent update (back in December) is Big Island, which is primarily there to test out the updated rendering engine that allows the voxel engine to work with much larger areas. Much of 2014 was spent rebuilding all the systems that make Castle Story work, which is great for the long run but left many fans feeling abandoned. It’s almost a Kickstarter cliché, the Dreaded Engine Rebuild, where the developer is working furiously while having no updates to show for it. A few bugfixes have come along since December, but the next major changes to simplify building are still hanging in the development branch. It’s progress, though, and there are several big (unspecified) things planned for Castle Story’s early-2016 release.

At the moment it’s hard to recommend Castle Story unreservedly. The user interface is awkward and the gameplay feels undirected, but the Bricktrons are cute little guys and their world is an inviting place to let your building imagination run wild. It’s a green world of islands floating in a clear blue sky, covered in trees and rich with minerals waiting to be harvested and turned into castles, catapults, caverns and many other structures and resources. All that undeveloped land isn’t going to cover itself in castles, after all.