If you’re a fan of Star Wars and have a knack for creeping up into the arcade area of a Chuck E. Cheese, Namco Bandai announced that they’ve started working on pushing out new cabinets for Star Wars: Battle Pods today.

Star Wars: Battle Pods are pretty much what you would expect from every other arcade racing cabinet with seats. However, what separates them from the battle pods is the giant screen made to cover a 180-degree field of vision and the overall realistic acceleration of a pod fighter unit flying through space. The game comes packed with just five stages for the player to advance through, each depicting scenes from the actual movies. 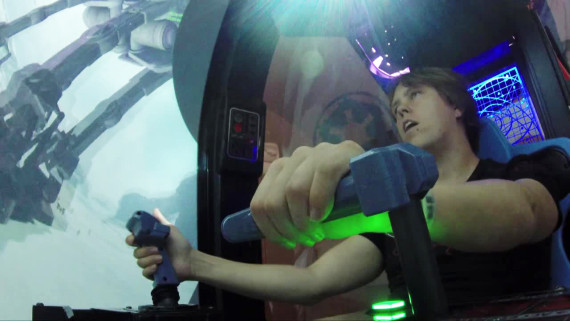 The pods were first unveiled last October during Namco Bandai’s press show at the New York Comic Con. At the time, President and Chief Executive for Namco Bandai Amusement America  John McKenzie called it an experience that hardcore Star Wars fans had to try out.

“Star Wars Battle Pod offers a real sense of flight combat action and delivers an authentic flying experience as if players are actually sitting in the cockpit of a battle pod in the Star Wars universe,” McKenzie said. “Players can experience the impact of the explosions and destruction that will leave them with a sense of actually piloting and taking part in action-packed scenes from the films.”
Now that the company has gotten the ball rolling on the production, they’ve noted that these bad boys are limited since the pre-orders for them were in high demand. If we happen to see a Star Wars: Battle Pod at our local Dave & Busters, we’ll let you know whether or not the force is with this one.