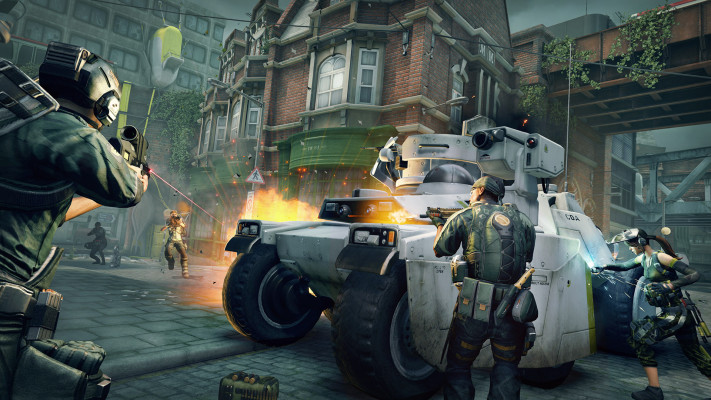 During the preview event, we were able to play several matches of Dirty Bomb‘s “stopwatch” (attack and defend) and escort modes across two maps, and even in its early state, the game is still pretty fun to play, even if much of the game’s depth doesn’t come through as strongly as it could. It feels a little like mashing up Team Fortress 2 with a Call of Duty game, and you’re really able to play it as much like either as you’d like. If you’re not super interested in messing with character-specific abilities, we found it pretty easy to forget about them, concentrate on killing other players with our standard guns, and still come out on top of a match. Nothing in the game will replace basic first-person shooter skills, and that’s encouraging to see in a free-to-play game.

At the same time, it’s probably too easy for much of that depth to fall to the wayside in favor of regular run-and-gun action, and that’s a tricky problem to solve. Player health is balanced well for a fun experience on a base level for a shooter, making it possible to survive a little longer than a game like Call of Duty while also rewarding skillful headshots with quickly downed opponents, but for a game that wants to be more than any other shooter, you might need even more health than that.

In a game like League of Legends, taking down another player character is tough and feels like an event every time. It’s a big deal, a huge reward for teamwork and effective strategic use of your Champion’s unique abilities and play style. In Dirty Bomb, taking down other players is the norm. It wasn’t uncommon for us to get a “killing spree” award for taking out five or more players in a single life during the event, and while that’s of course a satisfying achievement, it was also something we got with minimal (if any) use of our character-specific abilities and often from playing the lone gunman role. 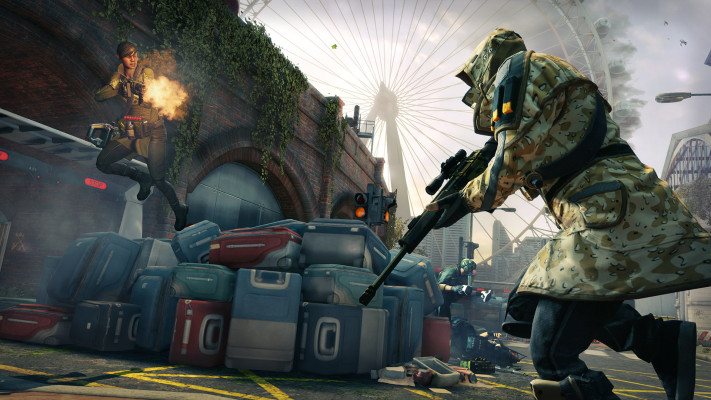 In that way, Dirty Bomb feels a little at odds with itself. It’s a fun shooter that’s built for a mouse and keyboard in all the right ways: it’s fast-paced and encourages players to fire from the hip. It’s already nailing the feel of a standard first-person shooter. But Dirty Bomb is trying to be more than a standard first-person shooter. It’s trying to take elements from games like Team Fortress 2 and League of Legends and incorporate them to make something new, something different, something better.

Dirty Bomb is already doing many things extremely well to achieve that goal, though. It respawns players in waves to encourage teamwork instead of a trickle-out-and-die scenario. It exaggerates many animations like rolling on the ground in pain to convey naturally that a player can be revived. The map designs are well-considered to offer best routes for specific classes.

Splash Damage is trying be as honest and upfront as it can be about where it feels Dirty Bomb falls short and how it could be made better, and the developers consistently made it clear that they are keen to get player feedback to ensure Dirty Bomb is the best it can be. It has a new round of closed beta testing opening up today and interested players can sign up at the game’s official website.

Dirty Bomb is scheduled to release in 2015 for PC.