During a presentation at a preview event for Dirty Bomb, Nexon’s free-to-play multiplayer shooter, developer Splash Damage hammered in the fact that “this game might not be for you.”

It’s too hardcore, the developers claimed, and too objective-based. You’ll have to work as a team, they said — no lone wolf gunmen. “But really, don’t be a dick,” said the narrator of a stylized training video played for us, calling it the game’s “golden rule.” There are wildly different characters and abilities with cooldowns that lend more depth and strategy than many players used to standard shooters will be able to deal with. “This game isn’t going to hold your hand,” the narrator warned. “It’s more likely to kick your teeth out.” Throughout the event, Dirty Bomb was touted as “difficult to learn and impossible to master,” and inside the press booklet given to us was the line “casual players need not apply.”

The presentation made it sound like we were going to be playing the Dark Souls of first-person shooters.

In practice, nothing the developers said was untrue, but in its admittedly early state, the game never felt as exclusively hardcore and impossibly deep as its marketing would have you believe. Dirty Bomb is a first-person shooter that focuses on objective modes like attack and defend or escorting a tank. There are different characters called Mercs you can choose from, each of whom will have different weapons and special abilities, like calling in an airstrike, placing proximity mines, healing and resuscitating teammates, or dropping a heartbeat sensor, and each ability has a short cooldown between uses.

Dirty Bomb is also a free-to-play game, and for many players, that’s the first thing that needs to be addressed. Especially with competitive multiplayer games, the free-to-play business model naturally gets a lot of skepticism from hardcore players wary of the possibility of “pay-to-win,” where players can simply buy their way to better performance while those unable to pay will be stuck with ineffective weapons that leave them consistently at the bottom of each match. Splash Damage made it clear that Dirty Bomb is not a “pay-to-win” game. Anything that can be bought can be earned for free, multiple developers assured us, so there would never be a time when a player can buy his or her way to the top.

Let’s take two hypothetical players, we posed to the developers. One player buys literally every single paid item the games offers, while another player staunchly refuses to spend a single dime. How different will those player experiences be? 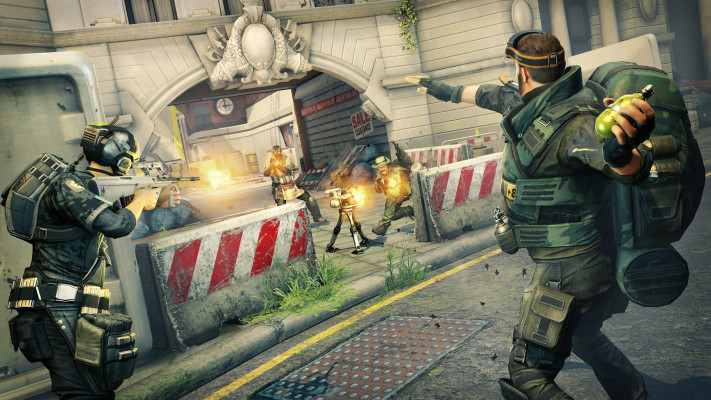 “It could be enormously different, but that could be true of people who have exactly the same investment of time and money,” said Ed Stern, lead writer on the game. “That’s the way we designed the characters, that’s to some extent the way we designed the maps — to reward different styles of gameplay. So I think that’s actually a bigger difference. I think that’s a more meaningful difference in a way.”

Stern made the point that skill will ultimately play a bigger role in how a player does than whether or not that player has bought better gear. It’s about finding the role you’re best at, he said, and sticking to it. If you’re a player who might not be great at getting headshots, for example, buying all the best gear for the sniper character doesn’t suddenly make you become a better sniper; instead, you’d be better off playing another character, like a medic.

“We don’t really think players get an advantage from paying money,” said Neil Alphonso, lead game designer. “They get cooler stuff. [They get] cooler-looking stuff.”

We asked him for clarification on whether that means most paid items in Dirty Bomb would then be cosmetic.

“There’s some slight gameplay stuff, but you can very easily get that through play,” Alphonso said. “Quite easily. And that’s the way we want it.” 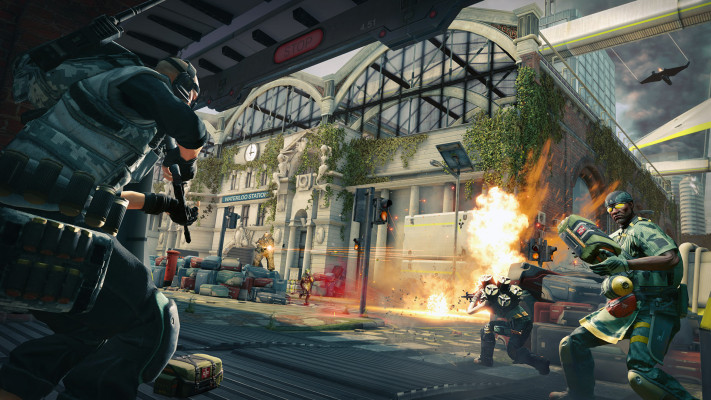 There will always be two Mercs available for free to everyone — Aura, a medic with a shotgun, and Skyhammer, an assault-style character with an airstrike ability — but there will be additional Mercs each month that rotate in and out for free. Players can purchase indefinite to specific Mercs if they’d like, or just stick with whoever is available during that month. It’s a system not unlike League of Legends, right down to how specific characters fit in different classes. Stern mentioned that Splash Damage originally wanted to shy away from labelling characters by class and instead wanted to establish character identities, but based on player feedback, Stern said that Splash Damage will be making it more clear in future builds of the game what kind of role you can expect from each character.

“We’re so intent on punching, ‘Oh, look, we’ve got these cool, different Merc characters’ — and we’re really proud of them and the fact that they’re meaningfully different in gameplay and they say kinda funny things from time to time — but I think we could be doing a significantly better job at signalling to players in advance ‘here’s what they’re good at, here’s what they’re not so great at.’

“That’s not an unreasonable thing to signal. Our visual language just isn’t there yet, but it will be. To the extent that this game is going to ship, it being a service, it will not look like that.”

During the course of each match, players will unlock cases of different rarity that can be opened to reveal new loadouts for specific Mercs. These loadouts often have different weapons or modifiers attached to them, and cases of a higher rarity will have better loadouts. If you have several loadouts of a specific rarity, you can trade four of them in and pay a small fee of in-game credits in exchange for a loadout of a higher rarity; though based on player feedback during the event, the developers mentioned that they may consider dropping the credits fee at a future date since players are already making a sacrifice by trading in four cases for one.

Each loadout is set in stone for the most part, so you’re not building your own loadout from scratch. But comparing the different loadouts can get overwhelming as you’re presented with icons representing the different guns and modifiers but not a lot of real information beyond that to help you choose what set will be the best for your play style. That’s because the system was only just recently implemented, Alphonso said, and it will get much better over time with more stats to compare so players can make more informed choices.

“It’s totally planned. What you see there is I’d say the skeleton of the system. It’s all pretty recent. Like the last public test, which was pretty recent, doesn’t have that stuff in it. So it has a form of it, honestly, but not in the presentation that you saw today.”

Stern agreed. “It’s functional but it’s kind of fugly. We’re putting more meat on those bones. […] In the current build, I don’t think we’re signalling affordance and opportunity cost particularly well. We’re not doing a good job of that loop, of the flow, of drops and loadouts. Like, the system’s in there and it’s live and it works, but we’re not signalling it very well to players.” 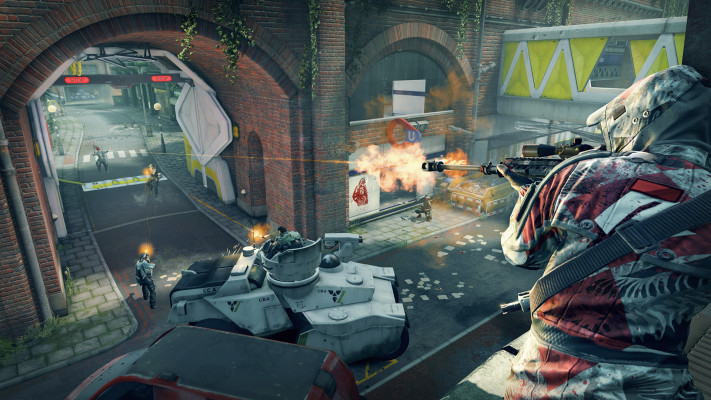 The game also has a parkour system to allow players to wall run, triple jump, and reach higher ground, but it wasn’t available in the build we played. Still, we were told that Dirty Bomb would ultimately have more parkour in it than Brink, Splash Damage’s previous multiplayer shooter that made parkour a very heavy focus of the action.

Matches are 5 vs. 5 and the maps are appropriately sized so nothing gets too chaotic or too sprawling, both design choices Alphonso said were considered from the top down.

“It’s almost like a formula, really,” Alphonso said, mentioning that the developers start by envisioning what they want an ideal match to look like and how long it should take and work from there. “How long do we want people to have to wait to respawn, for instance. We don’t want it to be instant, we don’t want it to be too long, so we settled down on that. And since the characters move quite fast, and that quite literally you can plug that in and [formulate] ‘time to objective by movement speed of character’ and that begins to dictate your scale.