Whatever may have happened in the past, it was bad.  Bad enough for revenge, in fact, and if hundreds of goons stand in the way then revenge will grow from a pile of bodies tall enough to blot out the sun.  RONIN will end with blood on the walls and the floor covered in corpses, but at least they’ll have died with style.

RONIN is a game of 2D free-scrolling stealth action and turn-based combat, which could be confusing (or a SNES-era RPG) but plays like a dream.  You play as a ninja-like warrior in riding leathers and a motorcycle helmet, armed with a sword and lightning-fast reflexes.  Her task is to infiltrate buildings, hack their computers, kill every last security guard on the way to the target, then hop on her motorcycle and escape into the night.  She’s agile, sneaky, and wields her sword like a demon to cut through the heavily-armed bodyguards protecting the old man who’s her goal, but with a bit of planning it will be more than enough. 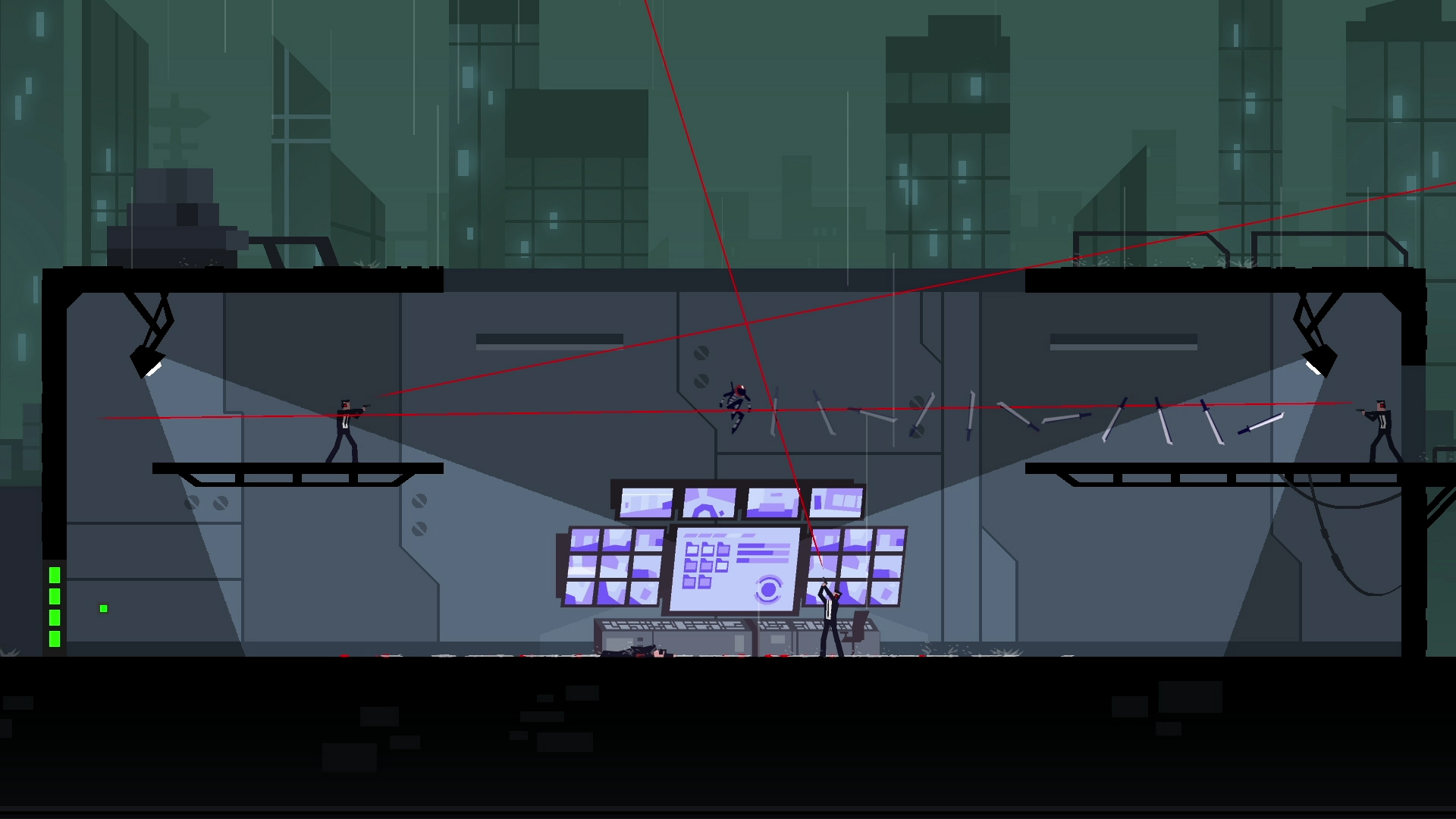 Each level is a building or small series of buildings with rooms patrolled by security personnel guarding the computers with the information you’ll need.  You can climb walls, grapple across the ceiling, or walk everywhere if you don’t mind the light showing your position to everyone.  The parts where you explore the level and plan a clean entry are standard stealth-action gaming, but jumping and any combat outside of a completely undetected stealth kill (where you drop a noose from the ceiling to string up a guard from the rafters) pauses the game so you can move with precision.

Jumping is done with the right stick, pointing it where you want to go while an arcing line shows the path of movement.  While the stick is held down time stops dead, but the second it lets go action resumes either until you reach the end-point of the jump or you hold down the stick again mid-air.  While you can’t double-jump or change direction, you’ve got a grappling hook that’s almost as good.  Jump out a window over a multi-story drop, hold the stick towards the building to attach the hook, then swing into the wall or, better yet, through the window.  With a bit of luck there’s a guard on the other side to send flying. 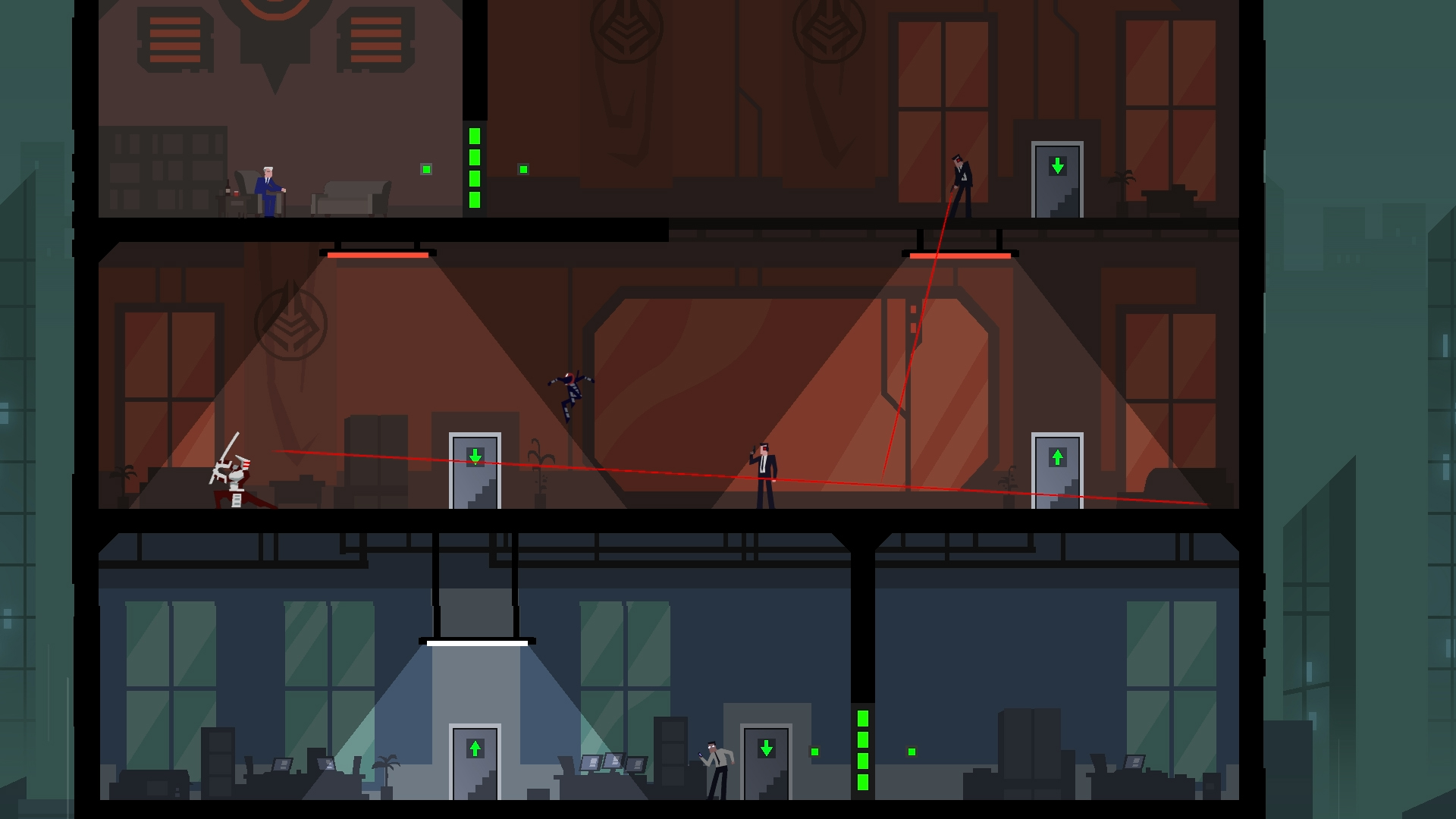 Guards seldom work alone, though, so he’s most likely got a co-worker ready to draw on you.  Once an encounter is initiated the action goes turn-based, with bullet paths and lines of attack showing in a thin red line.  This give you enough information to plan, knowing that most attacks happen after yours.  Got a red line from a guard’s pistol pointed right at you?  Aim a jump towards him to stagger his attack then follow up with a single-stroke kill.  That’s two turns of movement, though, so if another guard has a line on you it’s probably best to pass on the finishing move rather than die taking out a guard.  Like most enemies, you’re either healthy or dead, and there’s no life bar to fall back on.  Even with multiple red lines of attack pointed right at you there’s plenty of time to think before moving, so there’s no point in letting the artificial pressure of imminent death push you towards doing something dumb.  Each move plays out fast and deadly, about one second’s worth of time, and if you need to play defense to get into position before switching to offense and chaining several hits together then that still counts as a win.

The current preview version of RONIN is the first few levels showing off a few beginner enemies and escaping from the first hit.  The pistol-wielding guards are fairly easy but the armored samurai-guys are much harder to deal with.  They take a hit to stun and a second hit to dispatch, unless you get clever with the positioning and send them flying out a window, and their reflexes are fast enough so if you jump straight at them you’ll end up eviscerated.  The machine-gun guards lay down a barrage of firepower you can’t jump through, sectioning the room off into safe and deadly zones, and the radio guards can put the building on lockdown and call in backup if you don’t dispatch them quick.  Some areas are designed for stealth and sneakiness while others drop you into the middle of a number of guards, but with a little care and attention you can sword-dance through every situation leaving the walls dripping with enemy blood-spatter.  RONIN is a fast, sneaky, brutal, elegant, vicious and subtle game of modern ninja action, and there’s going to be blood on the moon by the time motorcycle-woman has slashed her way to revenge.