There are moments in Life is Strange Episode 2: Out of Time where I feel like Dontnod is onto something huge. I’m not necessarily talking about the way its choice-driven narrative is shaping up – though true to their word the studio has thus far shown some satisfying knock-on consequences for actions taken in the last chapter. It’s the ideas behind that story and their execution that impress me most. Dontnod may or may not succeed at changing how games handle choice, but thus far they’ve nailed the first two acts of a coming-of-age story that could rival The Breakfast Club, Freaks and Geeks and Toradora!. At one point Max gives us what could well be the game’s poetic thesis statement: there’s an inherent contradiction in wishing a moment could last forever.

It’s the small moments that really sell the story, and they pass quickly. The episode opens on a black screen with a bleeping alarm and a button prompt marked “snooze,” and no matter how long you let it ring, Max resolutely refuses to get out of bed. When you do hit the button, you’re treated to one of the best opening credits sequences you’ll ever see in a game, backed by alt-J’s “Somthing Good” on Max’s hi-fi. It’s not strictly vital to the experience, but it highlights Jonathan Morali and Sébastien Gaillard’s remarkably effective use of licensed music, not to mention Damien Charbon and Matthew Beaudelin’s eye for shot composition.

It would be painfully ironic if a game so focused on photography was made by people who didn’t know how to frame a shot, but it’s worth noting just how good the camerawork is here. A particularly strong example comes early on when Max is riding the bus: she rests her head against the window while the town zips by behind her, and in the distance we see the lighthouse from her dream – the only still object in the frame aside from her. The game even puts its spiffy post-processing effects to use – before Max wakes up in the intro she’s shot out of focus to convey her grogginess. Quantic Dream’s games are rarely so well-shot, and Telltale can’t even pull off half of these tricks with their engine.

Life is Strange has caught flack for its graphics and especially its animation, and I certainly can’t argue against the latter criticism. Faces are stiff and barely expressive, and the lip-syncing is totally off, although that’s made up for somewhat by how good the rest of the body language is. I’m personally very fond of the hand-painted, “impressionist” textures and the way they play with water effects. In general, the game’s effects are quite impressive, especially the double exposure visuals that accompany the use of Max’s powers and the film burn and melting that occur when they’re abused. 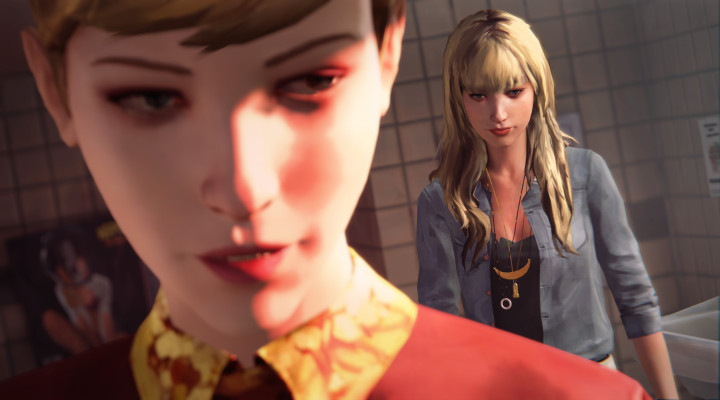 The idea that Max’s powers can “burn out” is central to the episode’s plot. At the end of Chrysalis she revealed her abilities to her old friend Chloe, and she spends a lot this episode showing them off and testing their limits. In the process she suffers headaches and nosebleeds and even passes out. It’s clear that the powers put a strain on her, and she even expresses concerns that they might not be permanent. In a spectacular scene toward the end of the episode she develops a new ability, stopping time entirely and walking through a crowd surrounded by frozen people and birds and raindrops, but shortly thereafter she becomes too exhausted to rewind at all. In that critical moment the choices you make are immutable, and the outcome should you make a mistake has drastic implications for the rest of the season.

The stakes are definitely higher in this episode (there are even a few explosions if you know where to look). The impending storm looms on the horizon, and already the people of Arcadia Bay are discussing portents like last episode’s freak snowfall. Chloe has to be saved from two uncomfortably close calls with a knife and a freight train, and that’s when she’s not busy practicing with a gun to fend off Nathan Prescott. Nathan’s threats against Max escalate to the point that he even breaks into her room to leave a message. Kate, meanwhile, finds her life spiraling out of control thanks to a Steubenville-reminiscent viral video, with the implication that she, like Chloe, may have been drugged by Nathan. These scenes are gripping and well-written enough to impress (with the exception of the train scene, which feels painfully contrived), but again it’s the details that really make the story work. 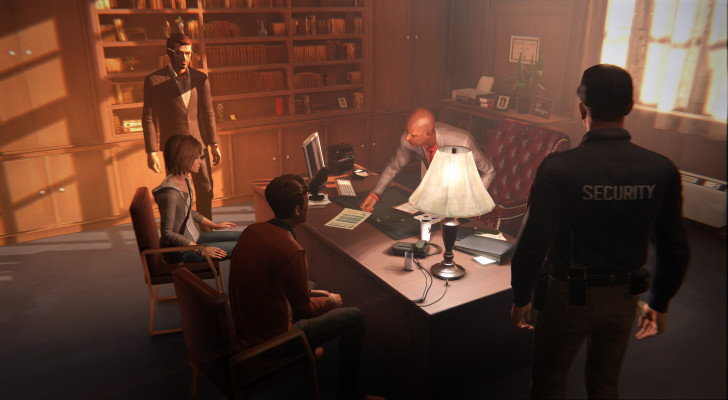 As I said in my last review, the vocabulary and pop-culture references that the game uses are spot on (at least for a pacific northwest high school), but the script has many other strengths. Max’s dialogue changes in subtle ways when she rewinds at certain points, helping to sell the idea that she’s actually travelling back in time instead of just repeating set dialogue trees. Certain choices are dependent on Max snooping and observing her surroundings, though she can also be punished for nosiness so discretion (and frequent rewinding) is advised. The game even uses its collectible photo system to build its world, particularly in one cool moment involving a certain doe.

It’s becoming clear that Life is Strange is a lot larger in scope than its contemporaries. The last episode introduced us to an entire class full of quirky Blackwell students with their own names and personalities, and in this one we meet a number of townsfolk and around the Two Whales Diner. In a game like The Walking Dead or even Dreamfall Chapters these would be little more than props, but Max can observe and speak to every single NPC, gleaning new details about the town and its mysteries in the process. Like Trails in the Sky’s Liberl Kingdom or the cities of Steambot Chronicles, Arcadia Bay is alive and in constant motion, and I expect to see it grow and change with each coming installment. 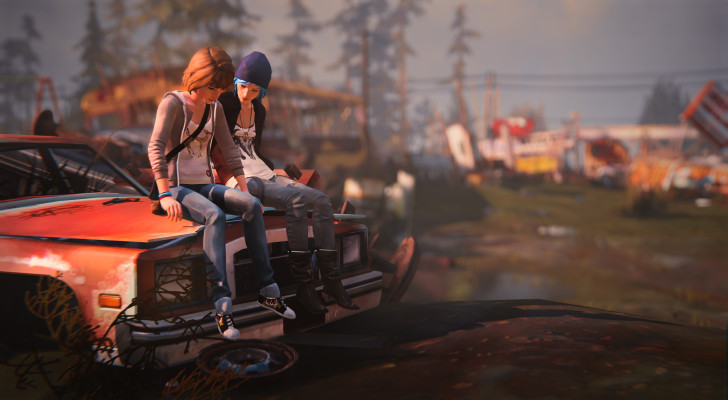 People are going to talk a lot about the big plot points in Life is Strange, and the second episode will give them plenty to dig into. Max and Chloe have some close brushes with death, averted only by Max’s ability to bend time and space, and the ongoing campaign of harassment against Max’s meek religious friend Kate builds to a potentially heartbreaking conclusion. While these big events are well-designed and impactful, however, the game’s heart lies in the small, quiet scenes between them. Through peerless cinematography and sound design, Dontnod imbues everyday moments like waking up or riding the bus with profundity.