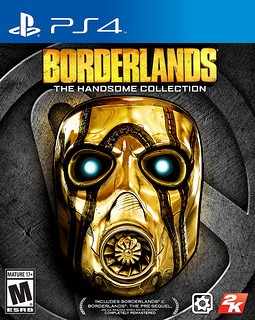 Borderlands remains one of the best new IPs of the previous generation. Its sense of humor, sharp mechanics and billions of different guns helped the series stand out from the competition. Now two adventures, Borderlands 2 and Borderlands: The Pre-Sequel, have been remastered and repackaged for PS4 and Xbox One. With a focus on main antagonist Handsome Jack, Borderlands: The Handsome Collection brings together his story in one complete package with all content ever released for both games, but is there any reason to return to Pandora for a second-dip?

Borderlands: The Handsome Collection is not left wanting for content. Both Borderlands 2 and Borderlands: The Pre-Sequel can last dozens of hours, with that number inflating exponentially with all the packaged DLC. Every single piece of content released for Borderlands 2 is included on the disk and 2K Games was even nice enough to include the Borderlands: The Pre-Sequel Season Pass ensuring more content for the game as it releases. Side campaigns, challenge arenas, character skins and four extra vault hunters (two per game) encompass the extra content included with The Handsome Collection. The amount of content on here is incredible, but there’s nothing new here for those who’ve already purchased Borderlands 2 and all the content, or have The Pre-Sequel’s Season Pass on PS3, Xbox 360 and PC.

2K Games have boasted that Borderlands: The Handsome Collection runs at a native resolution of 1080p and 60 frame per second, which holds true except in certain circumstances. There’s also split-screen support for up to four players, which is more hassle than its worth. Players on PS3 and Xbox 360 can transfer their saves to PS4 and Xbox One, but only if the save files are within the same console family. No Xbox 360 to PS4 transfers, and vice-versa. Strangely, PS Vita owners cannot transfer their Borderlands 2 saves to PS4. 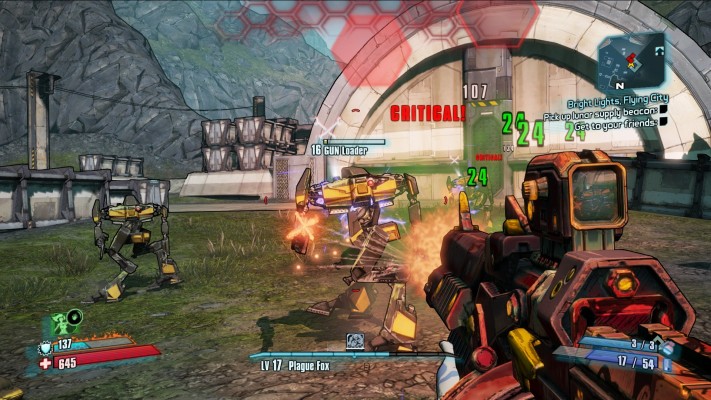 Borderlands 2 transitions to next-gen almost flawlessly. The story of four vault-hunters attempting to overthrow the sadistic Hyperion CEO, Handsome Jack, remains entertaining despite having been told just three years ago. New players will find the dialogue and interplay between the many different character humorous and decidedly different from other modern shooters that tend to take themselves way too seriously.

Borderlands 2’s gear and skill progression systems are still some of the best in the industry. There are literally billions of different guns to collect, and though some may look the same, all guns end up with different stats and effects. An assault rifle with a checkerboard pattern could function like a normal assault rifle and then another with the same pattern could fire grenades. The characters themselves provide the best reason to replay, as each contain three unique skill trees perfectly suited to cause massive mayhem in their own unique way. 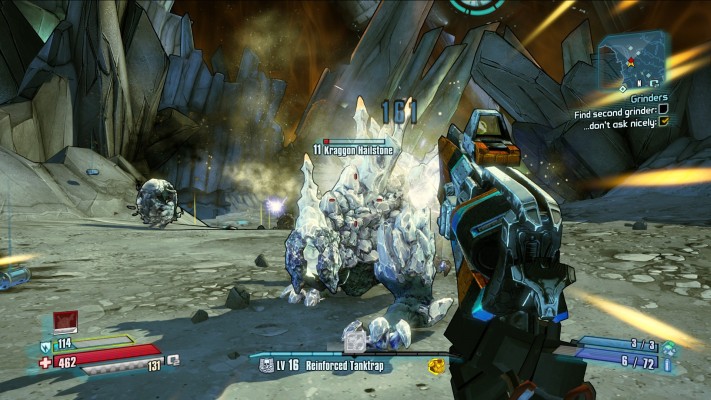 Borderlands: The Pre-Sequel had the most to gain from the console transition, and gained it has. Plagued with bugs and graphical issues at launch, Armature Studios have cleaned it up for launch on PS4 and Xbox One. Though the game still has pacing issues, and the characters aren’t as compelling as those in Borderlands 2, The Pre-Sequel is still a fun adventure that earns praise for adding fun, new gameplay mechanics. Borderlands: The Pre-Sequel follows Handsome Jack’s rise from lowly Hyperion programmer to CEO and dictator of Pandora. Taking place on Pandora’s moon Elpis, The Pre-Sequel takes full advantage of its setting to offer a unique gameplay experience.

Survival depends on Oz Kits, which provide vault hunters and enemies with ample supplies of oxygen while traversing the moon. Oxygen is more than just a survival mechanic (Claptrap is the only character who doesn’t need Oxygen to survive), but also a gameplay mechanic. Vault hunters can tap into their oxygen reserves to jump higher or plummet to the ground to cause massive damage to surrounding enemies. Destroying an enemy’s helmet with a carefully placed headshot will cause them to lose health over time as they scramble to survive without oxygen. Oxygen management is rarely ever an issue as enemies drop ample supplies, and there are ample amounts of O2 stations on the map. The Pre-Sequel also gets bonus points for introducing new weapon types. Lasers, Railguns and Cryo weapons add more variety to a game already exploding with variety. 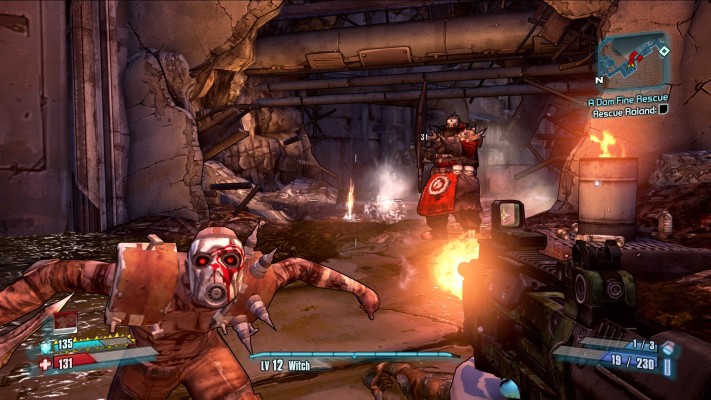 Though Borderlands: The Handsome Collection is on next-gen consoles, the collection does suffer from last-gen issues. For one, once a game has been booted there’s no way to switch to the other. Players will have to shut down the entire game and reboot. A minor inconvenience, but if other Remasters can avoid this, Borderlands should be able to as well. Both games suffer from minor to severe texture pop-in, a problem present in previous versions of the game. While it may not be possible to completely get rid of pop-in, it would have been nice to see it minimized.

Borderlands has always looked great thanks to its cel-shaded art style. The textures, colors and black lines look crisp, and it’s fair to say that the games look on par with their PC versions. There’s a difference between the PS3/Xbox 360 versions and the PS4/Xbox One versions, though it can be hard to pinpoint that difference when the game is in motion. Even with the crisper colors and textures, Borderlands 2 and Borderlands: The Pre-Sequel are still last-gen games and were designed for last-gen consoles so the graphics aren’t going to blow anyone away. 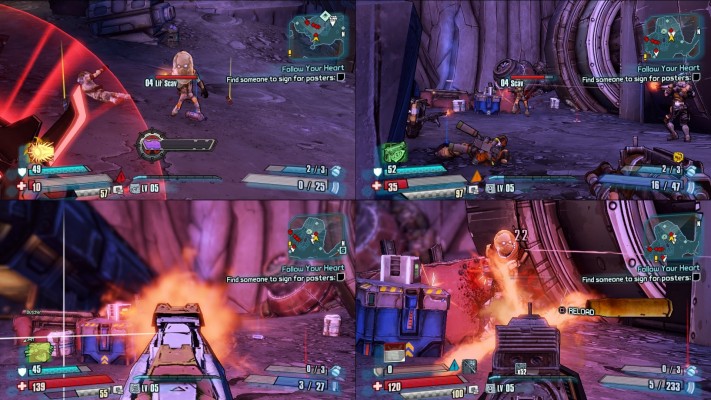 Both games, The Pre-Sequel in particular, do suffer from inconsistent performances. Borderlands 2, for the most part, runs at a smooth 60fps. The frame does occasionally drop in large areas with tons of action, but it never takes a huge plunge. It’s the four-player split-screen that takes causes the framerate to plunge. However, it’s never as bad as The Pre-Sequel.

Borderlands: The Pre-Sequel manages to maintain a solid framerate close to 60fps when in single player, or playing online. There are a few noticeable plunges when in big areas filled with heavy combat. Much like Borderlands 2, it’s the split-screen that causes the issues. The framerate is halved to 30, and at times falls below that. Playing split-screen can still be fun, but it’s clear that both games needed more optimization to improve the experience. 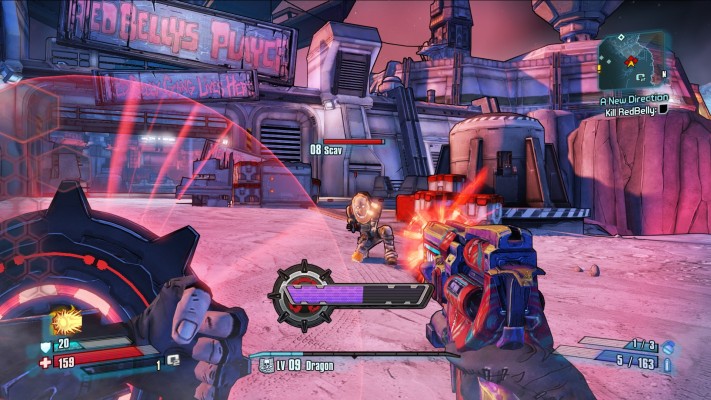