Spotify has become the go-to streaming service when it comes to music. What Netflix does for movies, Spotify does for music. Even alongside competitors like Pandora and Google Play, Spotify has evolved from a simple experiment to an enormous success, integrating into countless social networks and snagging once-impenetrable record contracts from iconic bands. Spotify’s integration with PlayStation Music has given PS4 owners full access to the Spotify catalog of music, and a downloadable app on the PS Store makes using the service quick and easy. But is this application of streaming music a worthwhile use of your PS4’s hard drive space?

I like to call myself an audiophile. When I’m not playing games, I’m usually listening to music, so my excitement for an integrated Spotify app for Playstation 4 was met with baited breath. After a quick download from the PS4 home screen, I logged into my account and checked out the app’s interface. The first thing I was greeted with was some recommended playlists. Navigating the screen with my DualShock 4 offers new music and specific genres (presented in inconvenient tiles instead of lists), but moving up in the screen to “Your Music” was where I could access my own custom playlists and saved songs. Of course, navigating with a controller has its deficiencies, but this are the same interface limitations held by any other app on the console and they’re easily managed. Accessing most of the music through Spotify on PS4 requires the search function, which is fast, but there still could’ve been an easier way to access a specific track beyond using a cumbersome on-screen keyboard. You can also access free accounts with ads playing or upgrade to a paid account, just like on the desktop program. 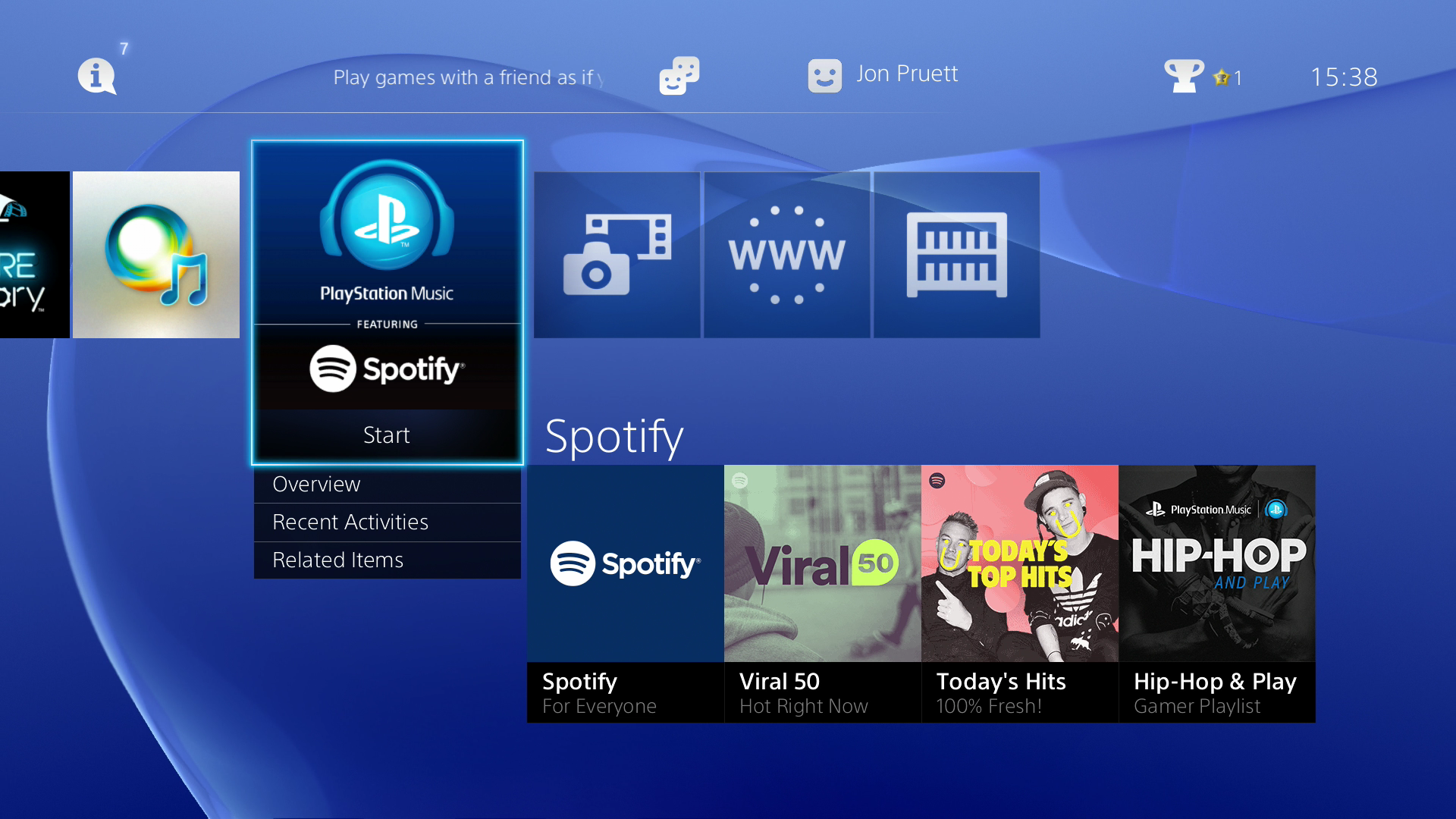 Within the app, you can play both single songs and playlists. Shuffle, repeat and save options are available, along with high-quality album art, but I noticed a lack of any sort of visualization option, a staple for so many media players on PC, consoles and beyond. The album art is nice, but this could’ve offered some great atmosphere for parties. This is made worse by the album art’s total lack of animation. Stagnant album art just doesn’t scream “action,” regardless of what kind of music you listen to. Spotify on PS4 was clearly not meant to be a singular app.

Which brings us to the next big deal: being able to use Spotify while in a game. I tried multiple titles on PS4 to see how the sound quality and performance matched up, and overall, it’s more than solid. You can adjust the volume, skip tracks and pause songs by holding the PS button and going to the quick menu. None of the games I played had any sort of decrease in performance while Spotify was running, but song volume stayed consistent throughout the entire game. I recall when playing MP3 tracks on my Xbox 360 back in the day that some games would decrease media player volume during cutscenes, a convenient feature to keep players from missing cinematic moments. Spotify, being an independent app, doesn’t have that feature. I’m not entirely sure if it ever will, though, as it’d depend both on Spotify itself and what developers decide to compensate for the app (which, to my assumption, won’t be many at all). 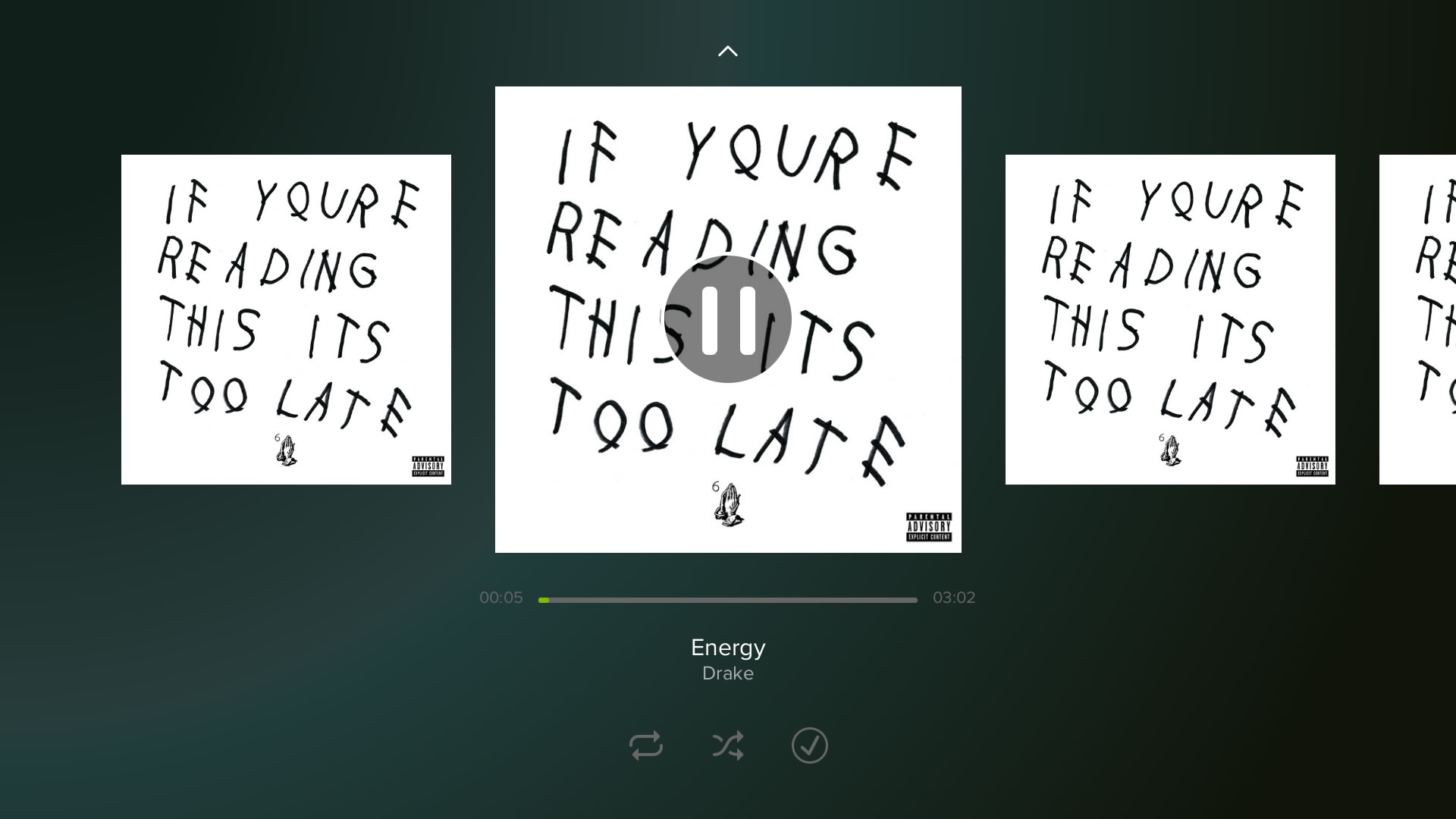 Its interface is barebones and doesn’t do much for the party atmosphere, but for any gamer who wants to jam to tracks while playing the newest game, Spotify is a remarkably seamless application. It’s not intrusive and functions quite well during gameplay, though having to handle volume manually can be a bit tedious. It’s a small price to pay, however, to access all the music you could want, straight from your PS4. It’s been a long time since I’ve been able to say that a console has a fully integrated music player that works this well. For audiophile gamers, this is a must.