Is there anything a spider tank can’t do?  From Ghost in the Shell on PS1 to the wall-crawling critter being added to Earth Defense Force 4.1, spider tanks are the best tanks, and now Rive is adding to their winning streak its little crawler.  You get to pilot a six-legged beastie armed with unlimited firepower, a variety of secondary weapons to scavenge along the way, and the ability to hack enemies to work on your side.  Mostly it’s about the unlimited firepower, though, because the enemies attack in swarms and it only takes a single hit to break your score multiplier.  Rive is a side-scrolling score-chasing bot-smashing action-fest set in the ruined hulk of a mysterious giant spaceship, and you get to shoot your way from one end to the other.

While the single-level demo is light on plot, it’s filled with solid shooting action.  Your spider-tank can’t walk on walls but it does have full 360 degree shooting using twin-stick aiming, which is pretty handy when a swarm of drones drops from the ceiling into your face.  The tank can also double-jump, and while it can swim its gun doesn’t work right in water.  The demo also has two special weapons available.  The homing missile shoots out a swarm that does a nice job of thinning the crowd, nothing super-fancy but it gets the job done.  The EMP grenade, on the other hand, creates a circular zone of circuit-frying trouble that knocks out any enemy that flies through it, and does a nice job of stunning bosses as well.  Got a pair of drone-swarms closing in from either side?  Toss an EMP grenade where their paths intersect and clean up the bodies as they fall.  It’s a great way to rack up the multiplier. 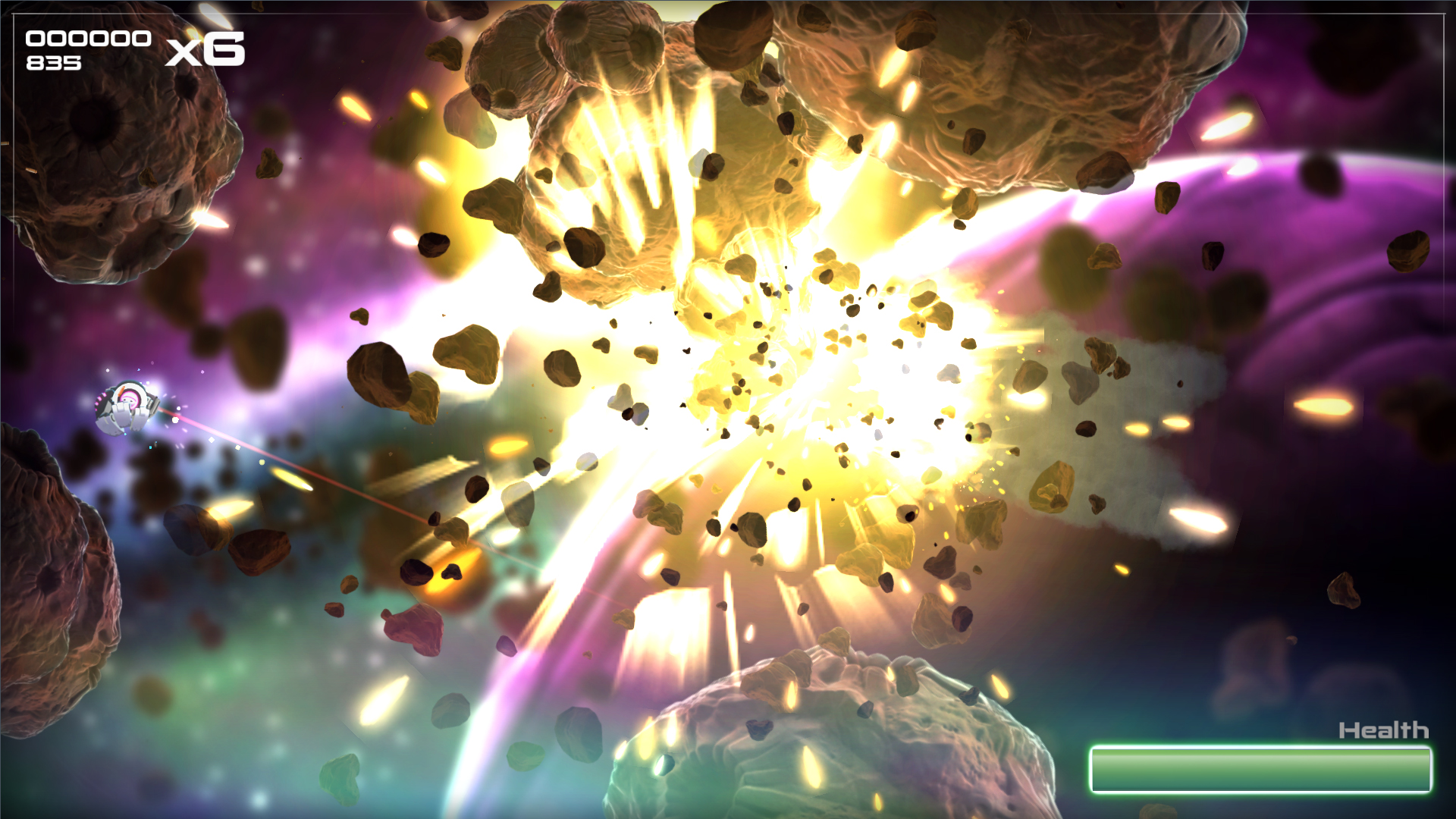 The final ability is only touched on lightly in the demo, and that’s hacking.  Each big green canister grants a new ability to subvert a different enemy into an ally, and while two of the three hacks you pick up do exactly as expected, the third is the kind of pleasant surprise I’m hoping the full game has more of.  Hack a door?  It opens.  Hack a heal-bot?  It heals you.  Hack a drone?  I’ve got to admit, I didn’t see that coming.  The drone throws out a circular field that lets you fly, so long as you don’t accidentally shoot it down while defending yourself from other hazards.  Unfortunately it’s also the last thing you see in the demo before it ends, but it’s exactly the kind of twist that makes me want to see what other abilities might be hiding in the robotic enemies infesting the derelict spaceship.

Once the demo is over it tallies up your score, and Rive is the kind of game where you can always find a way to do better.  Each enemy you kill and background prop you break adds +1 to the multiplier, up to x20, and part of the key to scoring is keeping the multiplier alive.  Taking a hit resets it to zero, as does not shooting anything for too long, and the final score of a level also takes the kill-chain into account.  Enemies drop little white orbs that add to the score and there’s another post-level multiplier for the number you collect, and completion time is scored as well.  So, to really rip open the scoring, you need to shoot lots of enemies, keep the chain alive, don’t get hit, rush like mad, try to ensure at least the mid-boss dies on an x20 multiplier, gather all the orbs you can while letting go of the ones too far away to collect to keep the multiplier from timing out, and save a few background props on the end-of-level boss for just before he dies so you can crank the multiplier up.  Do all that and it’s the difference between a lowly 700,000 score and my current best of 1,943,224. 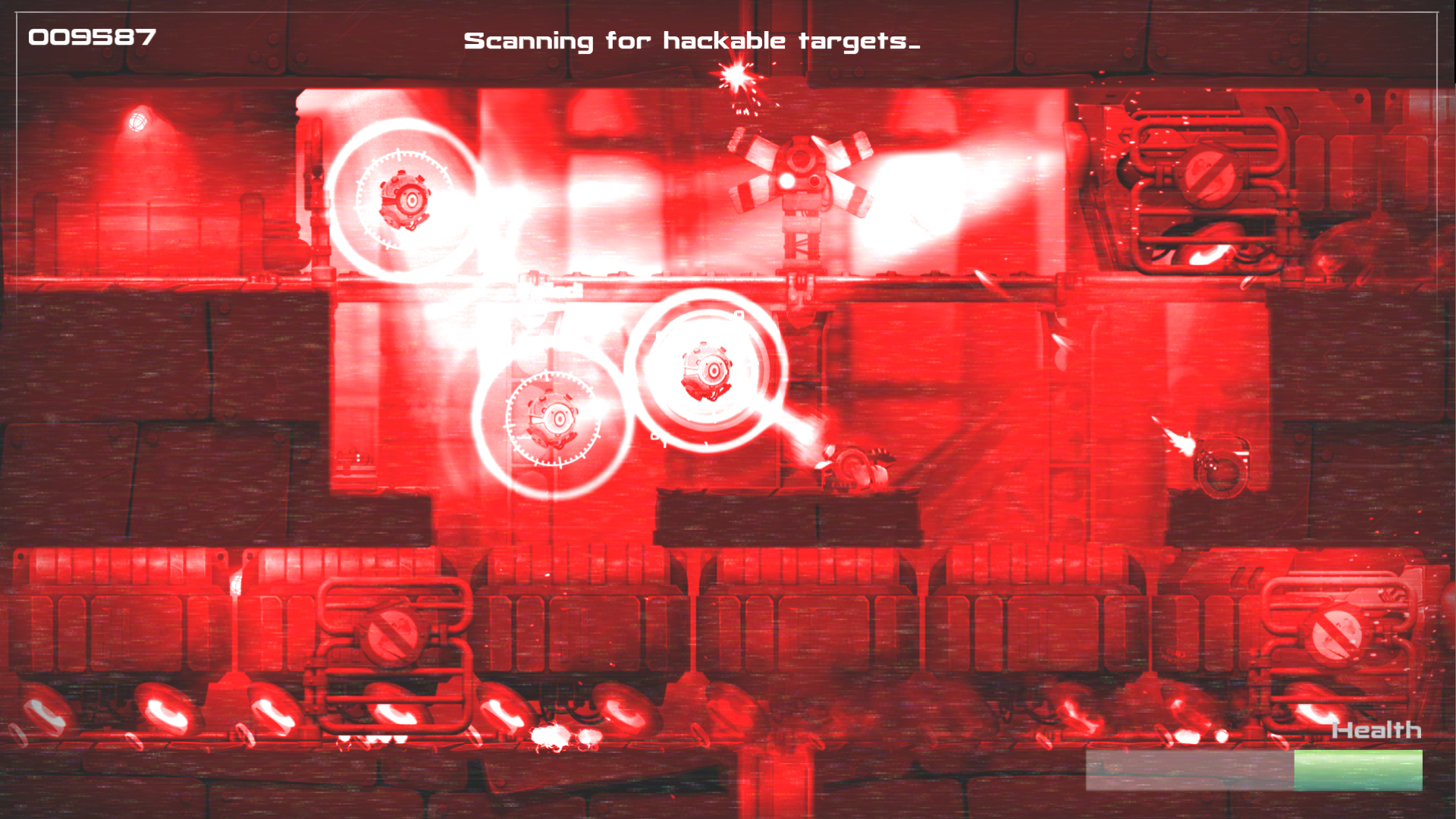 Lock the scanner onto a target and the world goes into slow-mo while you hack yourself a new friend.

If it isn’t obvious, I’ve been seriously enjoying Rive even in its limited demo state.  The shooting feels fantastic and hits with a solid punch, there’s plenty of room for experimentation in maxing out the score, and while there’s no randomization to the level, it remains highly replayable just because it’s so much fun.  It probably doesn’t hurt that Rive looks amazing too, with plenty of explosions and color in what could have been a dark and dreary spaceship carcass.  Rive has the feel of a lost Genesis shooter, all 16-bit action with a fully modern presentation, and if the rest of the game can match the earliest sections, then it’s going to do a fantastic job of turning heads when it launches later this year.