The difference between a mercenary and a hero is that, while both of them may save the day, the mercenary needs cash up front.  Doug McGrave is a demon hunter, and practically the picture-perfect ideal of a hero.  Tall, wide as a house, strong as the sun, all levels maxed and gear the best a lifetime of experience can offer.  He’s also a bit of a mercenary dick.  When McGrave refuses to help a demon-infested town he’s cursed for his dickishness, and now he’s lost everything but his size and strength.  Stuck at level 1, all money vanishes the second he touches it, all weapons soon break, all experience drains unless he’s actively doing good, Doug McGrave is a shadow of his former jerky self.  If he wants to break the curse (and he really, really wants to get back to making cold, hard cash as quick as possible) he’s going to have to help the town like a proper hero would.

Except it’s not quite that easy, because the curse is always nipping at his heels.  He can’t pick up money so the town is willing to help him in exchange for monster goop, using it to weaken aspects of his curse.  There’s a lot to buy even if McGrave can’t actually keep any weapons or inventory, and every single bit of it ties in to freeing the town from its monster problem. 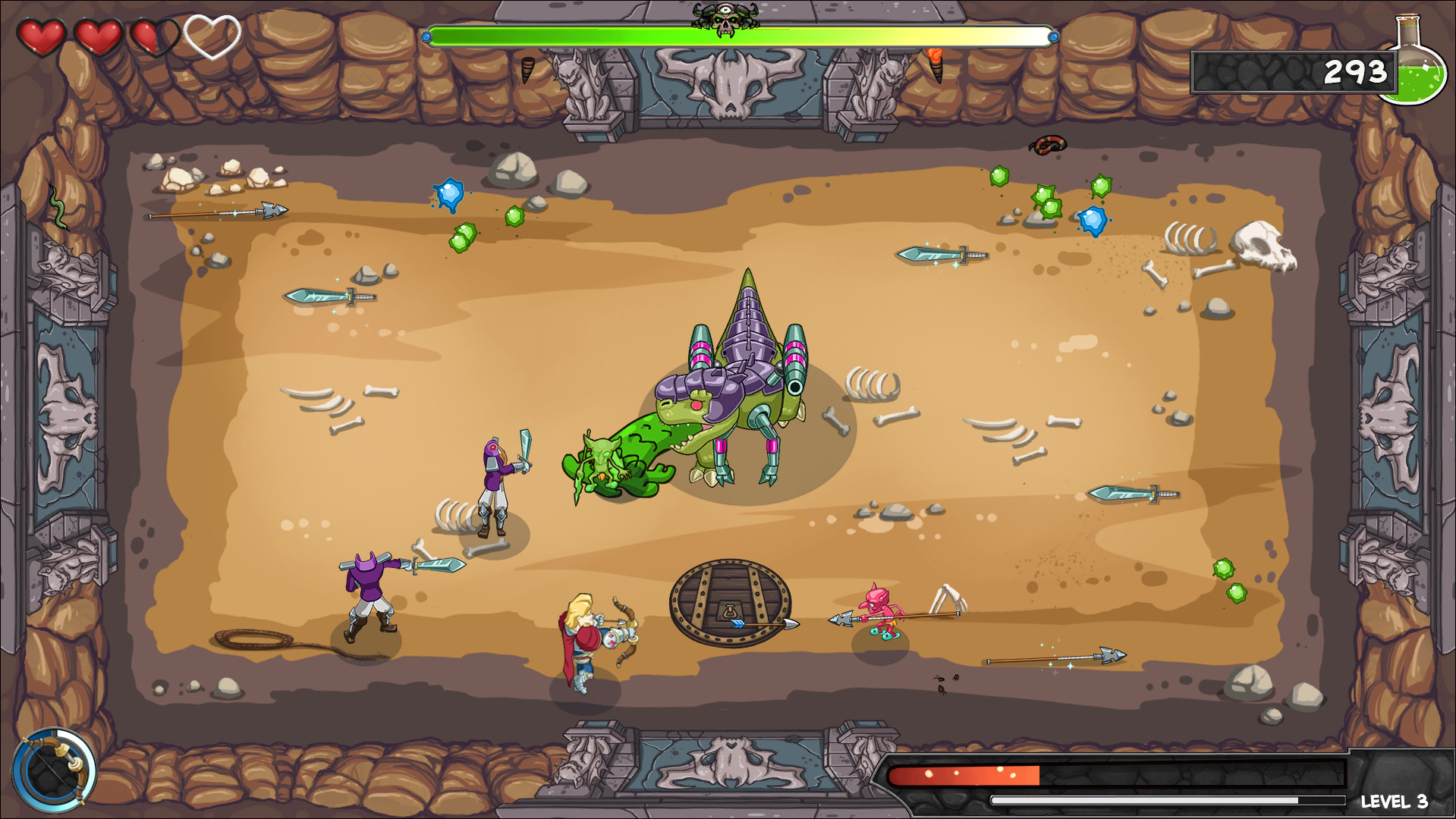 The first time you go into the dungeon will be a fairly short-lived excursion.  Armed only with his fists, McGrave isn’t particularly powerful until he takes out a monster or two and gets the weapon-drop.  Not every defeated monster drops a weapon, but it happens often enough that there’s usually several kicking around each single-screen arena to replace the one you’re using when it breaks.  Each monster uses a specific weapons, such as imps with spears, knights with swords, tree ents for some reason carrying slinghots, and lion tamers dropping whips.  While the current demo version only goes through up to the second boss, the weapons get weirder as you go and the monsters are, to put it bluntly, thematically discordant.  Elves with bows?  Yep.  Gangsters with machine guns?  Them too.  Psychos with chainsaws?  Sure, why not?  The Weaponographist is not a game that takes itself particularly seriously, and if an enemy adds to the variety of weapons and toys McGrave can find on his quest to get away from this town then it’s more than welcome to find a home in the dungeon.

As McGrave takes out enemies they drop not only weapons but goop, and he’ll be needing as much as he can earn to be able to survive.  When you first find a weapon you’re ability with it is level 1, but spending goop in town means you level up base proficiency, making it more powerful.  Goop can also be spent to enable special item drops like speed or invulnerability, weaken specific aspect of the curse to get more health or make all weapons more durable, and level up the special one-shot weapons the rarer monsters drop.  The eight-way octopus shot or ultra-powerful tuba blast are much more helpful once you’ve invested some goop into their abilities, but all skills and upgrades are capped by how far into the dungeon you’ve gone. 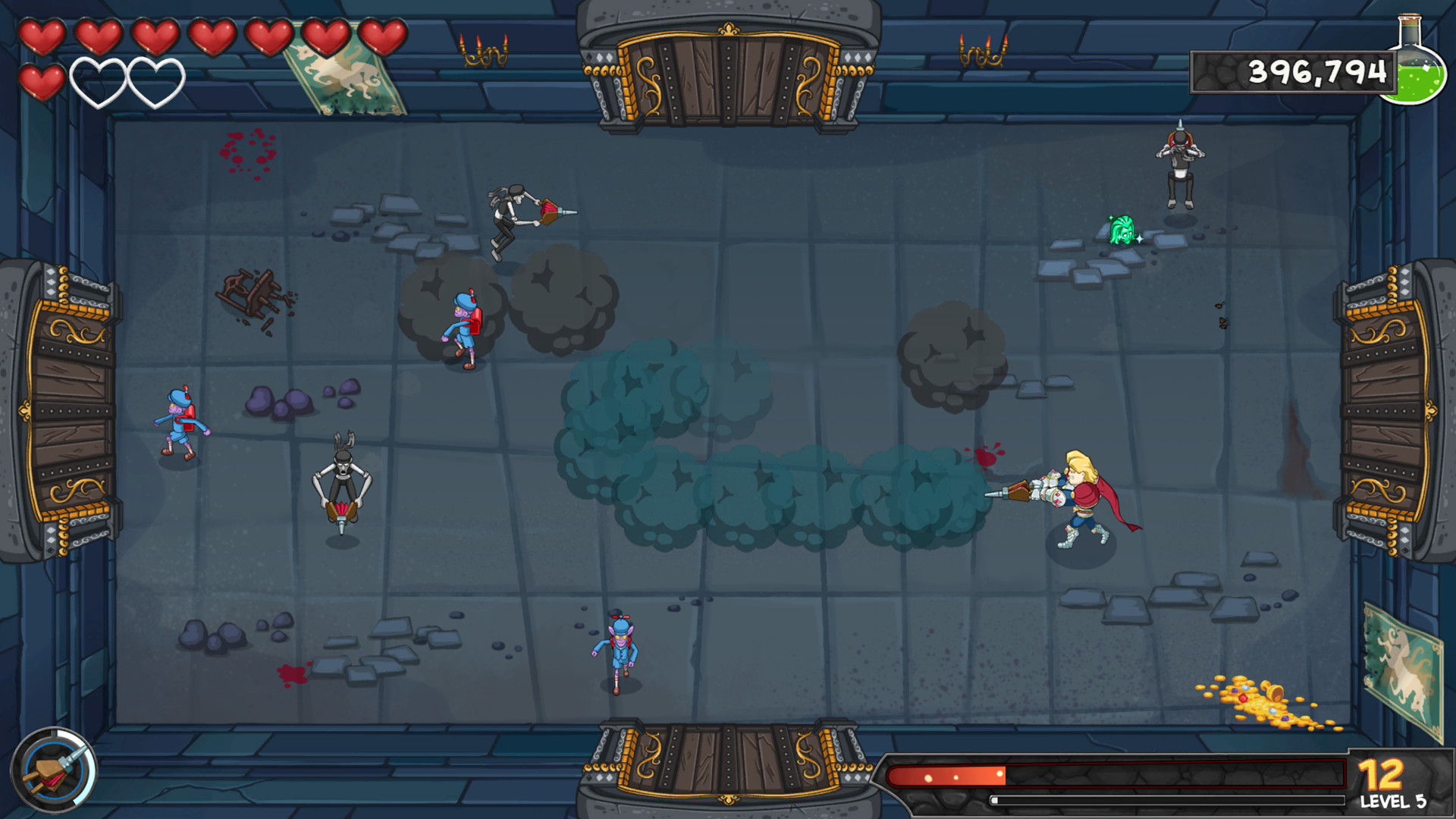 To make matters a bit trickier, every moment McGrave isn’t doing good sees his experience drain, which means you need to keep killing monsters as fast as possible to keep your level up.  Starting at the beginning of a floor sees you at level 1, and killing monsters fills up a combo bar that slowly drains if you slow down.  Reaching level 4 is nice but you’ll need to work to keep it, because it doesn’t take long for that bar to start draining experience away if you aren’t efficient.  Fortunately the experience-drain pauses for a few seconds once each room is cleared, which is useful for grabbing a fresh weapon and gathering up any remaining goop before heading into the next area.  The curse is harsh but it’s not completely unreasonable.

At its heart, the Weaponographist is a twin-stick roguelike that doesn’t actually use both sticks.  Because each weapon breaks with too much use it wouldn’t be a good idea to constantly attack by leaning on the right-stick, so the face buttons take over instead.  This does mean that McGrave can only attack in four directions, but it works out fine in practice.  So far I haven’t seen more than six or so enemies on screen at once, so you don’t really need the perfect arc of firepower you’d find in a more crowded game like Geometry Wars.  Grab a weapon, line up the attack and clear that dungeon!  You’re Doug McGrave, formerly a demon hunter and now The Weaponographist, and if you can’t hold on to a weapon for long then at least there’s an infinite supply in types ranging from standard to utterly bizarre to get killing with.