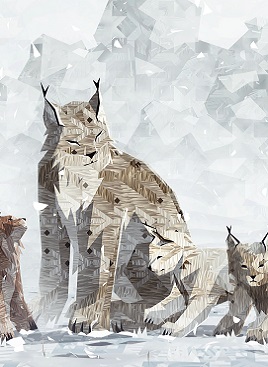 Before you read about why Shelter 2 sits comfortably between Gone Home (a highly praised and beloved letter reading simulator) and Bubsy 3D (the embarrassing death of a mildly memorable and somewhat likable character) on the quality videogame spectrum, there’s something you should know: it’s an incredible idea.

Truth be told, what constitutes as experimental nowadays barely toes the line, and few games are capable of delivering emotionally charging experiences without pages of needless exposition. So while the supersaturated survival genre brainlessly loops and profits with predictability, Shelter 2 is the paradigm shift, blurring the barriers and injecting the sort of sentimental sensations typical of visual novels or painfully awkward family reunions. Unfortunately, that escape from tradition is mostly whispered, leaving too many stones unturned and stories untold.

Like its predecessor, Shelter 2 is part survival game, part animal simulator, part adventure, part crash-course in motherhood (and if the woman’s shelter in Las Vegas is any indication, being a single mother is tough). Players explore the world as a wild lynx (badger in the original, less violent and more focused), feed and raise their young, rinse and repeat through a nifty family tree system that, to an extent, makes replaying the game interesting for those with an active imagination.

In substance, the in-between activities matter most; surviving frosty winters without losing cubs to hunger, protecting your squalling progeny from unfamiliar growls in the distance, forming an unexpected emotional bond with your quilted brood and feeling depleted when your curiosity results in death. There’s something to be said about Shelter’s in-your-face lessons on the cycle of life, shedding perspective on nature through a colorful lens, but the game doesn’t really spotlight its strengths. Instead, and in spite of a concept that under different circumstances could have been a game-changer, Shelter 2 never makes the impression its concept demands. And the outcome, sadly, feels all too much like a lengthy tutorial.

This time around, there’s a sprawling world to tackle any way you choose, and when it finally opens up and you’re free to roam its decorated fields, waterfronts and patchy hillsides, a painful linearity sets in. Exploration, while encouraged by a gorgeous and vast landscape, is equally discouraged by the incessant wails of hungry cubs. It didn’t take me long to realize that straying too far from the convenience of the den-side rabbit buffet doesn’t bode well for the little ones, and with limited stamina and my own starvation to worry about, I found it best to spend the first chunk of the game as close to home as possible.

As a caretaker of newborns, hunting (and walking — lots and lots of walking) is the name of the game. Small prey, which scatter when approached, are easy enough to snatch. You’ll rarely chase a tasty rabbit for more than a handful of seconds before another appears in the background, and their movement patterns aren’t too complex. Larger animals, such as deer, require a leaping attack. And while they’re just as easy to grab, they’re infinitely more fun to chase down. The only real challenge is that, in its openness, it’s often tricky to locate particularly meaty areas, and exploring too far from the den can result in the loss of cubs. You can sniff around, searching for — and eventually discovering — new areas, but ultimately the goal remains the same: find food, making its open world a lot like a playground without swings, slides of seesaws.

Thankfully, rabbit meat in Shelter’s slice of wilderness is infused with enough steroids to turn adorable meows into anxious snarls in a matter of minutes (which is good considering the games wickedly short runtime — about 2 hours). Once the kittens are grown enough to sample the hunting grounds, expanding the field of comfort is fine. Cubs will pounce on critters and feed themselves just enough to calm the stress of rushing back and forth between the field and den, but by then the game’s only compelling mechanic (successfully leaping onto an unsuspecting deer) has been exhausted.

The problem is that things in Shelter 2 are simple to a fault, and feeding your cubs involves only a few simple mechanics that teeter between survival and boredom. As mother lynx, players can walk, sprint, jump and, when moving through certain patches of shrubbery, sneak. The only goal, as was in the original Shelter, is to find and and deliver food to your young; a woefully basic objective that’s emphasized by the content-parched open world.

Whereas some games try too hard to offer something compelling (see The Order: 1886), Shelter 2 doesn’t do enough to pepper its fundamentals making it an emotionally engaging but grievously mismanaged idea, hitting its only note repeatedly like an attention-thirsty grassroots guitarist. And wolves, introduced in the games opening moments and the would-be captivating cherry on Shelter’s sundae of food-chain dominance, aren’t as large a threat as the intro would have you believe. You’ll encounter them once or twice per playthrough, and you’ll probably lose a cub or two in the process, but it’s all very predictable.

The world is perhaps Shelter’s most impressive asset, water-colored and beautiful with rapidly changing seasons and interesting flora. However, it’s all very superficial. Watching the world shift from frosty and wintry whites to lush and vibrant greens is a joy, but outside of a Kodak moment or two, exploration is unrewarding. Although it’s mostly a backdrop, it stands out and secures Shelter 2’s spot as indie eye-candy contender, coupled with a beautiful string-heavy soundtrack that accompanies its watercolored tones harmoniously.

Shelter 2 isn’t a great game, but few games charge players with wrestling genuine emotion or real-world struggle, and in general the medium hardly demonstrates or encourages such circumstances. There’s no complex mechanic or grand story to work through, but there’s none that could easily capture “feelings” either. Ostensibly, Shelter 2 is as basic as the genre allows, and it’s certainly a minefield of imperfections, but for those with heart and appreciation for even the basest of human connection, there’s a succinct — if brief — journey of incredible magnitude, touched by an artful brush and hurt only by its lack of drive. Shelter 2 fails to deliver what its concept promises, but it remains an enjoyable adventure that doesn’t overstay its welcome.