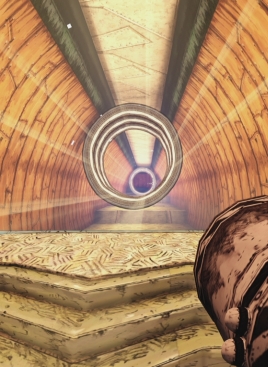 Tower of Guns first landed on PC one year ago, since then gaining a ton of acclaim for being a highly-polished FPS/roguelike hybrid. Tower of Guns throws you for a loop with every play session because you know exactly what to expect. The level designs are largely randomized, and the plot setup for every game is different. Enemy placement varies as does your loadout if you’ve had a good run before. Buying permanent items takes time, and you’ll need to be on your A game to succeed.

Much like Rogue Legacy, sometimes you’re just doomed to fail. If you go in with a pea shooter, you might wind up with a game where you’re in bullet hell right away. Conversely, you may luck out and be dropped right into a bonus stage. One of the more amusing scenarios uses the game’s developer as your narrator, so you get a makeshift commentary track in text form throughout the game. It may seem a bit odd, but the goofy storylines wind up being one motivator to keep doing well. Sure, you’ll eventually get that same circumstance again, but if you’re in the zone, you don’t want it to end.

This game is designed to end your life as soon as possible. It starts off innocently enough with a basic tutorial-style section that lets you get used to the controls and get a handle on your weapon. Each gun works differently, with some having a spreadshot that you need to focus to do the most amount of damage, while others may have a faster fire rate, but do less damage and a slower weapon can take down most things with one shot, but you need to be patient for its payload to land. Each weapon has its own pros and cons, and unlike most FPSes, this doesn’t have any melee attacks.

This results in a harder experience than one might expect because you’ll frequently find yourself in close quarters to turrets that you instinctively would normally take out with a melee attack. However, since your guns have unlimited ammo, this isn’t much of an issue. It just requires you to retrain your FPS brain a bit and approach this more like a shoot-em-up. Since it’s an FPS, it would natural to kind of view it like a twin-stick shooter — but one with a heavy bullet hell mechanic and a lot of traps. The ever-changing nature of some of the environments puts a bit of a puzzle element into the game and adds a sizable amount of difficulty. 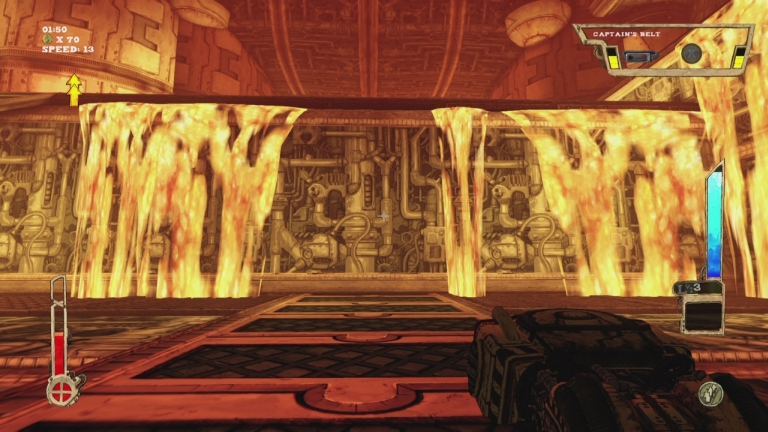 While the normal constant barrage of gunfire makes things hard, having the floor you’re on suddenly become a wall and then you need to figure out how to navigate the pseudo-underground portion to get back up makes your basic task that much harder. In theory, all you need to do is enter a room and then reach its exit and blast the door open ala Metroid. It might be tempting to breeze through, but doing so will prevent you from finding secret areas full of goodies. You might find a temporary buff, or even something that can be used forever – like a new weapon. Basic bullets on a door tell you that another room with hazards awaits, while a skull lets you know that a boss battle is forthcoming.

You’ll want to do your best to armor up because there isn’t any real grinding here – what you’ve got to fight with against a boss might be too much or very likely, could be not enough to even damage its underlings. Boss battles are also randomized to some degree. There aren’t an endless amount of them, but you don’t know which ones you’ll face before you enter the room. 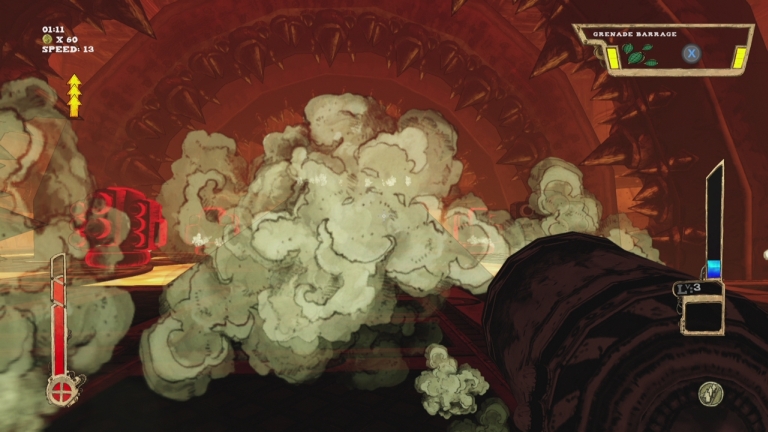 Some boss battles are hard, while others become an absolute breeze with a spreadshot. That weapon sometimes feels a bit like having just the right Mega Man robot master item equipped because if you land a shot flush, you can kill a boss in around a dozen or so hits. It may be beyond that to some degree, but compared to other weapons, it can cut through nearly anything and take out a group of smaller enemies fairly quickly too if you don’t dissipate the shot too much and nail everyone with a good-sized chunk of the blast. Tower of Guns will kick your ass and you’ll die a ton, but never due to the controls. RT works fine as your trigger, while the left and right sticks control movement and the camera as well as can be expected. A acts as a jump and if you’ve got a lot of jumping upgrades, you can really cut through some of the level layouts fairly easily.

Visually, Tower of Guns is among the better-looking shooters on the market. While it is just an independent game, it lacks the muddy up-close textures that hurt Titanfall. The partial cel shading ala Borderlands works nicely here and gives the weapons and environments a level of detail that would otherwise be lacking. Explosions remain impressive thanks to all of the mushroom clouds that pop up. Even if you just destroy a small enemy, it feels like an accomplishment because of everything that blows up as a result. 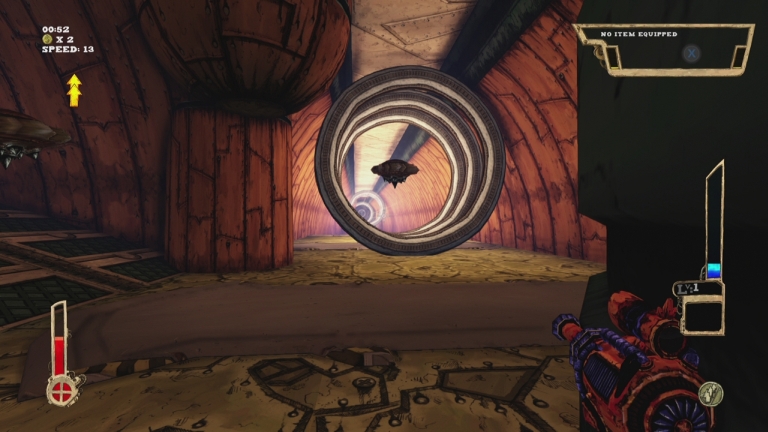 Tower of Guns does have some visual oddities from time to time. Occasionally, parts of the world will clip into one another — like a section of rings that goes into the Earth beneath it, but not in a way that looks correct to the eye. It doesn’t appear to be built that way by design, just rendered that way. While the environments are fairly small, they are beautiful to look at with some art deco designs at times and industrial designs mixed in as well. You never know quite what to expect from the game’s graphics, but you can always expect them to be impressive. The only visual failing is the game’s text, which is far too small and hard to read. This goes for both HUD elements and the story descriptions and that makes this slightly less friendly for anyone with a vision problem despite enemies, weapons, and items being fairly large.

The game’s audio really instills a sense of fear in you. At all times, you’ll hear explosions going off all around you. If you’re stuck in a mechanical puzzle, then you’ll hear things like columns raising and lowering around you. While this is meant to give you some clues as to what to do next with the timing, it also builds up fear since it’s yet another thing going on during a time of panic. The soundtrack is intense and goes for a more electronic vibe with some rock mixed in. Chiptune music is thrown in from time to time and it fits the game’s more intense sections nicely since that music style has come to define NES-hard gamesplay and this is very much a modern-day incarnation of that style. 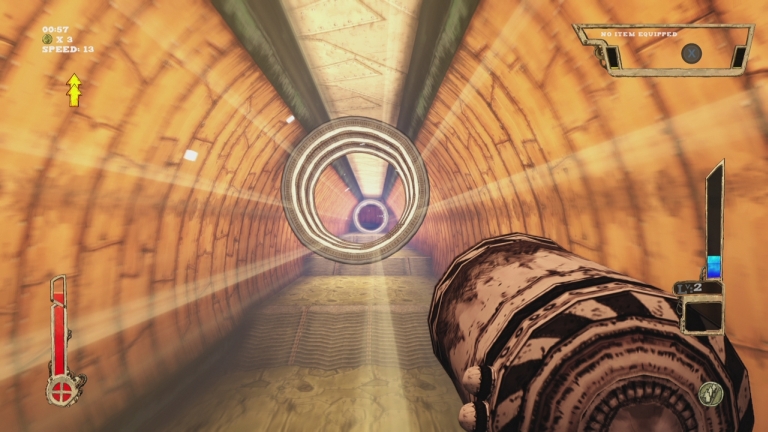 Tower of Guns is a brilliantly-crafted game that is seemingly forged from the tears of the players who fall to its traps. Gunfire will come your way from every direction, while platforming perils send you to do your death thanks to massive fall damage totals. You’ll get excited, but rarely angry. The game’s difficulty is extreme, but doesn’t get to the point where you want to rage-quit. Failure is a complete learning experience — even if you’re handicapped to such a degree by the default setup that it seems like you’re going into a sword fight with a blindfold and your hands tied behind your back. If you want a tough game, give this a shot — you won’t regret it. It’s a fun game that rises above any frustrations it may cause to create a memorable experience.