Super Indie Karts hit Kickstarter and raised the bar when it came to keeping backers informed of the game’s progress. Backers at a certain level got beta codes for it and the public could gain access for $30. Our preview is based on the beta version which enables you to play through three different cups and use every character. The roster is one of the most impressive in a kart racer because of just how many indie franchises it uses, while its art style evokes the original Super Mario Kart with many modern flourishes.

Kart racers have been done to death over the past 25 years, but after the oversaturation of the genre in the PS1 era, it’s really been whittled down. Now there’s Mario Kart and Sega’s Sonic All-Stars Racing and that’s about it. The Crash franchise is dormant and there won’t be anything done with the Diddy Kong Racing franchise either when Nintendo can just throw the characters in Mario Kart. This leaves the genre largely stagnant, but now, Super Indie Karts is on pace to change that with a really well-crafted game that impresses even at this relatively early point in its lifespan. 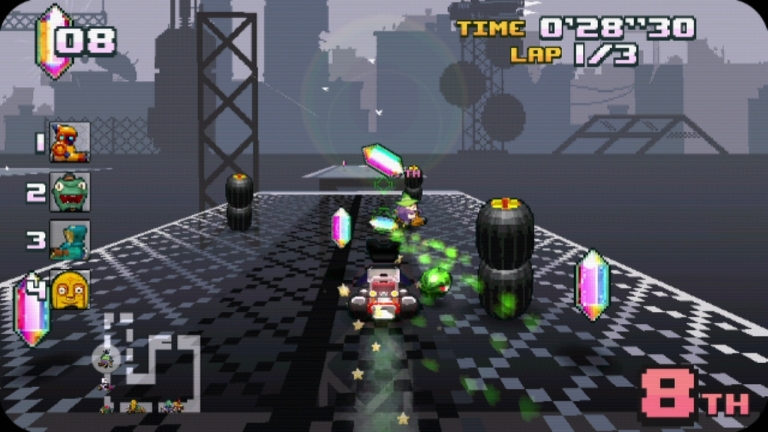 The beta version grants access to three of the final game’s eight total cups. Each cup consists of four races, with the Melon Cup being first, the Piney Cup being second and the third available Cup being fifth hardest. The Indie Cup takes a handful of indie games and puts their themed worlds into race tracks. They work shockingly well, with Toto Temple Deluxe fitting perfectly. It is full of road blocks though, and those will thankfully be toned down with a future update. The tracks are fun to race through and have a lot of perils that need to be avoided and sharp corners you’ll struggle with navigating through on the higher-end courses.

The final game will feature time trials and a battle mode, which should be far more satisfying than Mario Kart 8‘s if it’s patterned more after the original Super Mario Kart. While those aspects can’t be judged now, the core game can be thanks to the Grand Prix mode being playable. As expected, there are weight and speed tiers to the characters and a wide variety of weapons. Homing items and boost items are available alongside a boulder that can spin enemies out. O (360 A button) accelerates while A (360 b button) brakes, R jumps and L selects and uses weapons. Unlike the Mario Kart games, you can just hit the button instantly and have the weapon be selected in a pinch — you have to wait until the tumbler reaches its conclusion. The controls are nearly perfect aside from that, with a good blend of grippy and drifty for each character. 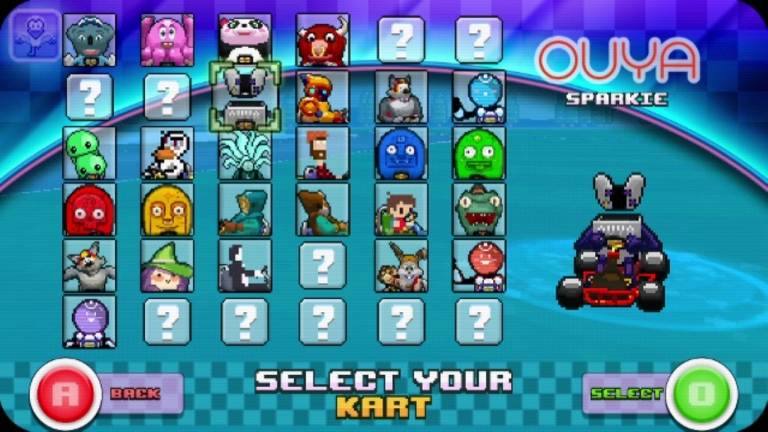 The roster is absolutely fantastic even in beta form. Beyond one of the 26 currently-playable characters appearing as a red dot, they all look great. The pixel art style used is nearly identical to what you would expect from a latter-day SNES game. However, the game moves at a much faster rate than the SNES could ever handle and uses things like bloom lighting and a lot of sky color gradience to give each stage its own atmosphere. In that regard, it’s more similar to Mario Kart: Super Circuit on the GBA, but with a massive improvement in all aspects of the graphics. Even at an early stage, there are no frame rate issues and character animations while moving the kart around and post-race elation are good examples of using limited animation to get the point across.

The use of indie game characters is brilliant because it prevents the issue of having a generic roster that is just lifeless (like about 70% of Diddy Kong Racing‘s cast). Everyone may not logically fit into a kart racing game, but it’s still pretty neat to have Elena from Whispering Willows duke it out on a gorgeous beachfront setting against A.R.E.S. That brings to mind the many beautiful little visual flourishes thrown into the backgrounds that make the worlds come alive. The beachfront stage has a yacht alongside a glistening and reflective water surface. The Fist of Awesome level matches the game perhaps better than any other available stage with its graffiti and bear-related storefronts. You can tell that a lot of care went into the stages and that gives the project a lot of credibility — it doesn’t just feel like they copied and pasted characters into random stages and called it a game. 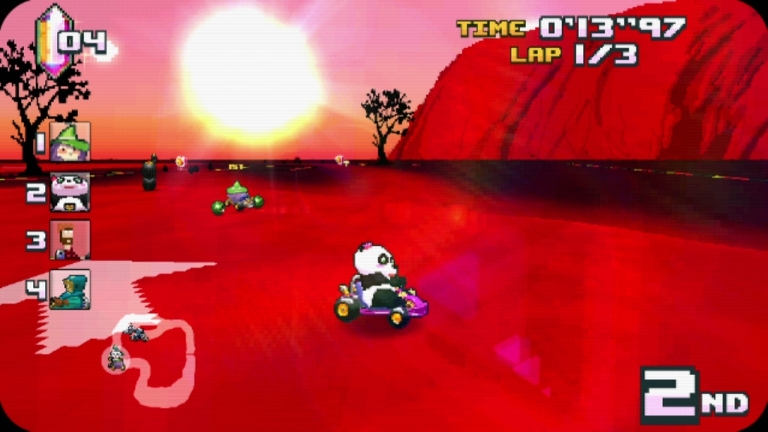 The voice clips are of a reasonably-high quality and aren’t overbearing. With so many characters here from obscure games, it was nice to get a small glimpse into their personality with the voice work. In a fantastic little touch, Pip from The Adventures of Pip actually evolves as he does in the game going from a red block and eventually becoming a boy. The developers captured every character perfectly in this 16-bit art style, which given how radically different that is from a point and click game like Read Only Memories, is quite an accomplishment. There’s even a playable OUYA console that garnered an instant chuckle as well as a handful of original characters that go beyond the regular indie game cast.

Super Indie Karts is current available on the OUYA in beta form and has also been Greenlit on Steam. It’s a bit strange that the only publically-playable version is on OUYA and not on Steam, but OUYA owners should definitely check this out at some point. The current barrier of $25 is a little bit much, but that will lower over time before reaching $10 in June. Even in its current state, it’s worth spending at least that much on it. Super Indie Karts is already a polished product, but it’s not quite a finished polished product. Still, the game is playable and impresses despite being limited, which is an excellent sign for the full game.