Toren wants very badly to be compared to ICO – that much is clear from its dark tone, its somber music, its subtitled gibberish language, and its child protagonist, who of course wields an oversized sword against shadowy monsters far bigger than her. Directly inviting such comparisons isn’t always wise – ICO is one of the all-time classics, and while many games take inspiration from it, few, if any, have managed to live up to it. Toren, sadly, does little to change this trend.

The game certainly has its moments. As it opens we see a sun mid-eclipse, and below it a blood-soaked warrior woman squaring off against a fearsome dragon whose breath turns all it touches to stone. A blessed sword is all that protects her from the vile magic, but it is knocked from her hands, and her body begins to petrify. In her last moments, it’s all she can do to send a scroll back to an ancient tower, Toren, where her reincarnation will soon be reborn. Thus begins the Moonchild’s fight, working through death after death, to free mankind from the dragon’s clutches.

On paper it’s a powerful, evocative concept, ripe with symbolism, that’s a perfect fit to the trial and error conventions that define the action adventure genre. In practice, the game is a bit of a mess – at least in its current stage of development. The game is pretty enough in screenshots, textured with a painterly style enhanced with half a dozen post-processing effects, but in motion it’s a huge letdown. Character animations are stiff and unnatural, and they only get worse when you start swinging your sword at monsters. Glitches are frequent and jarring – though that much can conceivably be chalked up to my playing an early build. 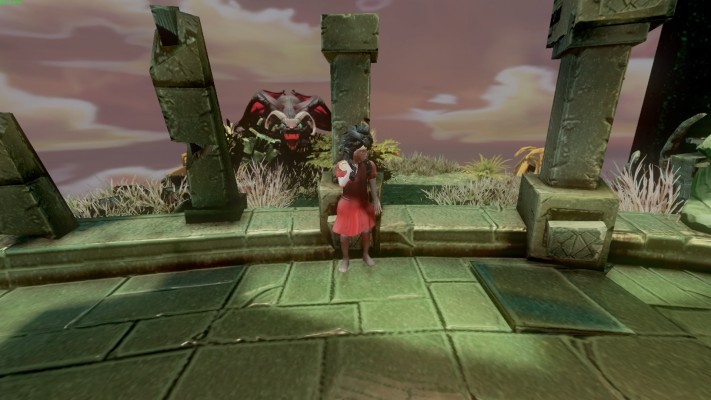 What can’t be excused is how Toren feels. The controls are sluggish and unresponsive, and the physics (which appear to be on Unity’s default setting) just seem off. The level pacing is also awful, involving far too much excruciatingly slow climbing and walking and watching scripted cutscenes, without any satisfying puzzles or encounters (at least, not in the section I played). The most tense moment is a run-in with the dragon before you can grab your sword, but it swiftly becomes apparent that it’s just a convoluted round of red light/green light. It’s hard to put a finger on what exactly is wrong with the game, but playing Toren just isn’t very enjoyable.

That’s a shame, because it has potential. The concept is interesting and a great fit for a video game, and the art style would be gorgeous if it weren’t let down by poor animation and technical gaffes. It also has a spectacular orchestrated soundtrack that calls to mind great works of epic fantasy. I hope that Toren can be fixed before it releases this year – or failing that, I hope that the game improves beyond what I’ve been able to play so far. It’ll never be ICO, but with some polish the Brazillian export could be quite moving in its own right.