Mortal Kombat X is a fantastic game; we already know that. It plays well, looks great and continues to improve upon the new fighting system established in the previous game, Mortal Kombat, in intelligent ways that keep the experience fresh. It remains one of the best fighting game franchises in years, and it’s one of the oldest, too, a true legacy name in the industry. But times have changed and Mortal Kombat has changed with it, and there’s no better evidence of that than the gross monetization of Mortal Kombat X.

From day one, Mortal Kombat X offers a wide range of paid content you can buy on top of the full price of the base game. You can buy a season pass of four additional characters and a handful of skins for $29.99, half the total price of the game itself. You can buy access to Goro, a staple character of the franchise who was locked off as a pre-order bonus, for $4.99. You can buy a “blue steel” skin for Sub-Zero, which helps fund the prize pool for an upcoming tournament, for $1.99. All of this stuff is pretty standard, if pretty expensive.

Then things get weird and depressing. 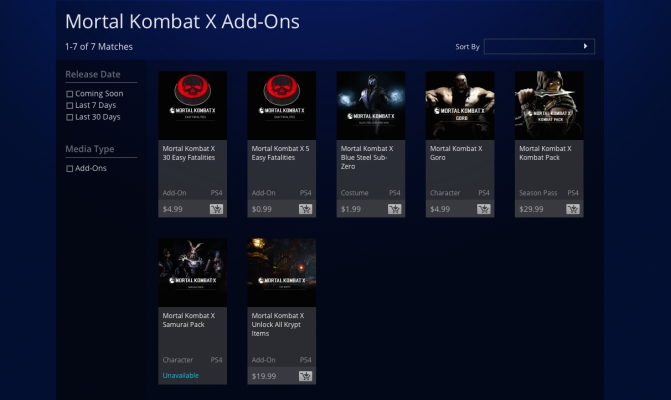 The game has a “Krypt” that serves as a hub for tons of bonus content, like additional skins for character, various items, and chests that contain “Krypt Koins,” the in-game currency you use to unlock items in the Krypt. It’s a detailed and expansive part of the game, but it will take most players a long, long time to unlock every single item in it. For players who don’t feel like playing for hours and hours to unlock everything, there’s the option to unlock it all for $19.99. It’s not as bad as charging for Krypt Koins themselves, but that’s still a third of the price of the base game just to unlock access to content you already purchased. It’s nothing new — lots of EA games have similar paid DLC unlocks — but it’s wildly, insultingly overpriced. Again, it’s content you’ve already purchased. Offering players without time or patience an option to unlock everything is great, but it should simply be a free in-game option for casual players rather than a fine.

And that’s not even the worst part. No, that honor goes to the “Easy Fatality” token packs. In the regular game, performing a Fatality, a brutal and elaborate finishing move to end a match, requires a player to tap out a specific button sequence from a designated distance from the opponent. Even though the game allows you to pause and look up the inputs, it can still be challenging to pull off on occasion. If you’d like, you can buy access to easy one-button Fatalities in packs of either 5 for $0.99 or 30 for $4.99. When you use them up, you’ll need to buy more.

Yes, there are paid consumables in a Mortal Kombat game now. 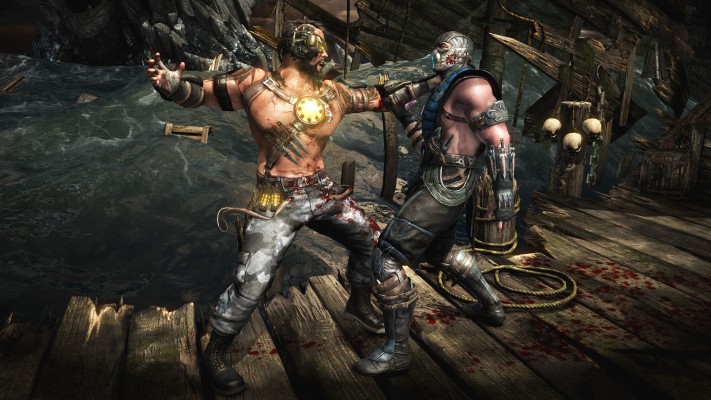 You could make the argument that Mortal Kombat, which began in arcades that tried their hardest to suck quarters from you, has always been like this, deep down. But it hasn’t. Arcades charged you by the pop for full access, not one big charge then again, over and over, for smaller chunks of the game, or access to easier inputs. To be clear, that means you’re not even paying for content there; you’re simply paying for specific inputs to be easier. Just look the Fatalities up on YouTube and save your money.

That right there is the crux of why this DLC is so bad, and why we need to push back against it. NetherRealm is charging us for new content with the season pass and the new characters, sure, and that’s new content they had to make that isn’t in the game you bought. It’s fair to charge money there, even if $30 is too high — you can buy full games, like the excellent Titan Souls, for half the cost of the add-on content for Mortal Kombat X. But much of the content being sold isn’t content at all; it’s access to content you bought already for a full $60. Unlocking all the content in the Krypt shouldn’t be a $20 download key; it should be a cheat code you have to enter every time you launch the game and doesn’t save so you can at least check everything out, even if it’s not permanently unlocked.

You shouldn’t have to pay endlessly for Easy Fatalities, either; there should just be a “casual mode” you can turn on for the benefit of your non-gaming friends who want to play, or even disabled people who want to give it a shot but precision isn’t really their strong suit. When NetherRealm announced easy Fatalities would be an option in the game, it recognized that many people would benefit from them:

“Now, we’ve learned through years and years of study that there are a lot of people who just can’t pull off Fatalities, or they get freaked out or they can’t figure out the timing,” Lansdown said. “So when the game launches, you’ll have a couple of those–maybe three of them–day one. You’ll have those just to use and do easy Fatalities on.

“There are certain places you can unlock those and things like that. So you’ll always have access to easy Fatalities–if you want to use them.”

NetherRealm just didn’t mention that easy Fatalities would cost you money. Bayonetta offered an incredibly easy mode that lets players essentially just continually tap a single button to victory and didn’t charge a dime for it; Mortal Kombat X is only too happy to charge you for that privilege, forever. 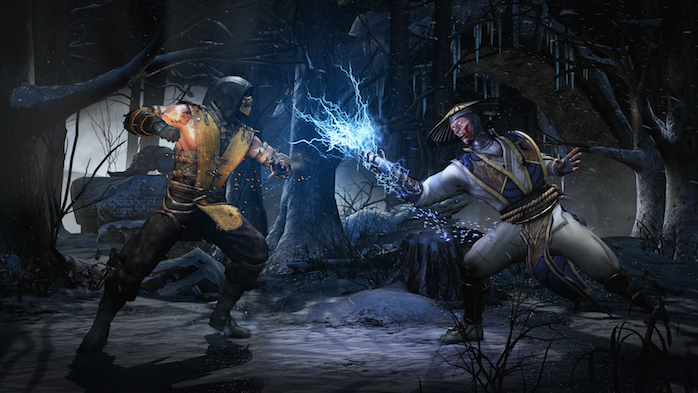 It’d be a much different story if Mortal Kombat X launched with a reduced price, a free-to-play model, or any kind of business model that didn’t involve “pay us the standard $60 for the game, then we’ll nickel and dime you on top of that,” but that’s not the case here. It’s a real bummer that on day one, Mortal Kombat X has $62.94 of paid add-ons listed, more than the price of the game itself, and some of those add-ons can be purchased infinitely.

The gross monetization of Mortal Kombat X has left such a bad taste in my mouth that despite loving the previous game and really excited for this one, I’m not going to play it. It’s a bummer, but you really do vote with your dollars in this industry, and my vote is that this kind of monetization is unacceptable and demonstrates a disgusting level of greed. I want to curb it here. Maybe in 10 months I’ll get whatever the “Game of the Year” or “Ultimate” or “Definitive” edition of the game turns out to be that packs in all the paid add-ons, patches, refinements and tweaks the game will have seen by then, all for a reduced price. Maybe not.

If you’re fine with this kind of business model infecting your games, that’s your choice, but if you’re like me and you think this trend has gone far enough, and that Mortal Kombat X‘s eagerness to charge absurdly high prices for new content and the existing content you already paid for is too gross for you to stand by, then vote with your dollars. Don’t buy it. Otherwise, it’ll only get worse from here — that’s how we got here, with $4.99 packs of Easy Fatalities.