Odds are better than average you’ve got two eyes and they sit on the front of your face looking at things, day in and day out.  Like any aspect of your body, though, if left unexercised they get lazy, just seeing things and processing the same old data endlessly.  That’s why they need you to wander over to itch.io and download the pay-what-you-want (all the way down to $0) vertical shooter Hyperspace Invaders II.

Hyperspace Invaders II is a simple little shooter that doubles as a techno-driven lightsynth, crushing the screen with patterns and colors and enemies and firepower with wild abandon.  The basic shooting mechanics are maybe a bit simplistic and the ship could stand to move a hair faster, but this is about providing a musical light show as much as a super-challenging shooter, so the game gets away with it by sheer audiovisual exuberance. 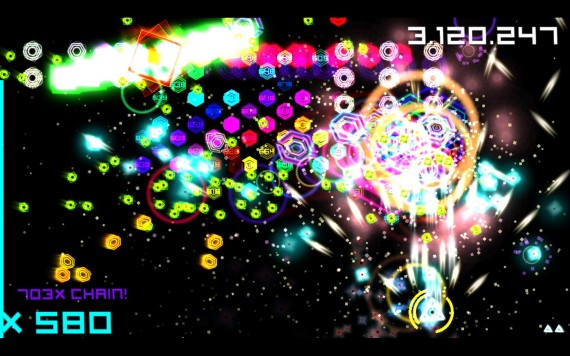 You’ve got a little triangle with a very forgiving hitbox, constantly auto-firing an endless stream of bullets, and the blue spheres that power up the gun and add to the bonus multiplier home in on the ship instantly after destroyed enemies drop them.  Other enemies drop larger yellow stars that need to be collected manually, adding a temporary spread-shot to the gun’s normal arrow-straight laser.  Finally, you can hold down the fire button to concentrate the laser into a stream that cancels enemy bullets, clearing a path through the crowded screen but also eating up your multiplier.  And that’s it for mechanics.  Hose down the screen, dodge, go easy on the bullet-canceling if you’re aiming for a decent score, survive until the end of the song.  Also, and this can’t be stressed enough, remember to blink.

What Hyperspace Invaders II lacks in gameplay complexity, it makes up for by being a sheer crazed lightshow of pulsing colors, effects, strobing action, and intense visual feedback.  The fun of the game comes from sinking into the experience of sound and light, and while the shooting isn’t easy once you’ve cleared the first few levels, the memorable part is just how damn good everything looks.  Enemies pulse to the beat, background effects ripple and dance, mini-bosses throw out waves of geometric patterns, and everything is tuned to make the soundtrack feel as good as possible.  While I suppose technically this means that Hyperspace Invaders II is an album of nine techno tracks in the shape of a video game, I’m having a hard time thinking of this as any kind of problem.  It sounds great, plays well, and will leave your eyeballs a matched set of smoking craters in the pit of your skull.  Which, admitted, makes it hard to get the poor things properly exercised, but at least they got to process all the colors in the world at once before they blew out.

Hyperspace Invaders II is available over at itch.io.  Give it a look, and if you like it, maybe toss the developer a few dollars for their hard work.